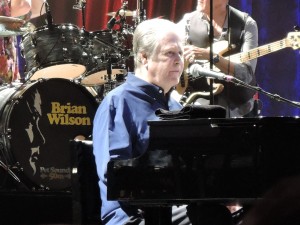 Brian Wilson’s masterpiece “Pet Sounds” – arguably one of the best albums ever made – was released 52 years ago this month by the Beach Boys. And as great as that album is, there’s a song on it that just doesn’t fit on the album, according to one of the band members.

The story of “Pet Sounds” is well chronicled. By the mid-1960s, Brian had tired of touring with the Beach Boys and wanted to stay in California, writing and arranging new music for the band. He was growing as a songwriter and producer and wanted to focus more on those aspects of the music industry.

To fill in for Brian on tour, the Beach Boys first hired Glen Campbell, who had been a member of the famous “Wrecking Crew,” a group of brilliant Los Angeles studio musicians who were used by a lot of artists for their studio albums in the 1960s.

Playing bass guitar and singing some of Brian’s high falsetto parts, Campbell toured with the Beach Boys from December 1964 through March 1965 before deciding to leave the band and focus on a solo career. (Campbell was, however, among the Wrecking Crew musicians who played on the “Pet Sounds” recording sessions that started on July 12, 1965 and didn’t finish until April 13, 1966.) 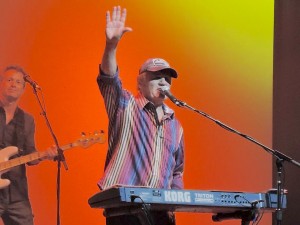 The Beach Boys now needed someone to fill in for Campbell on tour. So Mike Love called Bruce Johnston.

Johnston was an on-staff producer at Columbia Records, which was also the Beach Boys’ label, and he had met all of the Beach Boys. At the time, Johnston was working with Terry Melcher – the son of actress Doris Day – producing a song called “Hey Little Cobra” for the Rip Chords, on which Johnston and Melcher also added their own vocals. The song would spend 14 weeks on the Billboard Hot 100 singles chart in 1963, peaking at No. 4.

After that song hit, Melcher was assigned to work with a new band called the Byrds, a five-piece group that featured Roger McGuinn, Gene Clark, David Crosby, Chris Hillman and Michael Clarke in its original lineup, that had formed in 1964.

So Johnston was looking for his next project when the call came from Love. 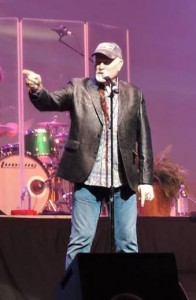 “I was consulted by Mike, who I knew. He said ‘Glen Campbell was supposed to go on the road with the Beach Boys and he can’t and Brian is in the studio. Who do you know who can fill in for us?’” recalled Johnston during a series of interviews he did for The Vinyl Dialogues book series. “I called 10 people and nobody was available. So I said to Mike, ‘Look, the best I can offer you is me and I can get to airport.’ That’s how I got started with the Beach Boys.”

Johnston joined the touring band in April 1965 and also started appearing in the recording sessions as a vocalist. The first vocal recording Johnston made with the band was “California Girls,” which appeared on the “Summer Days (And Summer Nights!!) album, released in July 1965.

“Probably one of the smartest things they ever did was take Brian off the road so he could realize his genius in the studio,” said Johnston. “The first year I was with with Beach Boys we did three albums. Did I think that was unusual? No. I wasn’t the guy who had to struggle like Brian with writing the songs, arranging them and producing them. All I had to do was come in and sing. You can imagine that Brian had to do all that and go on the road. He just couldn’t do it, it was too much for him.”

It was around this time – in the summer of 1965 – that Brian started the preliminary recording sessions for “Pet Sounds.” By the end of that year, Brian had heard the Beatles’ “Rubber Soul” album and it had added even more inspiration for him during the creation of “Pet Sounds.” 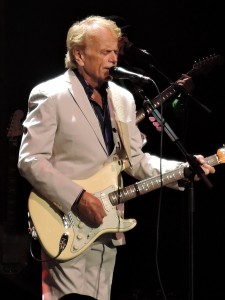 Original Beach Boys guitarist and vocalist Al Jardine really liked the song “Wreck of the John B,” which had been a hit for the Kingston Trio. Jardine had a folk music background and persuaded Brian that the song would work with a Beach Boys treatment, with a five-part vocal arrangement. The band finished the vocals for the song, called “Sloop John B.” by December 1965, and then left in January 1966 for a 15-gig tour of Japan, leaving Brian in the studio to continue work on “Pet Sounds.”

Carl Wilson and Dennis Wilson kept in touch by phone with Brian while the band was in Japan and Brian would send them acetate recordings of what he and the Wrecking Crew had been doing in the studio for “Pet Sounds.” One of those recordings was of “Sloop John B.” featuring the backing tracks that the band members had previously recorded.

When the Beach Boys returned from Japan and got back into the studio to hear what Brian had been doing with “Pet Sounds,” it was different than any other Beach Boys album to that point. The only thing that sounded like the Beach Boys previous recordings was “Sloop John B.”

And that’s the song that Johnston doesn’t think fits on “Pet Sounds.”

“What does it have to do with that album?” said Johnston. “Nothing.”

The suits at Capitol Records disagreed. They were demanding a single and “Sloop John B.” was the closest thing to a Beach Boys-sounding track that was finished while work continued on “Pet Sounds.” So the record company released the song, but it gave the public no real idea of what was to come on “Pet Sounds.”

“So we had ‘Sloop John B.’ come out in the middle of making ‘Pet Sounds.’ It’s a brilliant record, but it just doesn’t fit on the album,” said Johnston. “Brian was thinking more thematic.”

Interviewing Bruce Johnston before a Beach Boys concert in 1986 in Rockford, Illinois.

History would prove Johnston correct. The inclusion of “Sloop John B.” on the “Pet Sounds” album somewhat contradicts a later interpretation of the record as a “concept” album.

But “Sloop John B.” performed well on the singles charts, peaking at No. 3 on the U.S. Billboard Hot 100. Another single released from the “Pet Sounds” album to chart was “Wouldn’t It Be Nice,” which got to No. 8 on the Billboard chart and No. 7 on the U.S. Cash Box Top 100 chart. The album itself made it to No. 10 on the U.S. Billboard 200 albums chart.

The B side of “Wouldn’t It Be Nice,” released two months later, was “God Only Knows” – a song that Paul McCartney called his favorite song of all time – would reach No. 2 on the United Kingdom singles chart, but could only get as high as No. 39 on the U.S. Billboard Hot 100 songs. The song features Carl Wilson on lead vocals, with both Brian and Bruce on backing vocals and is considered by some as one of the most beautifully composed and arranged songs in the history of pop music.

In the ensuing years, “Pet Sounds” has also been recognized as an ambitious and sophisticated work that advanced the field of music production.