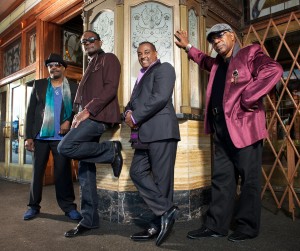 Ronald Bell was sitting at the piano one day when his brother Robert “Kool” Bell walked in.

“You got anything for me?” said Ronald Bell.

“Yeah, I got two things for you,” said Robert Bell. “Hanging out. And ladies night.”

“A lot of people hang out,” said Robert. “But Ladies Night, man there’s one of those everywhere in the world. That’s gotta be a hit.”

But from 1974 through 1978, Kool & the Gang hadn’t been able to really capitalize on that success, and the band’s label, De-Lite Records, was looking for more hits from the group.

“Initially there was pressure to make a hit. But what is a hit? We had no clue. Not really. We understood we had to make a commercial record. We were familiar with the whole commercial part of it. But we were in it now, so let’s make something happen,” said Ronald Bell.

It would take a reality check, though, to help the band back on the road to the top of the charts. That happened at an in-store promotion in Jersey City in the late 1970s. Only one person showed up to the store to see Kool & the Gang and she was less than impressed. She referred to the band as “old hat.”

Some changes needed to be made. Kool & the Gang had started as an instrumental-driven jazz and funk band that featured a lot of street hollering and chants, but hadn’t to that point in the late 1970s featured a dominant lead singer.

The band needed a lead singer along the lines of Lionel Richie of the Commodores or Maurice White of Earth, Wind and Fire. So they hired James “J.T.” Taylor to handle the lead vocals and went to work on trying to write hit singles.

“We were in pursuance of doing something really great. We didn’t have a lead singer, we were doing some experimentation at the time and disco was alive,” said Bell. “We had to come up with something that worked.”

So when Robert “Kool” Bell mentioned the phrase “Ladies Night” to Ronald Bell that day, something clicked for the songwriters.

“We all made the connection, and we went in hard and came up with the song ‘Ladies Night.’ That was a peak moment, that album with a new lead singer,” said Robert Bell.

And the single “Ladies Night” would lead to the band’s next hit, which would become its signature song.

In “Ladies Night,” the female background vocalists can be heard singing, “Come on, let’s all celebrate.” And the pressure was even more intense from the record company for the group to follow up “Ladies Night” with another hit single.

Ronald Bell had been reading scripture about humans being created and the angels celebrating the creator for doing so. And he still had the line “Come on, let’s all celebrate” from “Ladies Night” fresh in his head.

“I don’t care where we are in the world, people respond to that song,” said Bell. “It’s a beautiful thing to see that, where everybody is just dancing and celebrating to that song. We can’t play a song after that one.”

Bell said that with both “Ladies Night” and “Celebration,” he had a sense that both songs would be good for Kool & the Gang.

“There was one of those (a ladies night) everywhere, so why wouldn’t that be a hit?” he said. “Plus, ladies buy records like that. Guys don’t go in hard on those kind of records. This was a tribute to ladies and I thought, this is definitely gonna work.And then ‘Celebration’ came from the thought of ‘Ladies Night.’”

For many of the Kool & the Gang songs, the Bell brothers and the other members of the band shared writing credits, something that Ronald Bell said the band had collectively decided from its inception.

“We decided to share our writing with each other. I was the primary writer. I was focused primarily on making hit records,” said Bell. “We did that and still do that. You might see my name on a lot of the hits, but you see Kool & the Gang also. We shared that with each so that when we got this old, that we would be all taken care of in some kind of way. And we continue that kind of mindset to this very day. There are no regrets with that.”

Bell added that sharing spirit has been the critical element of the group’s success.

“It was a collective creative effort – collective with a K – that was the genius of the band the Kool & the Gang,” he said.