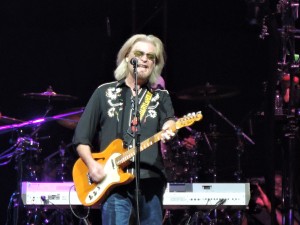 Even though both Daryl Hall and John Oates are credited with writing “Sara Smile,” it’s a Daryl Hall song.
(Photo by Mike Morsch)

Daryl Hall was living on the Upper East Side of New York in 1975 when he and John Oates began producing material for the “Daryl Hall & John Oates” album – which would come to be known as “The Silver Album” because of its glam rock style cover. Living with Hall at the time was his girlfriend, Sara Allen.

Oates had introduced Allen to Hall a few years earlier. According to Oates, he had met a flight attendant – called “stewardesses” in those days – and a girlfriend of hers on the streets of New York and had struck up a conversation with them. One of those flight attendants was Sara Allen.

Oates eventually took that chance meeting and turned it into a song titled “Las Vegas Turnaround” that appeared on the duo’s second album, “Abandoned Luncheonette,” released in 1973. He also eventually introduced Hall to Allen.

By 1975, Allen and Hall were a few years into a personal relationship that would end up lasting more than 30 years. And Hall was inspired enough by his feelings for Allen that he wrote a highly personal song, one that would end up being on “The Silver Album.”

“It was a song that came completely out of my heart. I’ve said this many times – it was a postcard. It’s short and sweet and to the point,” said Hall.

But there was no big first-time reveal of the song to Allen.

“She was there, in the house. I was just writing the song. I don’t think there was a first time that I played it for her. She listened to the evolution of the song,” said Hall.

Both Hall and Oates are credited as writing the song but it’s a Daryl Hall song, according to Oates. 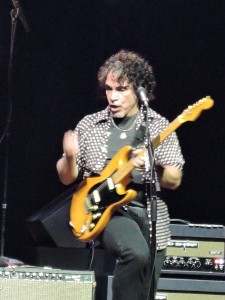 “When you think about that song, the one thing you have to understand about Daryl and I and our songwriting process is that if one of us kind of had a handle on the idea, the other one would help and kind of function almost like an editor, to help make the song happen.” said Oates. “It could have been as simple as throwing out an arrangement idea or it could have been a 50-50 collaboration or anything in-between. There were no rules involved with any of this stuff.”

Oates said Hall had the song, the music, the chord changes, he was singing the melody and had the chorus.

“Over the years, I’ve always just tacitly acknowledged that it was his song, because it was. But he and I wrote the lyrics together,” said Oates.

But it was two Oates songs – “Camellia” and “Alone Too Long” – that were slated by the record company to be the two singles released from “The Sliver Album.” At that point in the process, “Sara Smile” wasn’t being considered for release as a single.

“When ‘Sara Smile’ was recorded, it was probably tracked in a half hour at the most. Daryl did all the vocals. In fact, the lead vocal is a live vocal tape. We punched in one word, the first ‘Sara’ before the first chorus because it was flat,” said Barry Rudolph, the engineer on the album. “Daryl is very much a live and immediate artist; he’s not much for punching in lead vocals. Backing vocals are different. But he really was a real-by-feel kind of singer.”

But Chris Bond – who co-produced the album with Hall and Oates – and Rudolph didn’t think “Sara Smile” was destined to be a single from the album.

“The first time I heard ‘Sara Smile,’ I thought it was a really neat song. And that’s all I thought about it. But it did definitely belong on this record,” said Bond.

“To be honest, everyone kind of thought that ‘Sara’ was a really cool kind of album cut. It was a really nice song and everyone loved working on it,” said Rudolph. “It was a very simple production, a very simple song. Daryl said to me, ‘When we do the backing vocals, I want it to sound like the Dells.’ I said OK. I sort of knew who they were.”

“When I heard the playback the first time of the first take that we’d done of ‘Sara,’ I thought oh, something was happening,” said Bond. “I’m sitting in the control room thinking to myself, oh my God, to me this sounds like a hit record. But everybody kept  insisting the hit single was ‘Camellia.’ This was the 1970s. Albums all had concepts – that’s what it was all about. And the concept with ‘Sara’ was that it was like an Al Green song. I wanted it to sound like an old Al Green song from Memphis.

Once “The Silver Album” was released, the two singles, “Camellia” and “Alone Too Long,” did OK on the charts, but nothing spectacular. At that time in the music business, according to Oates, artists had to give a single six to eight weeks to see if it would make the charts and get regular radio play.

“By the time those two singles had been released – the album had been released prior to that – you’re talking about being into this album for more than six months. At that point in our careers, six months was an eternity. We were already getting ready to make a new record,” said Oates.

Still, RCA had no intention of releasing a third single from “The Silver Album.” (I interviewed Hall, Oates, Bond and Rudolph about the making of that album, which is featured in “The Vinyl Dialogues Volume III: Stacks of Wax.”)

But while the duo was touring, a disc jockey on a small R&B radio station in Toledo, Ohio, decided to start playing “Sara Smile” as an album cut – just because he liked the song.

“Simple as that. And as soon he began to play it, the phones lit up, people kept calling and asking, ‘Who are these guys, what is this song that you’re playing and where do we get it?’” said Oates.

But Bond and Rudolph remember the “Sara” story differently.

“The story goes that Tommy Mattola (the duo’s manager at the time) took a second loan out on his house and borrowed a bunch of money and basically got the top 10 stations in the country to play ‘Sara’ in regular rotation for a week. And that put it over the edge,” said Rudolph. (I was unable to confirm that version of the story with Hall, Oates or Mattola.)

Nevertheless, word of the song’s popularity in Ohio quickly got back to RCA offices in New York and the record company officials decided to release “Sara Smile” as the third single off “The Silver Album.”

Hall & Oates were touring England when “Sara Smile” broke in the R&B world, becoming a hit on African-American radio. The song then crossed over into mainstream radio and became a pop hit as well.

“I will never forget the first time I heard it on the radio,” said Hall. “I was in California. I heard it on the radio amidst all the other songs, and I thought to myself, ‘This doesn’t sound like anything else that’s being played around it.’ It was totally unique and stuck out like a sore thumb – well maybe not a sore thumb – but it stuck out. I have a distinct memory of that. I’m sort of proud of that idea.”