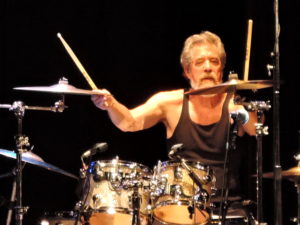 It was a long drive, negotiating traffic in some of the major metropolitan areas on the East Coast – Washington, D.C., Baltimore, Philadelphia – all in the same day, just to see one of my favorite bands.

But oh my, what a sweet and memorable payoff.

We had taken our daughter to the nation’s capital to start her college career at Catholic University (Motto: Don’t Even Think About Drinking a Beer on This Campus). It was a highly emotional couple of days, as these things tend to be when one sends a child away to college. Two-and-half days of orientation, priests dressed like the San Diego Padres mascot and me threatening any young man who dared cast a leery eye in our direction (My motto: If You Even Think About Laying A Hand on My Daughter, I Will Snap Your Arm Clean Off Your Body and Shove It in Your Ear.)

An interview with Clifford about the music and the making of the 1970 CCR album “Cosmo’s Factory,” Clifford’s namesake album, is included in The Vinyl Dialogues. So I wanted to see the show and meet Doug and hopefully Stu at the meet-and-greet before the show.

Now it sounds like a long way from Washington, D.C. to Atlantic City, N.J. and it is a couple hundred miles. Add in the concentration of people along the route – through Baltimore and Philly – and it became an even more challenging drive to make it in time for the meet-and-greet before the show.

But we negotiated the trip successfully, despite getting late word that the before the show meet-and-greet had been canceled by the Tropicana (Casino motto: Let’s See if We Can Make Mike Drive All This Way in The Rain and Traffic to Not Meet His Favorite Musicians and Still Get Him to Drop A Few Bucks in the Slot Machines.)

Disappointment, but no worries. We still had the show.

And what a show it was. Doug and Stu still got it and they’re still having fun, 53 years after they first met. They were 13 years old then, and they’re both now 69 and they look fabulous. They play even better.

Not only that, but they’ve surrounded themselves with other great musicians as well, including lead singer John Tristao (that guy can sing), lead guitarist Kurt Griffey (that guy just flat-out jams) and multi-instrumentalist and vocalist Steve Gunner (that guy does it all). (Motto: We Don’t Need John Fogerty.)

(Editor’s note: No disrespect to John Fogerty. He wrote a lot of great songs during the CCR era.)

Coming off an emotional few days with that whole college thing, my wife and I were ready to just relax and listen to some great music. Revisited played all the hits, including some of my favorites like “Hey Tonight,” “Have You Ever Seen The Rain,” “Down on the Corner,” “Who’ll Stop The Rain” and “Lookin’ Out My Back Door.”

And, of course, “Proud Mary.” That’s when it hit, all of a sudden out of nowhere, and tears started streaming down my face. “Proud Mary” doesn’t strike me as a particularly emotional song, but it was one of my parents’ favorite songs. My dad couldn’t carry a tune in a wheel barrow, but I remember him singing that song in the car along with the radio. (Dad’s motto: I Don’t Care That I Can’t Sing for Shit, I’m Singing Along With This Song Because it’s Just That Good.)

I recall my parents dancing to that song every time it was played by cover bands in the early 1970s at the Moose Lodge in Pekin, Illinois, where we’d go on Friday nights because it was catfish dinner night at the lodge and my folks loved to dance and eat catfish.

My dad died in 2006. But I called my mom the next day and told her about the show, and she reminded me of the Moose Lodge story. She remembered dancing to “Proud Mary,” too. (Mom’s motto: I Still Love Catfish and CCR.)

We did get a chance after the show to go to the dressing room and meet Doug and Stu. They are class acts and everything you’d want your musical heroes to be when you get the privilege of meeting them. Friendly, down-to-earth and engaging.

Thanks Creedence Clearwater Revisited. That was worth the long drive, right there, that memory and those tears.

And it reminded me, once again, that I truly am the fortunate son.