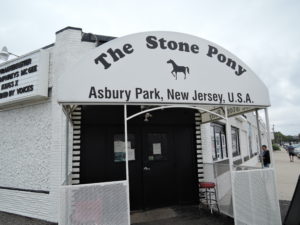 It was a theory that had at least the hint of possibly coming true.

There’s a chapter in The Vinyl Dialogues, featuring an interview with Rock and Roll Hall of Famer Steven Van Zandt of Springsteen’s E Street Band, that details the evolution of Southside Johnny and the Asbury Jukes in the mid-1970s, the influence of Springsteen on the band and the development of what we now know at the Jersey Shore Sound.

Over the years, it has not been uncommon for both Springsteen and Van Zandt to join Southside on stage, especially when the band is playing in or around Asbury Park or specifically, at the Stone Pony.

There’s a lot of rock and roll history that’s been made at the Stone Pony. So when I saw that Southside and the Jukes were scheduled to perform at the venue’s summer stage on July 3, I said to myself, “Hmmm. I wonder . . . .”

Let me state upfront that I’ve never seen Bruce Springsteen and the E Street Band or Southside Johnny perform live. I know, I know, shame on me. My only excuse is that I grew up in the Midwest having no idea about anything New Jersey. So I came very late to the Springsteen-Van Zandt-Southside party. (I’m still not at the Jon Bon Jovi party yet.)

The point now is that I’m all-in with everything Springsteen. I’m listening and learning and enjoying all the music that I missed the first time around, starting with the early Springsteen and Southside stuff from the 1970s.

So the plan for the Southside concert was a no brainer: Seeing Southside Johnny for the first time at the historic Stone Pony. I wouldn’t want to have seen him at any other venue the first time. (John Cafferty and the Beaver Brown Band, from “Eddie & The Cruisers” fame, was the opener.)

But in the back of my mind, I wondered: July 3 was on a Thursday, the start of a long Fourth of July four-day weekend. Maybe, just maybe, Bruce – who had finished his 2014 tour – would be hanging around Asbury Park with the family. Or maybe Van Zandt was in the neighborhood. And maybe they both didn’t have anything else to do that evening. Would it be possible that one or both of them would stop by and do a few songs with Southside in their old stomping grounds?

It had happened before at the Stone Pony. The odds seemed, at the very least, plausible.

And then Mother Nature interfered, the ratfink. It rained like hell on July 3, so much so that the Stone Pony management canceled the show since it was at the club’s outdoor summer stage, which offers no protection from the elements.

Fortunately, the show was rescheduled for Aug. 2, a date that was open on the schedule. Once again, Mother Nature threatened to interrupt the proceedings with a lot of threatening skies, but the rain held off.

The Stone Pony itself is old and it needs some work. It’s a club, not Radio City Music Hall. The ceiling is half falling down in places and people still spill beer on its floor. The summer stage outside is a general admission ticket and fans have to stand for the shows. Fortunately, you can pay an extra fee and sit in a small grandstand, which we did because my wife and I have determined that the days of standing through entire concerts has long since passed for our knees and hips.

Southside Johnny and the Asbury Jukes at the Stone Pony – a real rock and roll show. It was excellent and just what I hoped the entire experience would be.

Oh, neither Springsteen nor Van Zandt showed up. I was looking for them when Southside started singing “I Don’t Want to Go Home.” That would have been some serious gravy had they popped up on the stage at that point, huh?

But Southside Johnny and the Asbury Jukes had this one. It was homefield advantage all the way for them. And it was just that cool, even without those other two guys.