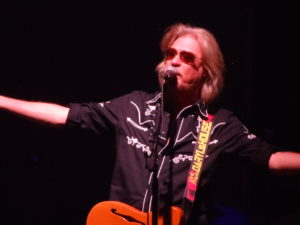 If you’re going to be a cover band that plays in Montgomery County, PA, and you’re going to include a Hall & Oates song in your set list, then at the very least you ought to know all the words to the song.

See, Montgomery County – north and west of Philadelphia – is the sweet spot for Hall & Oates. John was raised in North Wales, PA, and Daryl grew up near Pottstown, PA, just 15 or so miles further west. Both are in Montgomery County.

It’s the home turf if ever there was a home turf for the Rock and Roll Hall of Famers.

When I moved to Pennsylvania in 2000, I lived in Royersford, PA, a little closer to the Hall family homestead than the Oates territory. In fact, my house was only a few miles from the final resting place of the “abandoned luncheonette,” the one that graces the cover of the 1973 Hall & Oates album of the same name. The structure itself was long gone by the time I got here, having been destroyed in a controlled burn by the township in the early 1980s. (Daryl and John talked extensively in separate interviews about the making of “Abandoned Luncheonette” in “The Vinyl Dialogues.”)

Several years later, I moved to Montgomeryville, PA, but my mailing address is North Wales, PA, the same place where Oates’ parents still reside to this day.

Outside of this area, the rest of the world knows Hall & Oates as Philly guys. But for those of us who call Montgomery County home, they’re our guys.

So as it often does, Saturday Night Date Night this week included dinner and a local show. My wife and I are supporters of local musicians and we enjoy the artists that grace the Philly music scene.

I’m not going to name the venue – although it was smack dab in the middle between Oates’ North Wales and Hall’s Pottstown. We’ve enjoyed several good bands there over the years. And although I should, I’m not going to name the band, because I respect the effort that it takes to put oneself out there in front of people and create music that is going to entertain them. It’s not as easy task for any number of reasons.

But if you’re going to cover a Hall & Oates song in Montgomery County, PA, the lead singer should at the very least know all the words to the song the band is covering. Did I mention it’s the very heart of H&O territory?

So when the four-piece group broke into the opening of “Sara Smile,” my wife and I looked at each other and smiled. We love Hall & Oates and we love that song. It’s arguably one of the most – if not the most – recognizable songs in the vast H&O library of great songs.

(In fact, I wanted to name by first daughter Sara Smile, but it was a different decade, a different wife and a different set of circumstances. She’s 26 years old now, and her name isn’t Sara Smile, but she knows that story. And just last year she and I went to a Hall & Oates concert in Atlantic City, N.J. When they played “Sara Smile,” she laid her head on my shoulder for the entire song. It’s a quaint little family story and it provided us with a special father-daughter moment.)

As it became painfully apparent that this version of “Sara Smile” was going to fall far short of our expectations, I leaned over and whispered in my wife’s ear.

“These guys really shit the bed on this song,” I said, trying to prevent my beer from shooting out of my nose and into her ear, further ruining the moment even more.

“Ya, they’re not very good,” she whispered back.

So we left. It was just too much for our Hall & Oates sensibilities. It was so bad that we yukked it up all the way home.

While writing this, I mentioned to my wife that I couldn’t think of an appropriate ending for this story.

How about “They sucked,” she said.

You know, if you want to be free, all you got to do is say so.