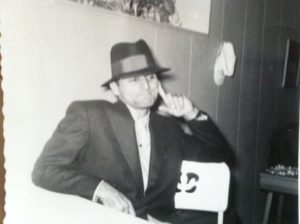 My dad, Edward E. Morsch, circa 1956 or so, looking much more like a mob boss than an elementary school superintendent.

This isn’t a music-related post. It’s just a fond memory of teenage love, school teachers in tight pants and a mob boss existence in a much simpler time.

My dad was a school superintendent in central Illinois, where I grew up. We lived in his district, so when it was time for me to start at Rankin Grade School, a small rural school grades K through 8, he sat me down and had a talk with me.

See, he was the boss at school (at home, too, but that’s another story). It was the mid-1960s and in those days, the school superintendent was like a mob boss. What he said was the law. He wasn’t a big guy, maybe 5’10” and 165 lbs. But he walked around that school like Andre the Giant. Every kid, teacher and parent in that district knew it.

If you were a student and stepped outside his rules, he had a paddle in his office. And believe me, he was a baseball player, so he knew how to swing a piece of wood.

So on my first day of school in 1965, he sat me down for a little talk. You know how the mob boss kind of whispers in a guy’s ear? That’s how this talk went down.

“Young man,” he said, coffee breath right in my face. “I want you to understand that if you get in trouble at school, you’re going to get in trouble again when I get home.”

Even in my 5-year-old pea brain, it didn’t make much sense to get two punishments for the price of one infraction. So I kept my nose clean for eight years at his school.

By the time I had reached eighth grade in 1972, I had begun to notice girls. In fact, I had a girlfriend that was already a freshman in high school, Patti Flynn. Man, she was so pretty. I was maybe 13 years old and didn’t quite understand why I liked girls, I just knew that I did.
Our eighth grade teacher was a divorced woman named Mrs. Muren. Thinking back, she must have been in her mid-30s at the time. I didn’t much care for her as a teacher, but I and the other 13-year-old jamokes did on occasion sit up and take notice when she wore a particular pair of white, very tight pants. We didn’t know what the hell we were looking at, but we liked what we thought we were seeing. (This may explain why to this day, I’m an ass man.)

Nevertheless, I was head over heels for Patti Flynn. Mrs. Muren and her tight, white pants were only a distraction. I got to kiss Patti Flynn.

So one day in class, I was daydreaming about Patti while I was doodling in my notebook. Actually, I was a writer back then, I just didn’t know it.

With true Hemingway pinache, I wrote in my notebook, “Mike loves Patti.” (It was, after all, only the beginning of a writing career.)

At that point, I sensed something was amiss. I glanced up out of my stupor to see Mrs. Muren standing right over my desk, eyes glaring.

“Give me that note, young man!” she screamed at me.

Now remember, I had gone almost eight years without getting in trouble at my dad’s school. That was about to change.

“No ma’am I’m not going to give you this note,” I said, as I crumpled up the piece of paper with my declaration of love for Patti Flynn and shoved it into my pocket.

“Get out into the hall!” screamed Mrs. Muren. All of a sudden her ass didn’t look so good in those pants after all.

Now at our school at that time, the “hall” was actually the gymnasium. If one stepped outside the classroom, one set foot right onto the basketball court. There were four classrooms like that just off the gymnasium. But the gym was also the center of the universe then at Rankin. If one was going anywhere in that small school, one was passing through the gym.

There I was for all to see, standing there like a mope, trying to figure out as fast as I could how to dispose of the incriminating note.

My first thought was if I eat the note, then there’s no evidence. That made sense. But eating paper and ink didn’t. So I opted for the next best solution I could come up with on short notice: I folded up the paper, took off my shoe, shoved the note down my sock to the bottom of my foot, and put the shoe back on.

Just as I had completed that task, I saw my dad come through the doors at the other end of the gym. He was walking with a purpose, and obviously going to some other part of the building on some other important duty.

Until he saw me standing outside the classroom. Then he made a beeline right in my direction. With a purpose.

Here was another thing about my dad at that time: You just didn’t lie to him. I didn’t think twice about lying to Mrs. Muren or defying her orders. But not with the old man. That just didn’t happen.

“I wrote a note in class and Mrs. Muren wanted me to give it to her but I didn’t want to do that so she screamed at me and sent me out here,” I rambled.

“What did the note say?” he asked.

Shit.
“It said, ‘Mike loves Patti,’” I said without hesitation. Gave it right up to the boss.

“Well . . . don’t do it again,” he said, pivoting on one foot and heading back to the task at hand. He didn’t even ask for the note.

That’s the other thing about my dad. He was the sweetest guy in the world and had a great big heart, especially for his children. And for the children in his care at school. He could be tough when he wanted to or had to. But those other times, he was just a softie.

I had kept my record in tact – for the most part – of not getting in trouble at school. My dad never said another word to me about the incident.

Fifty years later, I don’t even remember how it all got resolved. I guess I was allowed back in class, and besides, I was the kid of the boss. I assume Mrs. Muren didn’t want to press the issue with him over a silly little love note.

I kissed Patti Flynn a few more times that year, mostly after home basketball games. She eventually married Perry Martin, a classmate of mine in Mrs. Muren’s eighth grade class and witness to the whole note fiasco.

Me, I’d love to just sit and ask my dad if he remembers that story. What I wouldn’t give for that.