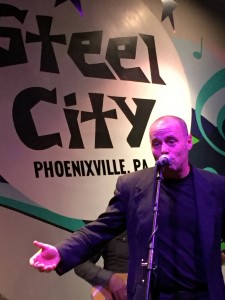 J.D Malone and The Experts debuted the song “Blue Impala” May 6, 2017, at Steel City in Phoenixville, PA.
(Photo by Mike Morsch)

Among the many cool things I get to do with The Vinyl Dialogues series during interviews with the artists is to hear the inspiration and evolution of some of my favorites songs.

Daryl Hall has shared with me the story of how he wrote “Sara Smile.” Dewey Bunnell of the band America has told me the backstory on “A Horse With No Name.” Tom Johnston of the Doobie Brothers has explained to me his thought process on the writing of “China Grove.” Elliot Lurie of Looking Glass offered me great detail on the creation of “Brandy.”

But I’ve never gotten to “live” the evolution a song myself. Until now.

J.D Malone is a singer-songwriter who performs often in my area of suburban Philadelphia. I’ve followed his career for a few years now, seen him perform live a number of times and have all his CDs. His songs are well-crafted and pleasing to the ear and he puts on a great high-energy show. Admittedly, and with substantial bias, I think he’s a big deal and I think the rest of the world should think he’s a big deal as well.

J.D wrote a song called “My Own Paradise,” which is off his last CD “Town and County.” Look it up, buy the CD and listen to the song. It’s brilliant.

And it inspired me to do something that I’ve never before been inspired to do: to write a song. I don’t write music, I write about music. There is a big difference.

But listening to the lyrics of the song made me contemplate my own paradise. What was it? And after listening to “My Own Paradise,” over and over, I determined that I’ve been fortunate to have had several of my own small paradises throughout my life: to be a son, to be a father, a husband, to have been a college baseball player, to be an author.

But I kept going back to one experience in my life when I was 17 years old. My dad had a 1975 blue Chevy Impala, and it was the first car that I learned to drive. It was also the one I drove on my first car date.

It was the fall of 1976, my senior year in high school, and I had a new girlfriend. She was gorgeous. Long brunette hair down to the middle of her back, long legs all the way up to her backside. She was book smart, but shy in public. Shy around everybody but me.

That blue Impala had a bench seat in the front, and one of the coolest things in those days was that when I picked her up for a date, she’d get in the passenger side,  slide across the seat and sit next to me while I drove. Windows rolled down, her hair brushing against my cheek, cassette tapes cranked up on the sound system, her left arm on my shoulder, her hand stroking the back of my neck. It was the exploration and discovery of young love and it was a glorious time to be 17.

Whew. So I wrote a song about that. (Note to wannabe songwriters: If you’re going to write your first song about a girl, make sure it’s about your wife and not an old girlfriend, even one from 40 years ago.)

The urge to write a song was driven by the inspiration of J.D’s song plus the memories of the blue Impala. It was an incredibly strong pull, one that I had not experienced before as a writer. I didn’t even look up “How To Write A Song” on the internet, I just emptied the ideas in my head onto a computer screen.

But I wanted to know: Was there any “there” there? Could it be a real song? So I showed the lyrics to a couple of close friends, Greg Batton, my best pal in high school and somebody who knows not only music but also the girl in the song; and Craig Peters, a great music guy who I knew would offer an honest opinion.

Both of them loved it, so I was encouraged to take it a step further. I reached out to another singer-songwriter friend, Dan May, a brilliant artist and another favorite of mine. He had written a song for me a few years ago about my first book, “Dancing in My Underwear,” and we have had several frank and entertaining conversations over the years about music and life. I knew he would give me a professional songwriter’s opinion.

Dan took the lyrics and tried to put music to them. And as talented as he is, he couldn’t come up with anything that fit with my lyrics. We had a nice conversation about it and he offered me a short course on songwriting over the phone.

But as it turned out, the inspiration of trying to write a song was the most powerful part of the experience, not the finished product itself. I had given it a shot, trying to catch lightening in a bottle, and had swung and missed. I was content to go back to writing about music.

Several weeks later, I was at a J.D show and during one of the breaks, I related the above story to him. There was still something gnawing at me that there might be a song somewhere in that car with that girl on that bench seat.

“Nah, I can’t do that. It’s an amateurish effort on my part,” I said. “But what I can do is write the story for you and then maybe you can see if there is a song in the story.” It had not occurred to me at the time to offer Dan the story instead of just the lyrics I had written.

So I sent the story to J.D the next day. And he responded immediately: “Love the story and absolutely there is a song there. I would love to come up with something if you like.”

Of course I said yes. It was J.D’s song that inspired me to try to write a song in the first place. If I couldn’t make it happen, maybe he could. I was excited at the possibilities.

And then I didn’t hear anything from J.D for weeks and weeks. I thought it might have been a dead deal.

Then at the end of March, I got a Facebook message from J.D: “Hey Mike, ‘Blue Impala’ is about finished! I’ve got a couple more lines to complete. It’s rockin’! I plan to have it in the set (at the May 6 show by J.D Malone and the Experts at Steel City in Phoenixville, PA). The band should be able to grab onto it quickly.”

Whoa. This had the potential to be off the charts cool. How was J.D going to interpret my story and how much of the story would make it into his song?

Of course, I was pretty excited the night of the show. We arrived at the venue and got to speak to J.D before the performance. I asked for permission to video the song, which he graciously granted. “Blue Impala” was to be the last song at the end of the band’s first set.

The songs in that first set were a bit of a blur for me. Unfortunately from my seat, when I was looking at J.D on stage, there was a clock right behind his head in my sightline on the back wall of the venue. I kept looking at that clock trying to figure how close we were getting to the end of the first set.

Then with a short introduction, in which J.D mentioned that he was debuting a new song that was inspired by a story that I had sent him, I heard “Blue Impala” for the first time.

And. It. Was. Simply. Awesome. (As an aside, The Blonde Accountant even liked the song. If your wife likes a song that’s about a girl other than her, that’s some pretty good songwriting right there. Thanks for keeping me out of that doghouse, J.D.)

It’s difficult, even for a word guy like me, to describe the excitement I experienced at hearing the song for the first time. It was almost as exciting as sitting on the bench seat in that blue Impala with that girl 40 years ago.

Unfortunately, in all the excitement, I botched the video. I got only the last verse and end of the song. J.D sent me a copy of the lyrics the next day and I was able to see how much of the story ended up in the song’s lyrics.

J.D shared with me that he plans to record the song and put it on his next album. How cool is that?

And the girl? Well, we stayed together for two years, through our first year in college. We split up in the summer of 1978 and I haven’t had any contact with her since. I hope life has been kind to her.

My dad is gone, too. And so is the blue Impala. But for a few minutes Saturday night, I got to be 17 again and relive the memories of being in that front seat of my daddy’s car.

That car. That girl. That era. This song, which beautifully captures that moment in time and preserves it forever.

Thanks for that special gift, J.D.