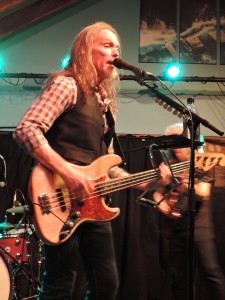 Timothy B. Schmit, bassist for the Eagles and Poco, performed a solo show May 11, 2017, at Havana in New Hope, PA.
(Photo by Mike Morsch)

In a conversation with Timothy B. Schmit for an advance story on his solo show May 11 at Havana in New Hope, Pennsylvania, we talked about what it was like to play in different-sized venues.

Schmit, the bassist for Poco and more famously, the Eagles, said he likes playing in all sizes of venues, big and small. But he did point to the obvious difference of the intimacy of a smaller venue as compared to a stadium concert.

“It’s almost easier in some ways to play for thousands and thousands of people than it is to play at a smaller place,” said Schmit. “When I play my show in these smaller places . . . it’s almost like you’re in someone’s living room. It can be a little intimidating. Sometimes people are sitting right at my feet. They’re very close.”

Well, now I know firsthand what’s he talking about. For the Havana show, I got to sit right at the feet of Timothy B. Schmit. Literally. Right in the front row in a seat reserved for media. And no surprise here, it was indeed like being in someone’s living room. If I was any closer I would have been in the band.

It’s only the second time I’ve ever had the opportunity to sit in the front row of a show. The first was many years ago at the Keswick Theatre in Glenside, Pennsylvania, at an oldies show that featured Jay Siegel’s Tokens. The Tokens were a doo-wop vocal group that had the chart-topping hit “The Lion Sleeps Tonight” in 1961. 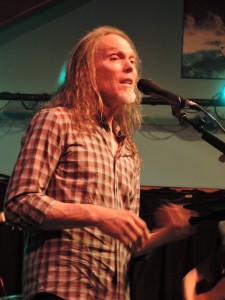 My seat for that show was in the first row, stage right, directly in front of several large monitors. When Siegel went into those high falsetto portions of “The Lion Sleeps Tonight,” he nearly blasted me into the sixth row.

Nothing like that happened at Schmit’s show. But like most shows I attend, there were a few personal “moments,” great little takeaways that make for an enjoyable and memorable concert experience.

One for me happened in the middle of the show, when the band left the stage leaving just Schmit and his acoustic guitar. “I want to do this song for Glenn,” he said, a reference to the late Glenn Frey of the Eagles. “I sang backup on this song.”

Schmit then went into a stripped-down acoustic version of “Peaceful Easy Feeling,” a song written by Jack Tempchin on which Frey sang the lead in the original 1972 Eagles version. The song made it to No. 20 on the U.S. Billboard Easy Listening chart and No. 22 on the U.S. Billboard Hot 100 singles chart. I would have thought it had charted higher.

But people of a certain age know all the words to that song, and with Schmit – whose beautiful voice is still strong – singing lead vocals, the audience at Havana was able to provide a choir of backing vocals. While sing-a-longs can get unruly if the audience drowns out the lead vocalist, this version of “Peaceful Easy Feeling” provided a peaceful easy vibe that made a memorable concert moment for me. We collectively sounded pretty good backing Schmit on that song. 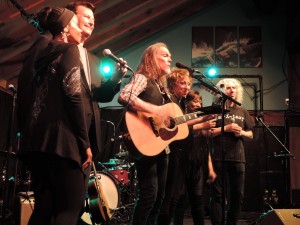 Schmit’s set included some of his solo work, some songs from his time with Poco and a couple of new songs off his latest album, “Leap of Faith,” all of which were very good. His tight band and three female backing vocalists were superb all evening, and I particularly enjoyed the spirited performance of “White Boy From Sacramento” off Schmit’s (who is originally from Sacramento, California) 2009 solo album “Expando.”

But it was the three Eagles songs that stood out for me amid a really strong set list. In addition to “Peaceful Easy Feeling,” Schmit did his two signature Eagles songs, “I Can’t Tell You Why,” which he co-wrote with Frey and Don Henley and on which he sings lead. That song appeared on the band’s 1979 album “The Long Run” and made it to No. 3 on the U.S. Billboard Adult Contemporary chart and No. 8 on the U.S. Billboard Hot 100 singles chart; and the final song of the evening, “Love Will Keep Us Alive,” on which Schmit sings lead.

(An interesting bit of Eagles trivia about “Love Will Keep Us Alive.” It appeared on the 1994 reunion “Hell Freezes Over” album but was never formally released as a single in the U.S. and thus not eligible to appear on the Billboard Hot 100 singles list according to the rules at the time. The song did, however, spend three weeks in the No. 1 spot on the Billboard Adult Contemporary chart in 1995.)

I would be remiss if I didn’t convey my love for Havana. The venue is a cool place to watch a show. Its intimacy is among it’s charms. The Schmit show was a sellout, which packed approximately 300 people to the rafters. The food is always superb as is the service. Dave Maida – national recording talent buyer, promoter and Havana’s manager – and the staff are first-class professionals. You should go there for dinner and a show. New Hope is a hip place to hang.

Timothy B. Schmit might not be able to tell you why. But I can. It was the right show in the right venue on the right night. And it doesn’t get any better than that.