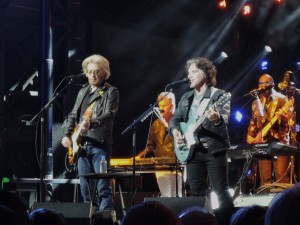 Daryl Hall and John Oates headlined the inaugural Hoagie Nation Festival May 27, 2017, in their hometown of Philadelphia.
(Photo by Mike Morsch)

Seeing Daryl Hall and John Oates headline the inaugural Hoagie Nation Festival in Philly May 27 reminded me of a portion of the last interview I did with Oates. It was about how each of their roles in the band had evolved throughout their careers.

In a dozen interviews over the past decade, I’ve talked to Oates about almost everything Hall & Oates and everything solo Oates. He’s what I’d describe as the perfect interview subject: articulate, has a detailed recollection about songs and events, is a good storyteller, never dodges a question, polite, gracious, media savvy and a genuinely nice guy. He’s the kind of guy you’d want to hang with and just listen to him tell stories. I consider myself lucky to have had him share many of those stories with me and I’ve included them in three volumes of The Vinyl Dialogues. (He’s also got a book out titled “Change of Seasons” which includes many more of those great stories.) 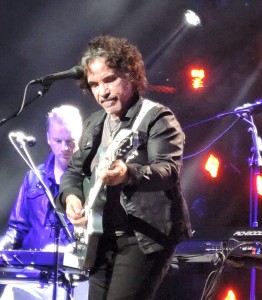 But the one subject I’d never broached with Oates – because I wasn’t quite sure how he felt about it and didn’t want to offend – was this “second banana” hooey. How did that perspective happen? Did it bother him?

In one interview I had with Daryl Hall, he had briefly mentioned that when the band started to hit really big in the early 1980s, “our roles within the band changed.” He didn’t elaborate and I didn’t pursue any further line of questioning. But in my interviews with both Hall and Oates, neither has shown anything but the utmost respect for the other.

So during my last interview with Oates, I felt comfortable enough – thanks in large part to him seemingly being comfortable with me and my questions over the years – to ask him about how his role in the band had evolved and if any of the second banana perspective had bothered him.

The short answer: It doesn’t.

What is comes down to was that many of the duo’s commercially successful songs – “Sara Smile,” “Rich Girl,” “Wait for Me,” “Kiss on My List,” “You Make My Dreams,” “Private Eyes,” “Maneater,” “One on One” – all feature Hall on the lead vocals. 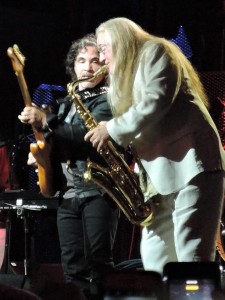 “It happened naturally,” said Oates. “In the very beginning, it was a much more equitable thing between Daryl and I in terms of who was singing lead. There were a few singles in the early days that were released with me singing lead that never caught on.” (If you want a couple of examples of H&O songs that should have been bigger hits with Oates singing lead, look no further than the “Abandoned Luncheonette” album and the Oates-penned songs “Had I Known You Better Then” and “Las Vegas Turnaround,” the latter of which they still play in many of their live shows to this day, although it wasn’t included Saturday night in the Hoagie Nation Festival setlist.)

It’s all about lack of ego, according to Oates.

“At that point, if I was ruled by ego, I might have said, ‘OK, I don’t want to be involved in something like this’ and I would have left,” said Oates. “But I always accepted that Daryl was such an exceptional singer and such a unique talent that it didn’t really surprise me, to be honest with you, when his voice cut the way it cut through the radio. It has a quality. It’s a natural gift that he happens to have that I evidently don’t. So be it.”

Oates said that he then became more involved in some of what he called “things that aren’t so flashy and glamorous that people don’t see” with the band. Things like the studio production, onstage lighting, sound staging and some of the other technical aspects of putting on live shows. 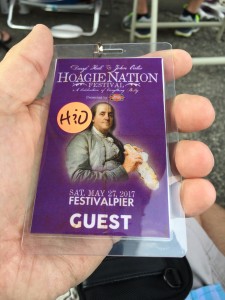 “I always viewed a partnership as a partnership. In any partnership, I don’t care if it’s marriage or a work partnership, you have to compromise on a lot of levels. So I’ve just accepted that. It was OK with me,” said Oates. “To be honest, I don’t need that in my life, that reaffirmation from the public. That doesn’t matter that much to me. So I guess in a way, it was really lucky that Daryl found me.”

Just to provide context, that last line was said by Oates with tongue firmly planted in cheek and with a chuckle.

But there isn’t any question – at least in my mind – that even though both Hall and Oates have pursued their solo projects over the past several years, they still like performing together. And that was evident at the Hoagie Nation Festival in their hometown.

“That’s the thing about Daryl and I that people really don’t understand or realize – that we are very unique people. We’ve grown up together from the time we were 18 years old. We’ve accepted each other’s idiosyncrasies, neuroses, good points and bad points. We don’t air dirty laundry and we learned how to deal with each other and how to make it work so that each of us feels satisfied and wants to continue doing it. It’s a very complex and subtle thing that is almost impossible to describe,” said Oates.

“The point is, we’ve really been sensitive to each other. We kind of inherently know what each person needs to keep this thing going and that’s why we’re still together.”