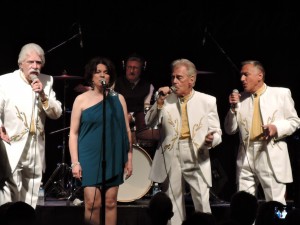 Joe Rock, a young record promoter, was bit out of sorts. His girlfriend, a secretary at a radio station that Joe was promoting, had just dumped him.

A few nights later, Joe got into his car to take a ride, but he couldn’t get the girl out of his mind. Every time he got caught at a stoplight, he’d jot down a song lyric on a notepad he kept in the car.

It was 1958, and Rock had just formed the Skyliners, a doo wop group out of Pittsburgh, whose lead singer was an 18-year-old Jimmy Beaumont. Rock, who managed the group, took the lyrics to the song he wrote in the car to Beaumont, who then wrote the music for it the next night.

When it came time to record the song, an a cappella demo of it was done on a tape recorder. Thinking that the tape recorder was turned off, the female singer of the Skyliners, Janet Vogel, continued to vocally riff at the end of the song, ending in a high C after repeating 13 “yous,” simply as a joke.

But the group like the song – and the ending by Vogel – so much that the members decided to keep it in the arrangement.

“We were set to end it, but we didn’t know just how we were going to end it,” said Beaumont. “We were going to fade it out, actually. A lot of the songs of that day used the fade-out ending. And when Janet added her part at the end and hit that high note, we thought we really had something then.”

More than a dozen record labels, though, didn’t like the song and rejected it, until it was finally released by a local Pittsburgh label, Calico Records. 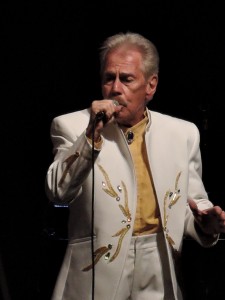 According to the group’s 40th Anniversary Edition CD insert written by Ed Salamon, Dick Clark was an early believer of the Skyliners and featured the group on American Bandstand on Feb. 13, 1959. By March of that year, the song – “Since I Don’t Have You” – had spread from Pittsburgh to the national pop charts and the Skyliners had a huge hit. It reached No. 12 on the U.S. Billboard Hot 100, No. 7 on the U.S. Cash Box Top 100 chart and No. 6 on the U.S. Billboard Adult Contemporary chart.

The song is considered by many as one of the quintessential ballads from the 1950s.

Nearly 58 years later, I got to hear Jimmy Beaumont and the Skyliners sing that classic tune “Since I Don’t Have You” live for the first time, courtesy of oldest daughter Kiley, who got tickets to the show at the Sellersville Theatre 1894 in Sellersville, Pennsylvania, as a Father’s Day gift.

Beaumont is the only original member left of the Skyliners, which now includes Nick Pociask, Donna Groom and Frank Czuri. It’s a talented group of singers and performers – backed by a seven-piece orchestra led by drummer Mark Groom, Donna’s husband.

The group, which boasts four lead singers and shares the heavy vocal lifting equally throughout the course of the show, sang the hits from its catalog, including “This I Swear” and “Pennies from Heaven,” as well as some great covers. There’s no mistaking the classic lead vocals of the group’s original singer Beaumont, but I also enjoyed the leads by Groom, Pociask and Czuri. They’re highly skilled professionals and entertaining performers. 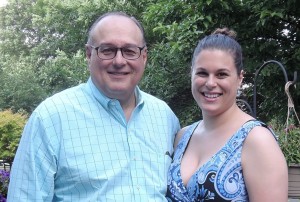 Dad and daughter making another special Father’s Day memory, with a big assist from Jimmy Beaumont and the Skyliners.

I particularly enjoyed the cover of B.W. Stevenson’s “My Maria,” on which Pociask handled the high falsetto lead vocals. It reminded me of another pleasant memory from the 1970s, when I was a sophomore in high school in central Illinois.

Our student council had secured a juke box for our common area an every day after lunch in 1975, I would pop a quarter into that jukebox and play the same two songs: “China Grove” by the Doobie Brothers and “My Maria” by B.W. Stevenson. “My Maria” reached No. 9 on the Billboard Hot 100 singles chart in 1973. More than two decades later, Brooks & Dunn covered the song and it reached No. 1 on the country charts in mid-1996.

And as much as I loved the show and the music, it was that much sweeter because I got to experience it with my baby girl on Father’s Day. A little doo wop and some treasured daddy and daughter time. It just doesn’t get any better than that.

Who knew that Joe Rock’s girlfriend would make a decision nearly 60 years ago that would result in such a special Father’s Day for me? Thanks Joe Rock’s ex-girlfriend, whoever you are.

And thanks to Jimmy Beaumont and the Skyliners for providing a great soundtrack for that memory. Just like they’ve been doing since 1958.

Jimmy Beaumont and the SkylinersSellersville Theatre 1894