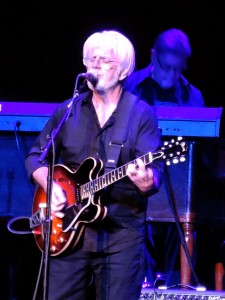 Michael McDonald closed his show Saturday night at the Tropicana in Atlantic City with “Takin’ It to the Streets,” which made sense.

The song, from a 1976 Doobie Brothers album by the same name, was the first single written by McDonald released from the first album on which he appeared as a member of the Doobie Brothers. The song made it to No. 13 on the U.S. Billboard Pop Singles chart. It’s a great tune and likely holds a special spot for McDonald among his vast library of songs.

McDonald had replaced Tom Johnston, who was sidelined in 1975 with health issues, in the Doobie Brothers, and “Takin’ It to the Streets” – both the song and album itself – was a signal that the band was going in a completely different direction.

The intro to “Takin’ It to the Streets” came to McDonald in his car while driving through Southern California on his way to a gig.

“I just heard that intro in my head and I knew that it had something to do with a gospel kind of feeling track. I couldn’t wait to get to the gig so I could figure out on piano what it was,” said McDonald in a interview in advance of the Atlantic City show. “I set up my piano as fast as I could, plugged everything in and sat there for a moment, looking for the chord that I was hearing my head. I just picked at it long to enough to where the guitar player looked over at me and said, ‘Hey, we gotta start.’ I was lost in looking for this elusive melodic rhythmic thing.”

According to McDonald, the basic song was written in those couple of minutes. He would fine tune it after the gig when he got back to his apartment later that night.

“The rest of the song was pretty simple. It was just trying to figure out what that intro meant and where it was going musically,” he said. “It seemed like kind of a natural social subject at the time because it felt like gospel music and gospel music always has a message. I had been talking to my sister, who was in college at the time, and she was in a social economics class or something. She was a typical college student and thought the weight of the world’s problems were solvable by those as smart as college students. We talked about how in the inner city, the bottom was dropping out for people and they were falling through the cracks. It seemed like it was a natural marriage of ideas and melody.”

The Atlantic City show saw McDonald mix some old with some new. Casino shows are generally short, in the neighborhood of 75 minutes plus an encore. I’ve been told by several artists that’s because the casinos want people back out into the gambling areas spending money rather than sitting in the theater for two or two and a half hours.

I’ve got no beef with that. Everybody – the artists, the venue, the fans – have their own best interests at heart. But in this instance, that may have worked against McDonald a bit.

His set included a handful of songs from his new album, “Wide Open,” which is due out in September. In a short set, though, that may have rubbed some of the diehard Doobie Brothers fans the wrong way. In a totally unscientific poll from a portion of the crowd sitting within earshot, it appeared some of them would have preferred more Doobie Brothers-era material from McDonald.

In fact, McDonald closed the main part of the show with “What A Fool Believes” – a personal Doobie Brothers favorite – after which a portion of crowd left, missing the entire encore and the spirited version of “Takin’ It to the Streets.”

None of that bothered me, though, because this was the first time I had seen McDonald perform live and I wasn’t going anywhere, including out to the slot machines. I like the Tom Johnston Doobie Brothers, I like the Michael McDonald Doobie Brothers and I like the McDonald solo stuff. From what I heard in the new songs, I’ll buy the album when it comes out. 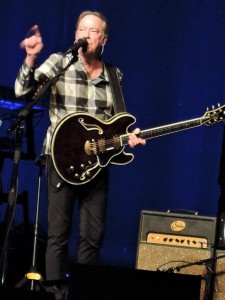 Also on the bill with McDonald for this show was Boz Scaggs. And although they didn’t actually perform any songs together during the evening, it’s not breaking news that a show featuring Boz Scaggs and Michael McDonald is going to be a great evening of music. How can it not be?

It’s the second time I’ve seen Scaggs in concert, and he didn’t disappoint. He tends to lean toward more bluesy stuff in his live performances, but he’s well aware that those of us of a certain age are there to hear the hits, particularly from his 1976 album “Silk Degrees,” like “Lowdown” and “Lido Shuffle.”

My personal favorite during the set though was a brilliant version of “Georgia,” also from the “Silk Degrees” album but not one of the four songs released as singles (the other two being “What Can I Say” and “It’s Over”) that charted.

One last note from this show. You’ll notice that I included a photo of McDonald playing the guitar with this piece. McDonald is a piano player by trade, and I would have preferred to use a photo of him at the piano. I use a little point-and-shoot camera with a telephoto lens at concerts that allow non-flash photography. It usually serves its purpose from the vantage point of my seat.

But the camera does struggle with concert lighting at times, and the way McDonald was lit while at the piano located at stage left made those photographs washed out and unusable. When McDonald moved away from the piano for a few songs at the center stage mic, the angle and lighting were a bit better. So what you see is the best shot I could get.

Still, that didn’t take away from an enjoyable evening of music by two of my favorite artists.