Frank Jeckell, co-founder of the 1910 Fruitgum Company and the only original member still performing in the band, plays lead guitar at the Sixties Spectacular concert April 29, 2017, at the State Theatre in New Brunswick, N.J.
(Photo by Mike Morsch)

The 1910 Fruitgum Company opened the Sixties Spectacular show Saturday night in New Brunswick, New Jersey, with the song “Yummy, Yummy, Yummy,” which reached No. 4 on the U.S. Billboard Hot 100 pop singles chart in June 1968. It is considered among the first handful of songs that we now identify as the beginning of “bubblegum pop.”

And for a long time, a lot of people have believed that “Yummy, Yummy, Yummy” is a 1910 Fruitgum Company song.

The song was first recorded by the Ohio Express in 1968. The band itself included various studio musicians and was something that was cooked up by Jerry Kasenetz and Jeffrey Katz, executives for Super K Productions, a recording company under the Buddha Records umbrella. Who is the “real” Ohio Express is has been a difficult question to answer over the years because Kasenetz and Katz used “Ohio Express” as sort of a marketing brand name for Super K Productions.

What is known is that the original lead singer for the Ohio Express on “Yummy, Yummy, Yummy” is Joey Levine, who ended up singing lead vocals on other Top 40 singles from the 1960s, including “Run, Run, Run” by The Third Rail in 1966. Levine was also a producer for Super K. Productions.

“Joey Levine never appeared on any Fruitgum records, never wrote a Fruitgum record, was never even in the studio when a Fruitgum record was recorded,” said Frank Jeckell, co-founder of the 1910 Fruitgum Company and the only remaining original member performing today under the band’s banner.

“I don’t know why, but when people meet us for the first time and hear the name 1910 Fruitgum Company, they say, ‘Oh yeah, right, “Yummy, Yummy, Yummy.”’ That’s the response we get,” said Jeckell. “And for a while, we would correct people and say, ‘No, that was the Ohio Express.’ But then there is a reality here.”

That reality is that the studio and the 1910 Fruitgum Company itself combined to complicate the matter. The second album that the band recorded for Super K Productions, titled “1, 2, 3 Red Light” released in October 1968, included the track “Yummy, Yummy, Yummy,” with co-writing credits for Levine and Artie Resnick.

“If you look on the ‘1, 2, 3 Red Light’ album, you will hear the Ohio Express track, which by the way wasn’t recorded by the Ohio Express, it was recorded by the studio musicians for ‘Yummy, Yummy, Yummy,’ with our lead vocalist Mark Gutkowski singing it,” said Jeckell. “So the fact is, there is a bonafide real version of ‘Yummy, Yummy, Yummy’ by the 1910 Fruitgum Company. It wasn’t the one that was the hit record, but it does exist. So we stopped correcting people and we even include the song in our show. People want to think that, fine, we’ll take it.” 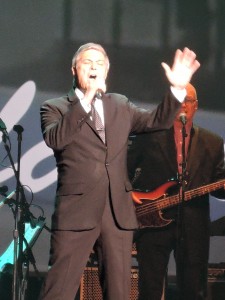 Along with the 1910 Fruitgum Company, the Sixties Spectacular show in New Brunswick also included spirited and enjoyable performances by Dennis Tufano, original lead singer of the Buckinghams; and Peter Noone, original lead singer of Herman’s Hermits. Albums by the 1910 Fruitgum Company, the Buckinghams and Hermans Hermits will be featured in “The Vinyl Dialogues Volume IV: From Studio to Stylus,” which will be out this summer.

The fourth act on the bill for the Sixties Spectacular was B.J. Thomas, who was featured in “The Vinyl Dialogues Volume II: Dropping the Needle.” I interviewed Thomas about his 1972 album “Billy Joe Thomas,” which included the hit single “Rock and Roll Lullaby.” The song, written by Barry Mann and Cynthia Weil, made it to No. 1 on the U.S. Billboard Adult Contemporary chart.

But there has been a myth surrounding “Rock and Roll Lullaby” that the background vocals for the song were done by the Beach Boys.

They weren’t, according to Thomas, which he confirmed in our conversation.

But it was indeed the intent of Steve Tyrell, the album’s producer, to get the Beach Boys to sing backup on “Rock and Roll Lullaby.” As detailed in the chapter, Beach Boys co-founder Brian Wilson had agreed in a telephone call with Tyrell that the Beach Boys would sing backing vocals on the song. But a deal couldn’t be reached. 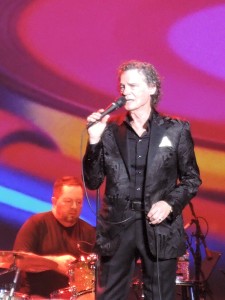 B.J. Thomas sings one of his hits at the Sixties Spectacular show.
(Photo by Mike Morsch)

Undeterred, Tyrell decided that if he couldn’t get the Beach Boys, he was going to get as close to the Beach Boys sound on the backing vocals of “Rock and Roll Lullaby” as he could.

He secured the services of David Somerville, lead singer of the Diamonds, whose falsetto voice can be heard on the group’s 1957 hit “Little Darlin.’” Next he hired Darlene Love, Fanita James and Jean King of the all-girl group, the Blossoms, who provided backing vocals for many big hits in the 1960s produced by Phil Spector. And Tyrell rounded it out by adding Gene Morford, Ron Hicklin and Tom Bahler, three guys who had worked as studio background vocalists on several Jan and Dean songs and who sounded a lot like the Beach Boys.

So that’s not the Beach Boys backing Thomas on “Rock and Roll Lullaby,” but it does sound a whole lot like them. With all due respect to Thomas, what was created in the studio for “Rock and Roll Lullaby” in 1972 can’t really be duplicated on stage today. But Thomas’ version of the song Saturday night was among my personal highlights. 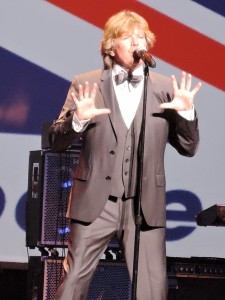 A few more words about the Sixties Spectacular show: If that’s your era of music, it was a really good show. Promoter Jim Anderson, who does two of these type of shows a year at the State Theatre in New Brunswick, does a great job of hiring the acts that compliment each other and make for a highly enjoyable evening of entertainment.

I was fortunate to meet Frank Jeckell of the 1910 Fruitgum Company and Dennis Tufano of the Buckinghams before the show and both were gracious and pleasant. I appreciated the opportunity to interview and meet them. I particularly relate to Tufano and the Buckinghams, a Chicago group, because I grew up just a few hours south of Chicago and as a kid used to listen to WLS radio, the station that helped promote the Buckinghams early in the band’s career.

And finally, Peter Noone is amazing. He’s 69 years old now (I had to look it up), but he doesn’t seem to have aged a bit since he started at age 15 with Herman’s Hermits in the mid-1960s. He’s got the face of a 35-year-old and the energy of a 20-year-old. I got tired just watching him move around the stage.