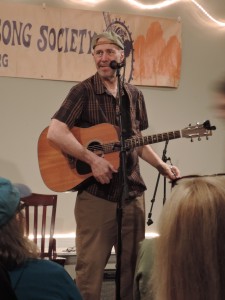 There was a moment during the John Hall solo show on Earth Day at the Philadelphia Folksong Society April 22 where I just had to say something.

Hall, co-founder of the band Orleans, former congressman from New York and longtime environmental activist, had gone through his set and was closing the show. He had mixed generous amounts of storytelling into the set, including stories about the songs themselves as well as his experiences on Capitol Hill in Washington, D.C.

But we were to the encore and I still hadn’t heard the one other song that I came to experience. So I suggested loudly enough for him to hear – the intimate new home of the Philadelphia Folksong Society in Roxborough, Pennsylvania, didn’t require me to shout – “Dancing in the Moonlight.”

“Dancing in the Moonlight” is not an Orleans or John Hall song. But it has a connection to both. 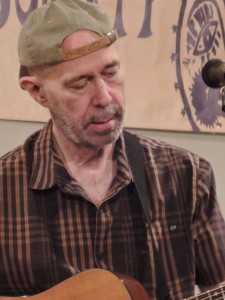 The song was written by Sherman Kelly and recorded by the band King Harvest in 1972. It got to No. 10 on the U.S. Cash Box Top 100 chart and No. 13 on the U.S. Billboard Hot 100 singles chart. Sherman Kelly’s brother, the late Wells Kelly, joined the first incarnation of King Harvest but then left to become the original drummer of Orleans at about the same time “Dancing in the Moonlight” hit the charts.

The song was covered by Orleans in its early days and has been a part of its live shows for decades. From a personally selfish standpoint, “Dancing in the Moonlight” has always been one of my favorite songs and I wanted to hear John Hall cover it Saturday night. It was well within the Seven Degrees of Separation from King Harvest.

Which he did. And we all joined in because we all knew the lyrics. It was the highlight of the evening for me.

Although it was the first time I had seen Hall perform live, I have interviewed him. He and his first wife, Johanna Hall, co-wrote “Still the One,” which appeared on the 1976 Orleans album “Waking and Dreaming.” Interviews with both John and Johanna about that album appear in the first volume of The Vinyl Dialogues. The chapter includes the back story on “Still the One” as well as the story about the album’s cover, which Johanna described in the chapter as “acknowledged to be among the worst album covers of all time.” 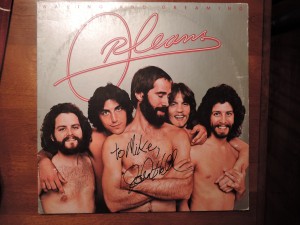 Of course, “Waking and Dreaming” was the album that I had brought along with me in the hopes of getting Hall to sign it, which he graciously did after the show.

It was a fun evening of music, storytelling and support for the artists and the Philadelphia Folksong Society, which sponsors the annual Philadelphia Folk Festival, the longest-running music festival in the United States. This year’s festival, scheduled for Aug. 17-20, will be the 56th annual event. You can get the details at www.pfs.org.

Opening the show was Philadelphia singer-songwriter Lizanne Knott, who did a much-too-short set of only six songs. I’m a longtime fan of Lizanne’s beautiful lyrics and melodies and have followed her around the greater Philadelphia region for years. You should check her out at www.lizanneknott.com. 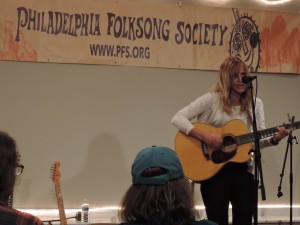