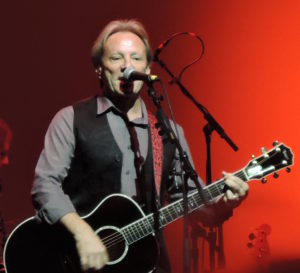 Dewey Bunnell of the band America wrote and sang lead on the song “A Horse With No Name.”
(Photo by Mike Morsch)

There’s a sign that makes the rounds on Facebook that frequently gets posted to my timeline. It reads: “All I’m saying is, at any point during that ride through the desert, he could have given that horse a name.”

The reference is, of course, to the song “A Horse With No Name” by the band America. My friends know I am a longtime fan of the band, so that’s why this sign is frequently posted on my Facebook page.

It turns out, though, that I have a little insight on this, thanks to the guy who wrote it.

The song was written by Dewey Bunnell, who along with Gerry Beckley and Dan Peek, founded the band America in 1970. Its self-titled debut album, released in 1971, didn’t initially contain the song. But after “A Horse With No Name,” which featured Bunnell on lead vocals as well, became a hit and went all the way to No. 1 on the U.S. Billboard Hot 100 chart, the “America” album was re-released in 1972 with the track.

But the controversy surrounding the song wasn’t that the horse didn’t have a name, it was that some radio stations refused to play it because of its supposed references to heroin use. “Horse” is a slang term for heroin.

And straight from the horse’s mouth, you might say, Bunnell has told me that “A Horse With No Name” is not about drugs.

“Not at all. It actually has changed a little bit in my mind as the decades have gone by,” said Bunnell in the 2006 interview.

“The central theme [of the song] was ‘solitary thinking in a peaceful place.’ The horse was really just a vehicle to get out there. I always loved the desert as a kid. ‘The heat was hot’ was an important feeling that I was trying to re-create there. [The song] was just a travelogue with an environmental message in there about saving the planet,” said Bunnell.

Bunnell said that when the band shot the cover for its third album “Hat Trick,” which was released in 1973, the photo shoot did include horses and band members did go out into the desert for a couple days to get some shots.

“We had fun, but I don’t recall the name of the horse I rode while I was out there,” said Bunnell. “A lot of horse people think I have a real working knowledge of the animal, but I don’t.”

So there you have it. Even when Dewey Bunnell had the chance to actually ride a horse in the desert, he still didn’t give it a name.

Next time I talk to Dewey, I’ll have to ask him flat out if in subsequent years, he’s ever thought if that horse he wrote about has a name.