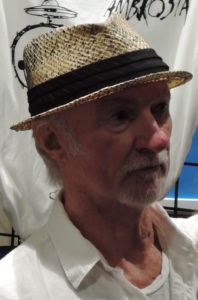 The next time I see Robbie Dupree, I’m going to have to apologize to him. You see, I may have been a little overly aggressive in our initial meeting.

Dupree is part of this year’s Rock the Yacht 2015 tour. Joining him on the show is Stephen Bishop, Player, Ambrosia and Little River Band.

I had the opportunity to see the first concert of the tour recently at the Mayo Performing Arts Center in Morristown, N.J. My friend Patti Myers, who serves as official webmistress for Player, hooked me up with a ticket and backstage access. An interview with Player’s Peter Beckett talking about the making of the band’s 1977 self-titled debut album appeared in The Vinyl Dialogues.

The night of the show, Patti was taking a friend of hers and me backstage to meet Beckett and Ronn Moss of Player. We went up on stage through a side door, out another door at the back of the stage and into a foyer behind the stage. It was about 20 minutes before curtain.

Standing there in the foyer was Robbie Dupree. I didn’t immediately recognize him.

“Hi Robbie!” said Patti as she gave him a hug, then proceeded to introduce us to the singer. 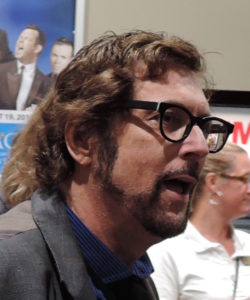 He extended his hand to me and I shook it. I didn’t realize it at the time, but maybe I was a little more enthusiastic than I would normally be at meeting an artist whose music I enjoyed.

Oops. Sorry Robbie. I didn’t mean to squeeze the bejeezus out of the man’s hand. I really didn’t. And I felt like a mope.

In was a brief exchange, however, and it appeared to me that no paramedics had been immediately summoned to attend to Robbie as we took our leave. We proceeded down some steps and to the Player dressing room, where both Beckett and Moss were getting ready for the show. I got to meet both of them, and they each had firm handshakes of their own. It was all I could do to not blurt out, “Don’t use that handshake on Robbie Dupree!” to Beckett and Moss.

The concert itself was spectacular. Dupree opened the show and appeared onstage without his hand bandaged, a sign I took to mean that I hadn’t actually broken the man’s hand. Whew. He sang two of his biggest hits, “Steal Away” and “Hot Rod Hearts” off his 1980 self-titled debut album. 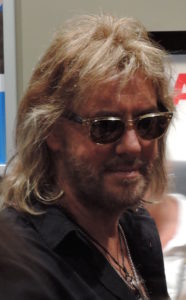 Next up was Stephen Bishop, who sang his hits “On and On” and “It Might Be You.” Bishop, you might recall, had a cameo role in the 1978 film, National Lampoon’s Animal House. He is billed as “Charming Guy With Guitar,” who is sitting on the steps of the Delta frat house singing and playing for a bunch of young women when John Belushi’s character “Bluto” walks down the steps, pauses, then grabs Charming Guy’s guitar and smashes it against the wall.

Bishop was just as charming when he got on stage and was a real hit with the crowd that evening, despite the less than stellar endorsement of his singing and guitar-playing skills by Belushi’s character.

Beckett and Moss were up next, and they killed it. Their hit single “Baby Come Back” sounds just as good today as it did in 1977. Plus, those guys are just cool rock stars.

Ambrosia, who served as the house band for the first three acts, was up next. They still have original members Joe Puerta on bass and vocals; Burleigh Drummond on drums and vocals; and Christopher North on keyboards and vocals. And these guys still got it. They

were tight and their vocals were spot on. It was great to hear them live on the band’s hits “How Much I Feel” and “Biggest Part of Me.”

Little River Band was the final group. One of my first handful of concerts I saw as a youngster in the 1970s was in Ames, Iowa, in 1978 and featured Little River Band, Head East and Foreigner. The current lineup of Little River Band features no original members, which was the only disappointment for me. Otherwise, the band’s sound and performance was excellent.

The Rock the Yacht 2015 show is a fun one, and I recommend it if it comes to your town.

And if you go and have a chance to meet Robbie Dupree, try not to break his hand. I wish someone would have given me that advice ahead of time. 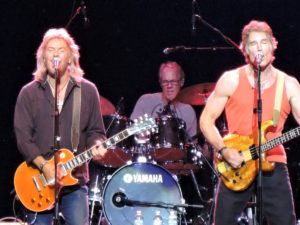