Harry Wayne Casey – a.k.a. KC of KC and The Sunshine Band – belts out one of his classic dance tunes Aug. 8, 2015, at the Tropicana in Atlantic City.
(Photo by Mike Morsch)

Once tickets had been secured for the KC and The Sunshine Band show Aug. 8 at the Tropicana in Atlantic City, it occurred to me that I maybe hadn’t put enough thought into the specifics of attending the concert.

In the days leading up to the show, one question loomed large: At this age, could I actually shake my booty for an entire KC concert without pulling a hamstring, throwing out my back or asking a paramedic to sit in the seat next to me with a defibrillator at the ready?

At the height of its popularity in the 1970s, KC and The Sunshine Band was all about dance music. No surprise there for those of us who grew up listing to it. The opening lines to one of the band’s biggest hits are, “Everybody, get on the floor, let’s dance. Don’t fight your feelings, give yourself a chance. Oh shake shake shake, shake shake shake. Shake your booty, shake your booty.” 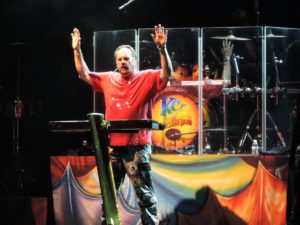 KC played to an enthusiastic crowd of booty shakers at the Tropicana gig.
(Photo by Mike Morsch)

In the middle of Iowa in 1977, there wasn’t much to do other than dance. (For the purposes of this discussion, tractor pulls don’t count because those were sanctioned events that involved competition and judging.)

So KC and The Sunshine Band was right in my wheelhouse in Iowa in 1977. There was a disco only a few blocks from the dorms. I can neither confirm nor deny that alcohol was involved at the time. But I can say this: If I could recall any of my disco shenanigans, I’m certain they’d be among the fondest memories from my first year of college. (Do a little dance, drink a little beer, throw up tonight, throw up tonight baby.)

But that was nearly 40 years ago. Fortunately, Harry Wayne Casey – a.k.a. KC – realizes that some time has passed. Now that’s not to say that KC’s crowds these days are too old to dance. Quite the contrary. It’s just that we all seem to know our limitations.

KC is now 64 years old, a fact that he revealed during the Tropicana show. “For the young people in the audience, think of it like this: I’m your mom’s NSYNC,” he said, to hoots and hollers from the faithful. “This is what Justin Timberlake is going to look like in 30 years.”

From the curtain, it was apparent we were going to dance, because the first song was “Shake Your Booty.” That sets the tone for a KC and The Sunshine Band concert these days, much like it did back in the day. And I know this because KC himself told me as much.

It was the second time I had interviewed KC. In the first interview a few years ago, he detailed the making of the band’s second studio album, the 1975 self-titled “KC and The Sunshine Band” for The Vinyl Dialogues. A portion of the most recent interview included KC’s recollections about the making of the group’s 1976 album, “Part 3,” which I hope to include in Volume III of The Vinyl Dialogues series next year.

But the great thing about a KC and The Sunshine Band show now is that although both KC and the audience members are going to do a lot of dancing, it won’t be constant. Neither the star nor the majority of the fans are 21 years old anymore. To help alleviate that, KC has hired some great females dancers for us to watch as we plop our tired booties back into the theater seats for a bit of a rest.

KC also used three costume changes during the evening. And to give the booty shakers even more time to re-energize, he mixed in a few ballads (but only a few) and told a story or two between some songs. It was a perfect pace set by an experienced performer. We danced . . . a lot. But we also had a couple of well-placed timeouts.

It was the first time I had seen KC and The Sunshine Band live, and it was my wife’s idea. We saw KC perform on TV at the Fourth of July celebration this year in Washington, D.C. She mentioned then that it was a concert she would like to see. As a KC fan, certainly I was in complete agreement, despite the fact that she is a product of the 1980s, so her booty is a bit younger than mine and more capable of being able to shake shake shake for an entire concert.

KC has still got it. He has a much fun as the audience at his shows. An entertainer, a performer, a singer, a songwriter, the Boogie Man keeps it real as well. When his voice didn’t perform like he wanted it to at the beginning of “Please Don’t Go” – the band’s fifth No. 1 single that was released in 1979 – he acknowledged after its conclusion that the song got off to “a rough start.” To me, admitting to being human is an endearing quality for a performer.

And those classic dance songs, well, there’s no question in my mind that they’ve transcended the generations and stood the test of time.

If you don’t believe that, then you’d better check your pulse. You may be beyond the help of any paramedics.