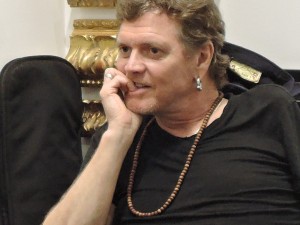 Rick Allen, longtime drummer for Def Leppard, listens to some stories from fans during an appearance Aug. 31, 2015, at Wentworth Gallery in King of Prussia, PA.
(Photo by Mike Morsch)

I was reminded this week that I once successfully employed the Def Leppard Method of Babysitting when my oldest daughter was an infant.

That’s because I had the chance to interview and meet Rick Allen, who has been the drummer for Def Leppard since the late 1970s. Allen was appearing at Wentworth Gallery in King of Prussia, PA, along with his art exhibit “Rick Allen: Angels and Icons” in conjunction with a Def Leppard concert the following evening in nearby Allentown, PA. Wentworth Gallery curator Tom Curley, a dear friend with whom I have worked many times on stories, invited me to do a piece on Rick’s appearance and come out to the gallery and meet the rock star.

Talking to Rick took me back to 1988 when I became a father for the first time. In those days, we were a young family that needed to have two working parents with opposite schedules. When one of us was working, the other would care for the baby. I liked the arrangement because it allowed me to spend quality time with my daughter and it saved us the cost of daycare, which we couldn’t afford anyway.

In those early days, the baby was nursing. But that created a problem for ol’ Dad when Mom was at work: I did not have the proper equipment for the task at hand. This did not make the young lady happy, and as a result, she spent a good deal of our time together giving me seven kinds of what for.

I’m not exaggerating. She was like a baseball manager who was upset with an umpire’s call and she was determined to get in my face and take a chunk out of my hide, even though there was little I could do to change the situation. I’d try to feed her with the milk her mother had left, I’d make sure she was changed, I’d rock her in the chair, walk her outside, snuggle with her, make funny faces. Nothing seemed to help.

It wasn’t a situation that could be fixed with the usual Dad tools: duct tape and WD40. And faced with seemingly unsolvable challenges, Dads are sometimes forced to improvise.

At that time, in the late 1980s, MTV and VH1 would play music videos all the time on TV. I usually had one of the channels on to listen to the music and watch the videos, something to help drown out the noise from the constant chewing out I was getting from one peeved little lady who wanted to nurse and couldn’t. I thought maybe the music might help sooth the situation.

But it didn’t. At least it didn’t until one day when the video for “Pour Some Sugar on Me” by Def Leppard was played. The song, released as a single off the band’s 1987 album “Hysteria,” reached No. 2 on the Billboard Hot 100 charts in July 1988, right around the time my daughter was six months old and had perfected her Earl Weaver imitation.

Fortunately for me, the song and video were popular and were played regularly on both VH1 and MTV. But it took a couple of times for me to notice that whenever the video was played, my daughter would stop crying and stare at the television. All it took was a little “Hysteria” to help solve her hysteria. Go figure.

Naturally, that gave me an idea. The technology in the late 1980s was such that I could have a blank tape in the VCR, set and ready to record “Pour Some Sugar on Me” the next time it was played.

And it worked like a charm. Once I had the video recorded, all I had to do was sit my daughter in her bouncy chair in front of the TV and hit the play button. The only problem was that there seemed to be no other song that would pacify her. I experimented with different artists and different songs but it was only Def Leppard and “Pour Some Sugar on Me” that did the trick. All I had to do was constantly hit rewind all day long, a small price to pay for some moments of peace.

She couldn’t talk and tell me what she was thinking then, but I did sense from the way she looked at me after the discovery that it was something like, “OK, man. You let me watch rock and roll videos when Mom isn’t here. Maybe you’re not such a pain in the ass after all. I will allow you to continue to be my Dad in relative peace.”

That was 27 years ago. I was able to share that story with Rick when we talked this week and I thanked him for helping me babysit in 1988. Fortunately, he did not ask for any compensation from me for his contributions to the effort.

My daughter and I are still Def Leppard fans. But we don’t rock out when we hear “Pour Some Sugar on Me” today. We listen. Quietly. And we are reminded of the time when father and daughter came to an understanding all those years ago, courtesy of some rock legends.