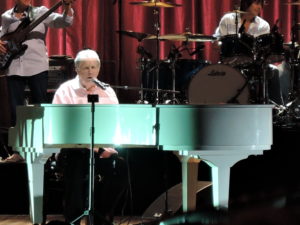 Brian Wilson sings “Surfer Girl” at his show on June 29, 2015, at the Mann Center for the Performing Arts in Philadelphia.
(Photo by Mike Morsch)

Music speaks to different people in different ways. But there is a point in every Brian Wilson show that lasts a little more than two minutes that I claim as my own: It’s when he sings “Surfer Girl,” and like a great song does, it brings back a flood of memories that touches deep in my heart and soul.

It reminds me of the time that Brian once rode along with me in my car when I really needed him.

On Jan. 4, 1988, a bitterly cold day, I had just arrived to work at a newspaper in La Salle, Illinois, when I got a phone call from my wife. “You’d better come home. Something is wrong and I think we need to go to the hospital.”

She was pregnant with our first child, but it was 10 weeks from the scheduled due date. I rushed home, got her and we departed for the hospital, a small, rural medical facility in nearby Spring Valley, Illinois.

Our physician, Dr. Basilio Padilla, was summoned, did an examination and determined that my wife was in labor. But it was way too early, and Dr. Padilla admitted her into the hospital, the plan being to use whatever drugs and technology was available at the time to stop the labor.

Dr. Padilla was highly skilled medical professional. A soft-spoken gentleman, he oftentimes had a smile on his face, and on this day, his demeanor and that smile assured me that he had this thing under control.

After enduring several hours of intravenous drugs being pumped into her system, my wife appeared to have steadied the ship. Dr. Padilla pronounced the crisis averted around 4 p.m. that day, but the situation was still considered high risk and bed rest was prescribed for the remaining 10 weeks of the pregnancy.

What did not improve was the weather. High, bitter winds had dropped the temperature to minus 50 – no exaggeration there – with the wind chill. We happened to be the only patients on the OB/GYN floor that day in the small hospital, and there were only two shift nurses on duty. For much of the late afternoon and early evening, I would go out to my car and start it, just to make sure it didn’t completely freeze up.

Since this was the first grandchild on both sides of the family, I had called my parents, who lived near Peoria, Illinois, and my wife’s parents, who lived in Iowa City, Iowa, and told everybody to stay put. The crisis was under control and there was no need for them to drive to the hospital in that kind of weather.

And then, around 10 p.m., life changed forever. Whatever drugs had stopped the labor were no longer doing the job and my wife went back into labor. Dr. Padilla was called back to the hospital, performed another examination on my wife, and asked me to step into the hallway outside the hospital room.

He proceeded to explain to me that he was going to request a delivery team from St. Francis Medical Center in Peoria, and that they would be there within the hour via helicopter. The plan was that after delivery, the baby would be transported on that same helicopter back to the neonatal unit in Peoria. In that bitter cold, dangerously windy weather.

By 1 a.m. on Jan. 5, I found myself alone in the dads waiting room with the fate of my family in the hands of medical professionals just down the hall in the delivery room.

It was the most lonely and helpless moment of my life.

At 1:45 a.m., one of the local nurses came into the room and said, “You have a baby girl. I’m going to take you to see her, but they’re preparing her for transport, so you’ll only have a few moments.”

And then I saw her for the first time. I was told she weighed 2 pounds, 4 and one-half ounces. A neonatal nurse was holding the back of her head with one hand, in an upright position. With the other hand, the nurse had what looked like the head of a hammer – I found out later it was made of foam rubber – placed between her index and middle fingers, and was furiously tapping on the baby’s chest. Alarming at first sight, I was told later that the procedure helped prevent fluid from building up in the baby’s lungs. That first glimpse of my daughter lasted maybe two minutes.

Before long, my wife and I ended back in her hospital room. By 5 a.m. the medical team and baby were ready to get on the helicopter for Peoria. They wheeled the baby in an incubator back into our room so that we could see her before they left. We couldn’t reach into the incubator and touch her because she was wrapped in tinfoil and bubble wrap, her little face the only visible part we could see.

And then we waited. The helicopter had to battle those cold winds and the baby had to survive the trip. We would get a call when they arrived in Peoria.

At 6 a.m. the call came. The baby had survived the trip.

I had alerted my parents that the baby was being transported their direction. The plan was for them to meet the baby at the hospital, and that I would be there as soon as I could.

I got into my freezing cold car, and thankfully, it started. And once again, I found myself alone, with an hour to drive and with no idea whether my baby would still be alive by the time I got there.

All I had along with me for the ride was music. It was before the era of CDs, so I had cassettes, and one of my favorite records was “Endless Summer,” a compilation album by the Beach Boys that was released in 1974. That’s the tape that I popped in for the drive.

For some reason, I went right to the song “Surfer Girl.” I had heard it hundreds of times before, but this time it was different. The first two lines of the song took on a dramatically different meaning this time.

“Little surfer, little one. Made my heart come all undone.”

My baby girl was tiny. And I had immediately given her my heart.

When “Surfer Girl” would end, I would rewind the tape and play it again. Over and over, for the entire ride, I played “Surfer Girl.” I sang and I cried and I prayed that my baby girl would be alive when I got to Peoria.

I arrived at the hospital and my dad was waiting for me at the front door. We embraced. “Is she still alive?” I said. “She’s still alive,” he answered.

After being released from the hospital, my wife went to stay with my parents so she could be in the neonatal unit every day with our daughter.

But real life doesn’t halt for very long in these situations and I had a job. So twice a week for five weeks, on Wednesdays and Sundays, I would drive the hour from La Salle to Peoria to see my baby. And every time I got in the car, I’d put on that Beach Boys tape and play “Surfer Girl” over and over. And I’d sing and I’d cry and I’d pray. She needed to be alive every time I got there and I didn’t want to change that routine. It worked the first time.

That was 27 years ago. And when Brian Wilson sang the words, “Little surfer, little one. Made my heart come all undone” Monday evening, June 29, at the Mann Center for the Performing Arts in Philadelphia, it all came flooding back, touching me deep in my heart and soul as it always has.

And to my left, with her head on my shoulder, her arm locked in mine and her hand gently tapping on my forearm along with the beat of the song, was my daughter Kiley. She’s an adult now, but she’s still my little one. And she still makes my heart come all undone.

A lot of Brian Wilson’s songs are about love. What a wonderful gift he has given us.

Dad and daughter. Happily ever after.