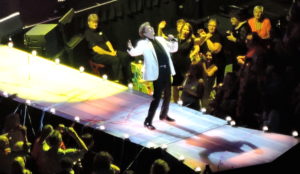 We all kind of chuckled at that, likely because we were all kind of thinking the same thing. And no sooner had that comment been uttered when into the men’s room walked seven or eight women, intent on sharing our facility because the line to women’s restrooms were too long and they really had to go.

It wasn’t a scenario that I necessarily anticipated that I would experience at a Barry Manilow concert, but very little concert behavior surprises me anymore. Women using the men’s room at a concert elicits a mere shrug of the shoulders from me these days.

What did surprise me – but only slightly – is something that I have come to accept now that I have seen Barry Manilow in concert three times: I am a “Fanilow.”

And it all started quite innocently. 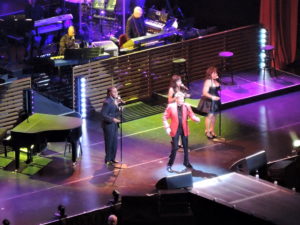 Barry performed on the same evening in Philly as did Taylor Swift, who was right next door at the football stadium.
(Photo by Mike Morsch)

Prior to meeting her, I had never seen Barry live in concert. But I am very much into the music of the 1970s and he is one of the quintessential stars of that decade. Because of that, I realized after seeing him in concert the first time that I actually knew many of the words to many of his songs.

Attending this concert, however, was a Game Day decision. Apparently I had been informed several weeks ago by Mrs. Vinyl Dialogues that Barry was going to be performing in Philadelphia and that it might be a good idea to secure a few tickets for her as a birthday present.

Because I am a typical man, though, that entire conversation had somehow escaped me, no doubt because I was worried about something more important, like grilling meat. So when the sentence “Hey, Barry is in town tonight and there are tickets available,” came out of her mouth, my ears perked up.

I am not a complete dope – most of the time. And I sensed an opportunity to grab two tickets to the show and maybe correct the earlier error of my ways because, well . . . I right the wrongs, I right the wrongs.

After calling the venue and securing the tickets, off we went into South Philly, that despite one very big warning signal: Taylor Swift was performing a concert in the football stadium right next to the arena where Barry was performing. At the same time. The South Philly sports complex had the potential to be the hottest spot north of Havana and a traffic nightmare.

But it didn’t turn out that way. Taylor’s show started at 5 p.m. and Barry didn’t start until 7:30 p.m. Taylor is young and her crowd is younger, so they can stay up later and watch her perform. Barry is older, and so is his crowd, so we were done earlier. There was no traffic cluster coming or going.

And let me assure you that Barry, who will turn 72 this month, still delivers the goods. He’s a showman with great stage presence and great songs. And he seems like a nice guy, something I can confirm as I have interviewed him in the past. He always seems generally grateful onstage to the fans for the long career he’s had and he expressed that same sentiment to me on the phone when we talked.

Every “Fanilow” has a favorite song or two and mine are “Copacabana” and “I Write the Songs.” Let me share a little history about the latter.

Most people probably know that Bruce Johnston of the Beach Boys wrote “I Write the Songs,” for which he won a Grammy Award for Song of the Year in 1977.

Having interviewed Bruce several times – he appears in both The Vinyl Dialogues and the upcoming release, The Vinyl Dialogues Volume II: Dropping the Needle, which will be available around Aug. 1 this year – I’ve had the opportunity to talk to him about the creation of “I Write the Songs.”

“By the way, if you ever read that I wrote ‘I Write the Songs” about Brian Wilson, forget about it,” said Johnston. “The song is a hymn to God for being the person that starts it all. ‘I’ve been alive forever, and I wrote the very first song.’ It gets me nuts when people say I wrote that song about Brian.”

And just like Saturday night, fans still go nuts when Barry sings “I Write the Songs.” It’s one of those tunes that does indeed make the whole world sing.

And it was clear that all the “Fanilows” in Philly knew that.