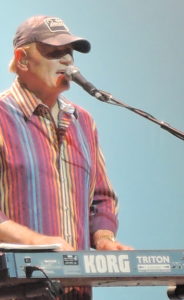 Bruce Johnston of the Beach Boys performs at the Borgata in Atlantic City.
(Photo by Mike Morsch)

While waiting for the Beach Boys/America concert to start in the ballroom of the Borgata in Atlantic City Saturday evening, April 18, a little old lady came in and sat down beside me.

I don’t think she was from Pasadena. Atlantic City is, after all, a long way from California. (Beach Boys fans will get that joke.)

She was quiet throughout the hourlong set by America – Dewey Bunnell and Gerry Beckley – who sound as good today as they did 40 years ago when they were making their fifth studio album, “Hearts,” which will be featured in “The Vinyl Dialogues Volume II: Dropping the Needle.”

America has always been one of my favorite bands, but this was the first time I had the opportunity to see them live. There aren’t enough adjectives to describe how good these guys are and how much I love their songs. So it’s no surprise to say that I enjoyed their performance.

When America finished its set, closing with “A Horse With No Name,” the first hit single for the band, which was released in 1971, the little old lady turned to me and said, “Was that the Beach Boys? Is that all?”

I explained to her that it was the band America that we had just seen and that the Beach Boys would be coming out next.
“Oh, I wasn’t sure. Those guys didn’t sound like the Beach Boys,” she said. 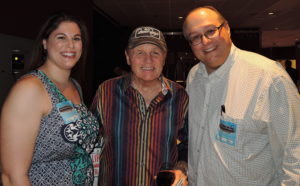 After the Borgata show, we got to meet Bruce. That’s daughter Kiley, Bruce and the author.

No, they didn’t sound like the Beach Boys to me either. For one thing, they’re younger, a joke that Beach Boys frontman Mike Love made himself later in the show. But Bunnell will tell you that he and Beckley love the Beach Boys, that they did influence America and that members of the two bands have been friends for decades and have performed on the same bill many times over the years.

The Beach Boys and America – they are the fabric of American music – provided much of the soundtrack of my life when I was growing up in the Midwest in the 1960s and 1970s.

This was a special concert for me for a couple of other reasons as well. I was accompanied by my oldest daughter, Kiley, who grew up with this music. We have a special bond that is linked in part by Beach Boys music. I did feel somewhat bad stealing her away from her husband on a Saturday night, but only for a little bit. From a selfish standpoint, she’s still my little girl. But as an adult, she’s great to hang with and she appreciates the music. 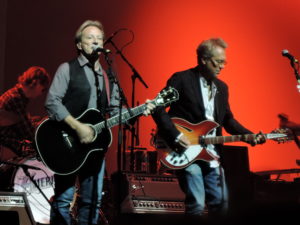 Dewey Bunnell, left, and Gerry Beckley of the band America sound just as good today as they did in the 1970s.
(Photo by Mike Morsch)

It was also a special evening because we were the guests of Bruce Johnston of the Beach Boys. Bruce provided a great interview in “The Vinyl Dialogues” detailing his role as producer of David Cassidy’s first two solo albums after Cassidy’s TV show “The Partridge Family” had ended its run. I hope to interview Bruce again for Volume II, this time about a Beach Boys album.

It wasn’t the first time I had met Bruce. In 1986 at a Beach boys concert in Rockford, Illinois, I was part of a media contingent invited to a pre-concert “Beach Party.” Bruce was the only band member to appear at the event, so he was inundated by the media. There is a photo of me standing next to Bruce, pen and reporter’s notebook in hand, and sporting a full head of curly hair.

The Beach Boys themselves – the Mike Love/Bruce Johnston group – still rock. There is still an energy coming from the stage that can make one forget that these guys are in their 70s and that they’ve been doing this for more than 50 years.

For the record, I don’t get into all that offstage Beach Boys hoo-ha. I love Brian Wilson, Al Jardine and that band. And I love Mike Love, Bruce Johnston and that band. I loved that they were all together for a series of 50th anniversary shows a few years ago and that I got to see one of those shows with my daughter.

But for me, it’s only about the music and what it means to me.

We were fortunate to meet Bruce after the show. He was gracious, signed a few autographs – including the photo of him and I from 1986 – posed for a photo and chatted a bit.

“I’ve been coming to Beach Boys concerts since I was three years old,” my daughter said to him.
“Me too,” said Bruce.

It was as close to a perfect evening as it could be.

Oh, and the little old lady? Without saying a word, she just got up and left about two-thirds of the way through the Beach Boys’ set.

Maybe she was headed back to Pasadena after all and wanted to get ahead of the traffic.