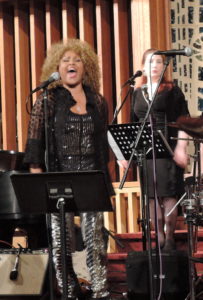 Rock and Roll Hall of Fame inductee Darlene Love will be featured in The Vinyl Dialogues Volume II: Dropping the Needle.
(Photo by Mike Morsch)

Lou Adler was looking for some help. He was producing Cheech & Chong’s third comedy album, Los Cochinos, in 1973 and the duo was in the recording studio ready to make the song “Basketball Jones.”

Since it was an actual song and not a comedy bit, Adler needed some real musicians to sit in on the recording session, which was being done at A&M Records on North La Brea Avenue near Sunset Boulevard in Hollywood.

In addition to managing the careers of Cheech & Chong, Adler also managed a veritable All-Star lineup of other artists: Sam Cooke, Carole King and The Mamas and The Papas, among them. So Adler started making calls to some of those artists asking them to come on down to the studio and participate in the recording of “Basketball Jones.”

The day of the recording session, Adler also went through the A&M studio seeing who else was recording that day and asking them to be part of “Basketball Jones.” That list included Ronnie Spector, Billy Preston, Klaus Voormann, Jim Karstein, Jim Keltner and a pretty famous guitarist named George Harrison. That’s Harrison playing the intro to “Basketball Jones.”

Also in the studio that day were The Blossoms – Darlene Love, Fanita James and Jean King. By 1973, they had developed a reputation of being the best backing vocalists in the business and had performed on many of the biggest hits of the 1960s.

Adler thought the vocals of The Blossoms, along with those of Michelle Phillips of The 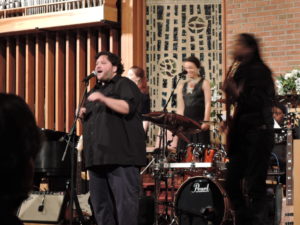 Philadelphia singer-songwriter Mutlu was part of an “All-Star Tribute to Marvin Gaye” on March 28, 2015, in Ewing, N.J.
(Photo by Mike Morsch)

Mamas and The Papas and Ronnie Spector, would be perfect as “cheerleaders” for “Basketball Jones.”

“That was a lot of fun,” said Ms. Love in a recent telephone interview. “Lou would say, ‘OK, come on girls, what are we gonna do here?’ The first hour of the session was laughing and talking. And then we’d come up with little things and four or five hours later, we were still trying to do the song.”

Ms. Love will be featured in The Vinyl Dialogues Volume II for her role in the 1972 album “Billy Joe Thomas” by B.J. Thomas. She and The Blossoms provided backing vocals on Thomas’ big hit off that album, “Rock and Roll Lullaby.”

She was recently in the area on Saturday, March 28, 2015, as the headliner for an “All-Star Tribute to Marvin Gaye” as part of the Candlelight Concerts for Epilepsy Awareness, an ongoing nonprofit epilepsy awareness series held at Trinity United Methodist Church in Ewing, N.J.

The event was organized by Eric Miller, whose wife died from an epileptic seizure, as a way to bring awareness to the issue. You can get information about Miller’s Candlelight Concerts by going to www.CandlelightConcerts.org and more about the affliction by going to the Epilepsy Foundation of New Jersey’s website at www.efnj.com.

Mutlu, a frequent opener for Hall & Oates shows as well as solo gigs for both Daryl Hall and John Oates, also has also toured extensively with his friend and fellow Philly artist Amos Lee.

It was a great night of Marvin Gaye music played to a packed church for a good cause. And yes, there were a few jokes made about the fact that two of Gaye’s biggest hits, “Let’s Get It On” and “Sexual Healing” were performed in a church.

The backing band for the evening was outstanding, under the musical direction of bassist Doug Wimpish, also of Living Colour. It included guitarist Paul Pesco, who has worked with Hall & Oates and Madonna; Calvin Weston on drums, David Dzubinski on piano with Allison Polans and Imani Roach provided backing vocals.

The next two Candlelight Concerts will pay tribute to the music of Paul McCartney and Joni Mitchell. If you’re in the northeast part of the country, you should check them out.