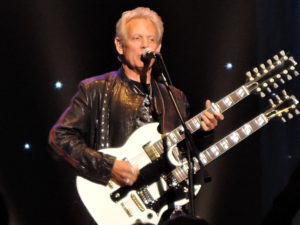 Former Eagles lead guitarist Don Felder brings out his 12-string guitar for the encore of “Hotel California” at his solo show March 21, 2015, at the State Theatre in New Brunswick, N.J.
(Photo by Mike Morsch)

In a an interview with Don Felder to preview his March 21, 2015 show at the State Theatre in New Brunswick, N.J., I mentioned to him as someone who grew up in the 1970s, it’s difficult for me to stand up for an entire concert at this age.

“That’s why we’re playing theaters, so you can sit down until it’s time to get up and start rockin’,” said Felder, who will be featured in The Vinyl Dialogues Volume II talking about the making of the Eagles 1975 album “One of These Nights.”

That Don Felder – known as “Fingers” when he played lead guitar for the Eagles – can play guitar is not breaking news. He’s among the best guitar players in the world.

Felder wrote the music – with lyrical help primarily from Don Henley, with contributions from Glenn Frey – on a 12-string guitar that features several distinctive guitar parts, for “Hotel California,” one of the Eagles’ most famous songs. In fact, it’s one of the most recognizable songs in rock history. The song’s guitar solo by Felder was voted the best solo of all time by readers of Guitarist magazine in 1998 and was ranked 8th on Guitar Magazine ’ s Top 100 Guitar Solos.

“When I was writing and arranging ‘Hotel California,’ the music for it, I used a 12-string guitar. And little did I know to this day I would still be playing the 12-string guitar at every show every time we do that song. I should have said, let’s just do this on a regular six-string guitar,” said Felder.

Hearing Felder play “Hotel California” live on the 12-string is one of those things rock fans from the 1970s ought to put on their bucket lists. It was magic in 1976 when it was recorded and it was magic seeing it Saturday night at the State Theatre.

Felder, who parted ways with the Eagles for good in 2001 and wrote a tell-all best-selling book about it called “Heaven and Hell: My Life in the Eagles (1974-2001),” has been a solo artist for a while now. And he knows his audience. After all, his show is called “An Evening at the Hotel California.”

He knows the crowd is filled with Eagles fans who wants to hear Eagles songs. Although he mixed in a few songs off his latest CD, “Road to Forever” and a few other tunes, his set was heavy with many great Eagles hits, including “Take It Easy,” “Witchy Woman,” Tequila Sunrise,” “Already Gone” and “One of These Nights.”

With Felder’s vocals – he didn’t really step out front much on lead during his time with the Eagles – and his killer band, it was too much for many in the crowd. Midway through the show, people crowded the stage and packed the aisles dancing and singing.

“Pay no attention to the ushers, get up and dance,” said Felder.

I don’t know if that made the ushers too happy, although it did get them off the hook from pestering people to put away their cell phone cameras. After Felder’s pronouncement from the stage, there were no longer any rules.

Felder knew that because he had mentioned it to me in the interview.

“About three-fourths of the way through the show, if not sooner, everybody in the place is up on their feet and singing along with the songs, clapping their hands and dancing, just having a great time,” he said.

And to the credit of the crowd, it was a controlled enthusiasm. A lot of singing and dancing, but nobody got out of hand.

By the time Felder brought out his 12-string for the final song – the only time the 12-string made an appearance to that point – everyone knew what was coming: Welcome to the Hotel California.

And it’s true. When it comes to seeing Don Felder play “Hotel California” live on the 12-string guitar, you can check out any time you like, but you can never leave.