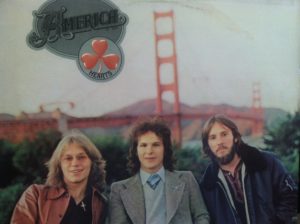 This is a photo of the cover of “Hearts,” a 1975 album by the band America.
(Photo by Mike Morsch)

An interview with Dewey Bunnell of the band America about the album “Hearts,” which will be featured in The Vinyl Dialogues Volume II, reminded me of one of my favorite coming-of-age stories from my youth: my first experience with a “wardrobe malfunction.”

It was the summer of 1975 after my sophomore year in high school, and I hung out quite a bit with my pal, Dan Brewington. Dan lived in one of the higher-end neighborhoods called Sunset Hills in our central Illinois town. It had its own country club with a swimming pool, restaurant and 18-hole golf course.

One had to be a member of the country club to use the swimming pool, and Dan’s parents were members. And the children of members could invite friends over to swim during the summer. There was a two-visit limit for any non-member, but Dan knew the kid who manned the entrance to the pool and I was waved in several times that summer.

The pool area had a snack window with a public address system that played the radio over speakers so that the swimmers could enjoy the music of the day – all our favorites from the mid-1970s. America was a hot band in 1975, and it wasn’t unusual to hear its hits while we enjoyed the pool.

Once inside the pool area, we did what all normal 15-year-old boys did in the 1970s – we engaged in shenanigans and tomfoolery. One such activity was called “Old Bag Splashing.”

“Old Bag Splashing” is exactly what it sounds like. In addition to attracting its share of teenage boys, the Sunset Hills Country Club pool attracted quite a few moms who enjoyed sunbathing.

While lying on their stomachs facing away from the pool, the moms would be unaware of what the group of teenage knuckleheads – which usually included Dan and me – were up to. We would slip into the deep end, swim stealthily the length of the pool, then pop up at the other end where we would thrash about and splash the “old bags.”

They did not like it much. We, of course, thought it was hilarious. What’s funny now, though, is that if we were 15 years old, those moms sunning themselves likely were in their late 30s or early to mid-40s. They were “old bags” to us, but they weren’t old at all.

I quickly tired of “old bag splashing” that summer because I was becoming interested in something else: girls. And there were plenty of teenage girls in bikinis hanging around the Sunset Hills Country Club pool. It did not take me long to realize that looking at girls in swimming suits was much more entertaining than splashing old bags.

Even back then, though, I couldn’t see past my nose without my glasses. When I was actually in the pool, I would leave my glasses with my towel on one of the poolside chairs. That meant I couldn’t get a clear view of the girls if I was in the water.

I decided it would be better to observe than to swim. So I would leave my glasses on and sit by the side of the pool, dangling my legs in the water while surveying the scantily clad girls my age.

It was a solid strategy for a knucklehead. One day, I spotted a young lady in a red bikini whom I didn’t know. She didn’t go to our high school, so maybe she was a guest.

I watched as she swam the length of the pool, seemingly with ease, and I was mesmerized. Strikingly good-looking and an athletic swimmer, it seemed as if her every move was in slow motion.

It all happened so quickly. She finished a lap the length of the pool, then swam over to the side, directly opposite to where I was dunking my legs in the water while trying to simultaneously be cool and not gawk.

As she pulled herself out of the water and onto the edge of the pool in one fluid motion, her left boob slipped out of its holster, and without her knowing it, appeared in all its glory for what seemed like an eternity.

And I had the best seat in the house.

It was the first time I had ever seen anything like that. Without overstating it, I was, in a word, impressed. It must have only been three or four seconds until she realized something was amiss, and she quickly recovered and stowed the valuable asset back into its appropriate cover.

I never approached her that day, never knew her name and never saw her again at the pool.

But what I also remember at the very moment of the big reveal was the song that was playing on the snack stand public address system when it happened.

It was “Sister Golden Hair” by America, from the 1975 album “Hearts,” the very same album I talked with Dewey Bunnell about this week that will be featured in The Vinyl Dialogues Volume II.

The only thing that would make this story better is if the young lady at the swimming pool was a blonde. Alas, she was not. She was a brunette. I think.

I wasn’t exactly focused on her hair.