In my most recent interview with John Oates, he shared the story about what inspired he and Daryl Hall to name their seventh studio album “Along The Red Ledge” in 1978.

The story of making that album and the music on it will be detailed in The Vinyl Dialogues Volume II, which will be out later this year.

But the inspiration for the title had come to John a decade or so earlier, in a literature class at Temple University in Philadelphia.
Hall & Oates fans likely know that both artists went to Temple.

In fact, I just assumed most music fans in the greater Philadelphia area, and possibly the entire Northeast, were aware that the two met at Temple.

Certainly Temple University is well aware of two of its most famous students, right? 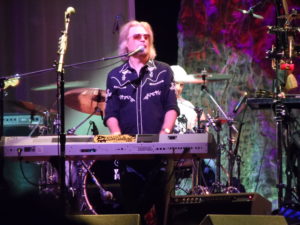 Daryl Hall takes to the keyboards during a Hall & Oates show at the Borgata Hotel in Atlantic City in 2013.
(Photo by Mike Morsch)

My stepson is in the process of narrowing down his college choices and has been accepted to Temple University. He is leaning heavily in that direction, so as part of the process, we recently attended “Experience Temple Day,” a daylong introduction for prospective students, some of whom have already committed to Temple and others who have yet to make a decision.

We all gathered just before 9 a.m. on a Saturday – about 12,000 students and parents – in a theater on campus. It was colder than a witch’s wazoo, so they opened the doors well in advance of the 9:30 a.m. orientation start time.

To keep us occupied and entertained, Temple student ambassadors were scattered throughout the theater and on stage, showing us to our seats, singing, dancing around and generally acting like the cheerleaders they were supposed to be for the event.

Our emcee for the morning was Billy from Lancaster, PA, and he was indeed enthusiastic about his job. But it took all of about two minutes for me to realize that Billy was going to be one of those guys that got on my last nerve. And in a hurry.

Now I understand that he was just doing his job. Nobody wants a college orientation emcee to come out on stage and just stand there and scratch his ass. What kind of message does that send to students and parents? “Come to Temple, where we have one of the top Ass Scratching Departments in the country.” That’s unlikely to make it into the recruitment brochure, I suspect.

No, Billy’s job was to be the head cheerleader, and I realized that, so I cut him some slack on his overly enthusiastic approach to the job because that is exactly what the task called for, without regard for my last nerve.

On the big video screen behind Billy, a PowerPoint presentation was flashing up Temple-related questions. Things like, “In what year was Temple founded?” The idea was that if one tweeted the correct answer to the question with the designated Temple hashtag, then one could win a free Temple t-shirt.

It was not enough to entice me to play. I have 72 t-shirts from my college, The University of Iowa. I do not need a Temple t-shirt.

One of the questions that did interest me, though, was this: “Which famous musical duo went to Temple?” It was a multiple choice question. The answers were: (1) Simon and Garfunkel. (2) Hall and Oats. (3) I never got to the third one.

See, as one who makes a living with words as both a writer and editor, I usually notice when something is misspelled. And one of the very first rules of newspaper journalism is, “Spell the name correctly.”

Right there, at Temple University, on the big video screen, the school had misspelled John’s last name as “Oats” and not correctly as “Oates.” (And, no, I don’t think they were referring to the duo’s first album from 1972.)

I can’t imagine I was the only one in the theater that noticed it, but there was no discernible outrage coming from any other part of the theater.

“Hey, hey, hey! They spelled John’s last name wrong!” I said to Mrs. Vinyl Dialogues. I was so flummoxed that I failed to even see who the third famous musical duo was listed on the multiple choice question. It could have been Bert and Ernie for all I knew.

Before I could calm myself – it must have been only a few moments – Billy from Lancaster announced that someone had tweeted the correct answer.

Honest of Pete, people. I don’t have enough foreheads and palms for all the head-slapping that kind of mistake prompted. First Temple can’t spell John’s last name correctly in very big type on the video screen, then nobody briefed Billy from Lancaster about the correct names of two of the school’s most famous students?

I guess that memo on the Rock and Roll Hall of Fame induction didn’t get to everybody at Temple, huh?

As a longtime chronicler of Hall & Oates’ exploits over the years and a big fan of their music, I felt it was my responsibility to point out this egregious error. It certainly appeared I was the most qualified guy in the building to do so as I was the only one slapping my forehead and shouting “Billy, Billy, Billy, no, no, no!”

A stiff elbow to the ribs from Mrs. Vinyl Dialogues curtailed my outrage and brought me back to the reality of the situation. Good thing, too, because I was just about to stand up and shout, “Hey all you kids who don’t know who Hall & Oates are, get off my damn lawn!”

I decided it best to cut Billy even more slack – surely his parents knew who Hall & Oates are – and we progressed through the rest of the orientation without any further insults to Hall, Oates, me or my last nerve.

The length of the presentation, however, suggested a restroom break was in order.

As I meandered around the theater lobby looking for the men’s room – wondering if that elbow to the ribs was going to require hospitalization – I spotted none other than Billy from Lancaster, who was headed into the restroom ahead of me.

Good, I thought to myself, I can represent Hall & Oates Nation admirably and right the wrongs that Billy and Company had committed that day.

But I thought better of that plan. There is usually no tomfoolery or shenanigans in a men’s room. We gents are in there strictly for business, and it’s not the appropriate venue to discuss the finer points of Hall & Oates history.

Certainly I could have waited for Billy outside the restroom, but by then, I was annoying even myself for not being able to just put the whole thing behind me.

Still, it’s the lack of attention to detail that bothered me. As a prestigious institution of higher education, I can’t quite believe Temple didn’t get it exactly right when it came to two of their most famous students.