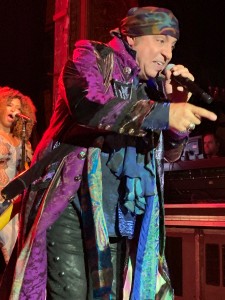 Stevie Van Zandt, a member of Bruce Springsteen’s Rock and Roll Hall of Fame group the E Street Band, brought his Little Steven and the Disciples of Soul show to the Keswick Theatre in Glenside, PA, Saturday, July 20.
(Photo by Mike Morsch)

If you’ve got a favorite band who you’d like to see live, do yourself a favor and spend the money to sit in the front row. And if Stevie Van Zandt sticks a microphone in your face, make sure you know the words to the song he wants you to help sing.

Little Steven and the Disciples of Soul were at the Keswick Theatre in Glenside, PA, Saturday, July 20. I had been carrying around a gift card from Christmas and was looking for the right concert on which to spend it. And I wanted to see Little Steven.

Front row tickets aren’t always affordable, but for this show, they were. Only $81.50, which is a bargain for a Rock and Roll Hall of Famer. It seemed like the perfect way to treat myself with the gift card that was suddenly burning a hole in my wallet. I could hear my wallet screaming at me: “It’s Little Steven, you idiot! Jersey Shore sound. E Street Band. It’s a no-brainer!”

Sitting that close provides the chance to interact a bit with the artist, and I got my opportunity late in the show during an audience participation song.

Stevie walked right up to me at the edge of the stage and stuck the mic out. Now, I had just perfectly executed a singalong at a bar in Sea Isle, N.J., the week before when the artist held the mic out to me to sing the chorus of “Build Me Up Buttercup,” the hit single from The Foundations in 1968.

But when Stevie looked down and pointed the microphone at me, we weren’t singing “Build Me Up Buttercup.” I know the words to that song.

Oh, fer crissakes (face palm). How embarrassing. I finally got my 15 seconds of fame and turned it into five seconds of shitmouth. I’m pretty sure Stevie was thinking, “Man, you really fucked that up Mikey. Why don’t you and me take a little ride. I hear the Pine Barrens are pretty this time of year.”

Ok, I’ll sit down and shut up for the rest of the concert.

But Little Steven and the Disciples of Soul put on a great show. Stevie had been upset on Twitter at a recent review of the show where the reviewer thought the band had mailed it in. But I didn’t see any of that. There was a seemingly endless energy from everybody on stage for two and a half hours. And we even got to see Stevie’s wife, Maureen Van Zandt (who also played the wife of his character Silvio Dante in “The Sopranos”), who came out to dance with him on “Soul Power Twist,” one of the fabulous songs — along with my other favorites “Love Again” and “A World of Our Own” — on his new album “Summer of Sorcery.”

I’m not only a fan of his music, but I’ve been a fan of Stevie’s persona for a while now. What a wonderfully pleasant guy to talk to. He’s a walking history book of music knowledge. I’ve gotten to interview him twice for advance stories that I was doing, once when he was producing a series of reunion shows for The Rascals several years ago, and more recently to advance a show he was doing a couple of years ago at the Count Basie Center for the Arts in Red Bank, N.J., kind of his home turf venue.

What I really enjoy taking to him about though is his role — along with Bruce Springsteen (more than 600 words in this piece and this is the first mention of Springsteen) and Southside Johnny & the Asbury Jukes — in the development of what we now know as the “Jersey Shore sound.” His interview, along with an interview I did with Southside Johnny Lyon, will appear in a chapter about Southside’s first three albums in “The Vinyl Dialogues’ Greatest Hits: Volume V,” which I’m working on now. 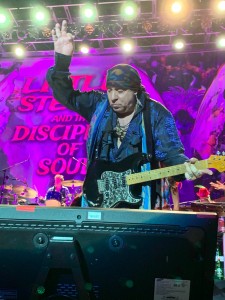 Stevie Van Zandt — along with Bruce Springsteen and Southside Johnny Lyon — were instrumental in the development of the “Jersey Shore sound.”
(Photo by Mike Morsch)

Here’s a sample of what Stevie said:

“The bar bands’ configuration, the bar bands’ sound, the bar bands’ music, literally changed its definition with Southside Johnny & the Asbury Jukes,” said Van Zandt. “Before that, bar bands were strictly Top 40. And only with the Jukes did they become synonymous with soul music and rhythm and blues, which is what all bar bands are considered to be now — their standard format. That wasn’t the case before the Jukes.

“It really did help to integrate the ‘Jersey Shore sound’ and at the time, really start to flesh out that sound. When there is more than one artist working, it starts to make the whole context more interesting,” said Van Zandt, who produced the first three Southside albums in the 1970s and wrote or co-wrote several songs for this albums, including “I Don’t Want to Go Home,” “This Time It’s for Real” and “Love on the Wrong Side of Town” with Springsteen. “What we had with Southside, I really didn’t appreciate it until later when someone explained to me how we had redefined the entire bar band definition and sound.”

Stevie’s sound — as well as his musicianship and showmanship — were on full display Saturday night. The Disciples of Soul killed it. And I walked away from the merch table with a tour poster, hat and the “Summer of Sorcery” CD.

My wallet was right. Sitting in the front row for this concert was indeed a no-brainer.

The Disciples of Soul having some fun at the Keswick Theatre in Glenside, PA.
(Photo by Mike Morsch)