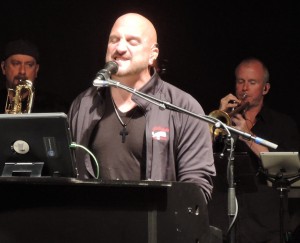 But I didn’t know any of that the first time I heard DelGuidice and Big Shot. And I love those moments when I first discover an artist whose work I hadn’t previously known. I research the artist, listen to his/her stuff, become a fan and start to follow them, keeping an eye on the touring schedule to see when they’re coming back to my area.

And Friday, June 14, DelGuidice and Big Shot returned to the Ambler (Pa.) Arts and Music Festival and there we were, The Blonde Accountant and I, in our lawn chairs with the rest of the sinners and saints. To know exactly how big a deal this was, not many artists can get us out of the house on Friday nights. By the end of a long work week, we’re pretty much asleep as soon as dinner is finished. 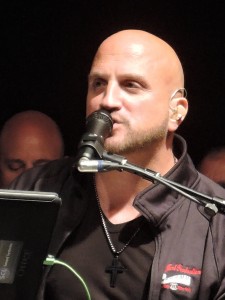 Mike DelGuidice has been a member of Billy Joel’s touring band since 2013.
(Photo by Mike Morsch)

But not this time, not when Mike DelGuidice and Big Shot are within shouting distance. And kudos the Ambler Arts and Music Festival braintrust for being savvy enough to recognize that Ambler loved this artist and band the first time they were here.  Bringing them back this year was a no-brainer and if the Ambler poohbahs are smart, they’ve already booked the band for next year.

DelGuidice, a Long Islander like Joel, is the real deal. He still tours with Joel all over the U.S. and world in major arenas and appears with Joel every month at Madison Square Garden in New York. When he’s not doing that, DelGuidice and Big Shot tour the U.S. themselves, bringing Joel’s music to places like Ambler.

I had this ridiculous thought on the way to the show: What if Billy Joel decided to make an unbilled, surprise walk-on guest appearance with DelGuidice and Big Shot that night? But I quickly dismissed such tomfoolery. The odds of Billy Joel showing up at a local street festival in on a Friday night were lower than Mr. Blutarsky’s grade point average.

But we didn’t need Billy Joel. Mike DelGudice and Big Shot are very, very good wth Billy Joel covers. For me, though, the highlights of the Ambler show weren’t the Joel tunes.

DelGudice inserted one of his original songs into the setlist called “Mona Lisa” that is absolutely brilliant. Check out the video online (starring actor-comedian Kevin James of “The King of Queens” fame), which is equally as brilliant. (Shameless Promotion Alert: Buy the CD, download the album, support this artist.) 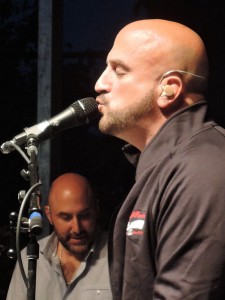 Mike DelGuidice included one of his songs, “Mona Lisa,” in the setlist for this show.
(Photo by Mike Morsch)

The other highlight for me was DelGuidice’s cover of Aerosmith’s “Dream On,” written by Steve Tyler for the band’s 1973 self-titled debut album “Aerosmith.” I had decided to leave the comfort of my lawn chair and go down to stand in the pit in front of the stage when the band played “Dream On.” It was loud, it rocked and I didn’t fracture a hip while dancing to it. All positive things, by the way.

The only blemish on an otherwise perfect show — and this is personal and not indicative of the overall performance itself — is that DelGudice and the band ended the evening with a Led Zeppelin song. I am not a Led Zeppelin fan at all. I didn’t like its music growing up in the 1970s — “Stairway to Heaven” is the worst make-out song in the history of make-out songs — and I don’t like it now. In fact, I’m not even familiar enough with Zeppelin’s catalog to report the title of the song that ended the show. Not that DelGuidice and Big Shot didn’t perform it superbly, they did. But that’s the song I can’t identify that I was humming to myself on the way to the car. Thanks, Mike.

The bottom line, though: Go see Mike DelGuidice and Big Shot. Support the music. And support your local music festivals.