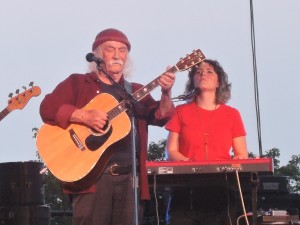 Crosby — politically active throughout his career — and his Sky Trails Band then offered a spirited version of CSN&Y’s “Ohio,” a protest song and counterculture anthem about the Kent State shootings May 4, 1970. Four unarmed students were killed by Ohio National Guard soldiers during a campus protest against the bombing of Cambodia by the U.S.

Young saw photos of the incident in Life magazine and decided to write the lyrics to “Ohio.” CSN&Y recorded the song at Record Plant Studios on May 21, 1970. It was released as a single in June 1970, but was banned from some AM radio stations because of the challenge to the Nixon administration in the lyrics.

The crowd in Pennsauken — which included a fair amount of old hippies, although somewhat surprisingly I didn’t smell any weed — obliged Crosby and sang “Ohio” really loud, the culmination of a performance by Crosby and his band that showed that the 77-year-old rocker has still got it and can bring it on any given night.

A founding member of The Byrds and Crosby, Stills and Nash — both groups are in the Rock and Roll Hall of Fame — Crosby co-wrote “Eight Miles High” for The Byrds as well as “Wooden Ships” for CS&N, both of which we heard Saturday night, among many of his other hits.

He may look like an old hippie himself, with his long, white hair and his droopy drawers that would fall right off if it weren’t for suspenders, but Crosby’s voice is still strong. Our rock royalty heroes are getting old — we are, too, along with them — and some of them don’t have the vocal command they once had.

Crosby isn’t one of those. He’s still got the pipes, has  surrounded himself with brilliant musicians, including his son James Raymond, and still puts emotion into the old songs as well as freshness into his new songs. 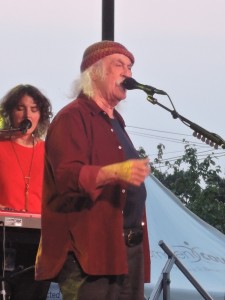 David Crosby has been indicted into the Rock and Roll Hall of Fame as a member of two bands — The Byrds and Crosby, Still & Nash.
(Photo by Mike Morsch)

He has admitted in the past to being brash, and he’s still got a touch of that, although he copped to being just “silly” these days to the New Jersey crowd. Reports are that Stills, Nash and Young don’t speak to him now, which might not seem all that unusual for a group that has had several internal dust-ups over the years. But Croz was humble on this evening and seemed to genuinely appreciate that the crowd had come out to see him.

As an aside, if you frequent Twitter, you can follow Crosby and maybe even have an exchange with him. He does engage his fans on that social platform, but be forewarned: He doesn’t suffer fools easily. If you ask him a legit question, you likely will get an answer, albeit short and sweet. Likewise, if you tweet something stupid, he’ll call you out. I’ve had a couple of music-related exchanges with him and have managed to stay out of his doghouse.

And kudos to Camden County for kicking off its summer concert series by bringing in a big name. You don’t often see a top tier artist like Crosby for free. Camden County must have shelled out a keg of gold for this show, but it appeared to be greatly appreciated by those in attendance.

There are few things better than sitting out in a nice park, on a perfect summer evening, and watching one of our generation’s musical icons. 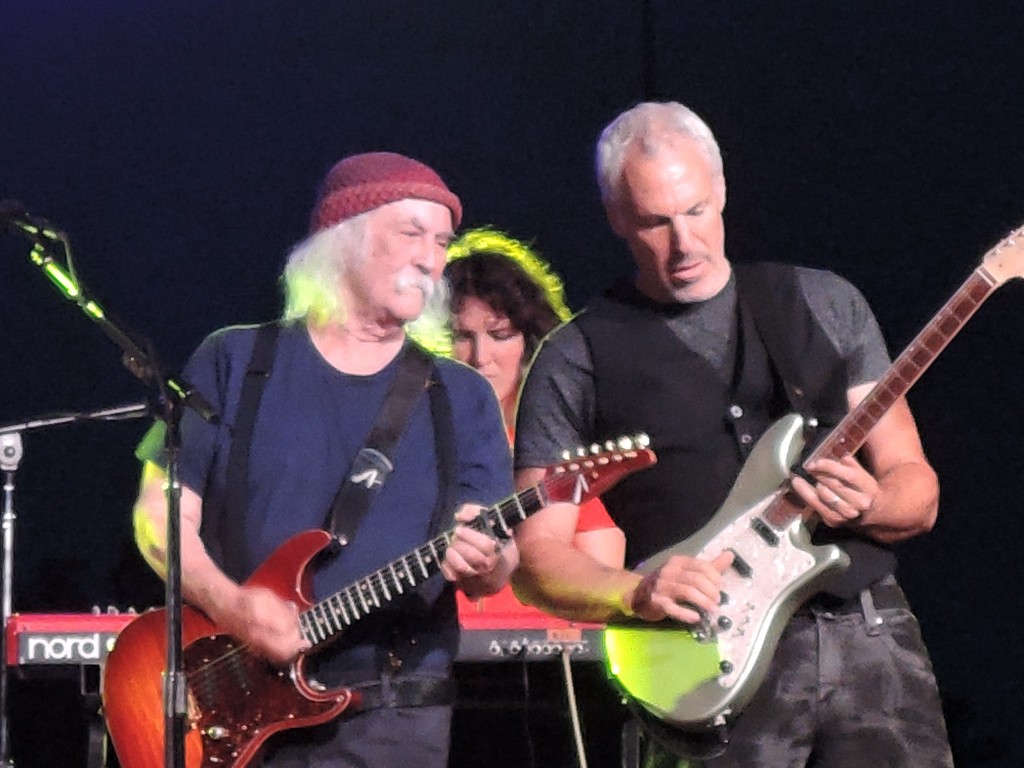