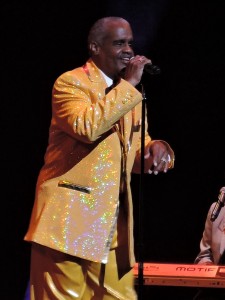 Russell Thompkins Jr., the original lead singer of The Stylistics, performed at the Festival of Soul Nov. 25, 2016, at the New Jersey Performing Arts Center in Newark, N.J.
(Photo by Mike Morsch)

It was pretty exciting when my dad got me a cassette tape recorder and a handful of blank tapes. Given the audio technology of the times, my plan in 1972 as a 13-year-old eighth-grader was to record my favorite songs off the radio onto the blank tapes and create my own music library.

Recording songs off the radio wasn’t an exact science. Growing up in central Illinois, I was listening to WLS out of Chicago. If the disc jockey didn’t give the listeners an advance heads up as to what songs were going to be played, one had to be able to recognize a song from the first fews notes, then simultaneously push “play” and “record” on the recorder.

I wasn’t very good at that. And I didn’t want to start the tape during the commercials because I didn’t want the ads messing up my music. Thus, I had entire tapes of songs that were missing the first few notes and/or words because I just wasn’t quick enough on the play/record draw.

That was frustrating. Certainly I could have gone out and bought the records or 8-track tapes, but with no means of income, that wasn’t a possibility. (You’d think that someone who ended up being a career newspaperman might have started out with a newspaper route, but I didn’t have that much ambition then.)

The one song that I wanted to have a full and pristine copy of was “I’m Stone in Love With You” by The Stylistics. I was enamored with that song and the beautiful falsetto voice of the group’s lead singer, Russell Thompkins Jr.

I didn’t know it at the time – and of course I could not have anticipated at such a young age that I would someday move to suburban Philadelphia – but The Stylistics were one of the groups that were helping establish what we now know as Philly soul, or TSOP – The Sound of Philadelphia – in the early 1970s.

Russell Thompkins Jr. and The New Stylistics performed at the Festival of Soul.
(Photo by Mike Morsch)

But I became a fan of The Stylistics and their songs. And what great songs they are: “You Are Everything,” “Betcha By Golly, Wow,” “Break Up to Make Up,” “Rockin’ Roll Baby” and “You Make Me Feel Brand New.” All written or co-written by the great songwriting team of Thom Bell and Linda Creed.

When I began writing The Vinyl Dialogues series, I wanted The Stylistics – and in particular the voice on all those great songs, Russell Thompkins Jr. – to be included. But through the first three volumes, I couldn’t make connections with Mr. Thompkins for an interview.

The opportunity to interview him finally presented itself with the Festival of Soul, scheduled for Nov. 25, 2016, at the New Jersey Performing Arts Center in Newark, N.J. In addition to The Stylistics, the show featured other early Philly soul artists Ted Wizard Mills, original lead singer of Blue Magic, and Harold Melvin’s Blue Notes as well as The Dramatics featuring LJ Reynolds and the Jones Girls featuring Shirley Jones. (The NJPAC is an absolutely first-rate concert venue, by the way.)

And what a great interview it was. Mr. Thompkins was gracious with his time and storytelling. I got a lot of historical background information for a chapter in the next volume of The Vinyl Dialogues.

Mr. Thompkins shared the story of the making of the group’s self-titled debut album, released in 1971, which included the hits “Betcha By Golly, Wow” and “You Are Everything.” The stories behind those songs, the making of that album and the early days of creating The Sound of Philadelphia that Mr. Thompkins shared are fascinating and will make for a detailed chapter in The Vinyl Dialogues Volume IV. 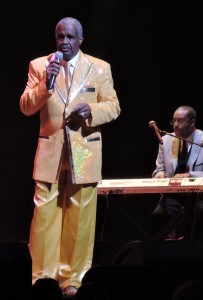 And the Festival of Soul concert itself was fabulous. It was the first time I had the opportunity to see The Stylistics live. Mr. Thompkins is the only original member in the group that’s now billed as Russell Tompkins Jr. and The New Stylistics. (There is another group that still performs as The Stylistics that includes original members Airrion Love and Herb Murrell.)

And it was fabulous. I had waited a long time to hear Mr. Thompkins sing all those Stylistics hits – from the opening note, which was very much unlike all those incomplete songs I recorded on those cassette tapes I made when I was a kid.

When he broke into the opening verses of “I’m Stone in Love With You,” it took me right back to 1972 and the radio in my bedroom, me waiting with my fingers on “play” and “record” of the tape recorder hoping the get the entire song.

It was worth the wait. And it was worth reliving the wonderful memory.

Paul Anka capable and comfortable being the ‘Keeper of the Cool’