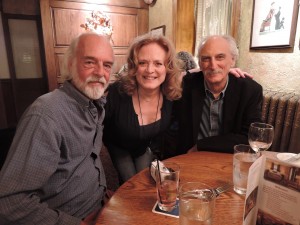 In their stage show, Michael Brewer and Tom Shipley are fond of telling audiences that they’re the only guys on the planet – “and probably in the universe” – who have written a song that has been performed both on the Lawrence Welk Show and by the late Jerry Garcia of the Grateful Dead.

That song, “One Toke Over the Line,” first recorded by Brewer and Shipley in 1970 and featured on the duo’s third studio album “Tarkio,” became an interesting and unique bit of pop culture. It got the attention of the Nixon administration, which labeled the singer-songwriters subversives to American youth because the song contained a drug reference in its lyrics.

But because it was a hit single, the song also attracted the attention of Lawrence Welk, who liked to feature popular songs of the day sung by Welk Musical Family singers on his weekly television show. In 1971, singers Gail Farrell and Dick Dale performed “One Toke Over the Line” on the show. And after the song, Welk is seen on camera saying, “There you heard a modern spiritual by Gail and Dale.”

That was more than 45 years ago. And now, the paths of Brewer and Shipley have once again crossed with the stars of the Lawrence Welk Show and one of the most unusual bits of music history from the 1970s now has an epilogue. 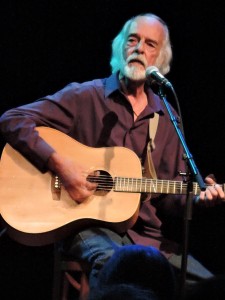 Michael Brewer on stage at the Sellersville Theatre 1894.
(Photo by Mike Morsch)

Here is how it happened.

I had interviewed both Brewer and Shipley in 2013 for Volume I of The Vinyl Dialogues about the the “Tarkio” album. During those conversations, they both said they had searched for years for a copy of the Welk show performance of “One Toke Over the Line, finally locating it in the mid-2000s. Shipley posted the video on YouTube and it got viewed by hundreds of thousands of people. Many viewers also offered their comments on the video.

The question I had, and apparently others have had for many years now, is did the Welk singers, perceived as squeaky-clean, know that they were singing a song that had a drug reference in the lyrics?

I eventually tracked down one of the singers, Gail Farrell, living in California, and got her on the phone, where I proceeded to ask the question: What did you know and when did you know it?

But Gail wouldn’t give it up. And for good reason: She has written a one-woman play for herself, scheduled to open in April 2017, and the answer to the question is a big part of the show.

Although we had never met face-to-face, Gail and her husband Ron Anderson, also a Welk Show singer, and I stayed in touch via email.

So when I found out in September that Brewer and Shipley were performing in my area of suburban Philadelphia at the Sellersville Theatre 1894 in Sellersville, PA, on Nov. 2, 2016, I emailed Gail and Ron suggesting that they fly across the country and join me for the show. 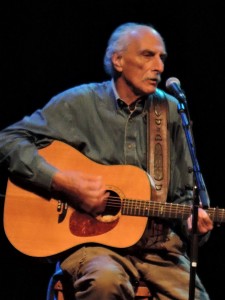 Tom Shipley on stage at the Sellersville Theatre 1894.
(Photo by Mike Morsch)

I was only joking. Gail and Ron, however, thought is was a great idea. They had never seen Brewer and Shipley perform live. They were coming to Pennsylvania.

Arrangements were made for Gail and Ron to meet Michael and Tom just after soundcheck on the day of the show. After about 15 minutes of pleasantries, Michael invited all of us to join him and Tom for dinner before the show.

What a great time that was. The artists all swapped stories about the music industry and I was privileged to just sit there and listen. Not many people get a chance to be a fly on the wall in a situation like that.

After nearly three hours of sitting around the dinner table, Brewer and Shipley had to go to work. When it got to the point of in the show where they sing “One Toke Over the Line,” Brewer told the story about the song being sung on the Lawrence Welk Show, a story he and Shipley have been telling for decades.

“Dale and Gail sang our song on the show. And low and behold, boy do we have a surprise and a treat for you tonight. In fact, we just had dinner with them. Gail and her husband Ron flew all the way from California just to be here tonight,” Brewer told the Sellersville audience. “Life is stranger than fiction. Gail is here. We had dinner with her and it was absolutely wonderful. We normally dedicate this song to Jerry (Garcia). But tonight, Gail, this one is for you.”

Gail and Ron got to spend a little more time with Michael and Tom during and after the post-show meet-and-greet. Back at the hotel after all the festivities, Gail was reflective. 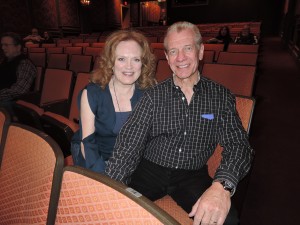 “I’ve read so much about them and heard ‘One Toke Over the Line’ so many times I almost don’t feel like it was the first time I heard it live. But I just was amazed at how much sound they got out of two guitars,” said Gail. “I was pleased and a little surprised because you never know how these things are gonna go. All they know about me is that I’m this little dorky goody-two-shoes wearing a little pinafore with a butterfly on it that all the YouTube commenters say should have been a marijuana leaf.”

Both she and Ron said there wasn’t any doubt that they were going to travel across the country to see Brewer and Shipley when the opportunity presented itself.

Oh, and as for the question of what Gail knew and when she knew it about “One Toke Over the Line” in 1971, well . . . we still don’t know for sure. They talked a lot about the whole thing at dinner, but neither Brewer nor Shipley directly asked Gail the question, at least not that I witnessed.

I guess we’re all just going to have to go see her one-woman show next year for the answer.