We called him “Mr. J.” and he was Chicago cool. One day after class he taught Mikki Milam and I how to do “The Hustle” dance. Her father, Jerry Milam, owned Golden Voice Recording Co. in South Pekin, Illinois, where the Head East album “Flat as a Pancake” was recorded in 1975. The making of that album was featured in Volume I of “The Vinyl Dialogues.”

After school was out that year, Mr. J. returned home to Chicago. Elton was our tour that summer and Chicago was one of the stops. My then 13-year-old sister was a big Elton John fan, particularly of the “Captain Fantastic and the Brown Dirt Cowboy” album that he released in 1975, and she got word that Elton was performing in Chicago – about a three-hour drive from where we lived.

Some of the details of that concert are now lost to history, but somehow, my dad worked it out with Mr. J. to get tickets to the show. So my dad, sister and I joined Mr. J. and his sister for the evening. 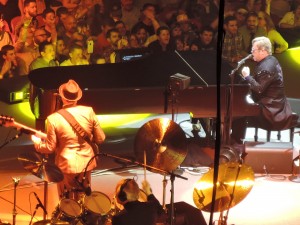 I only recall a few things about that show. Elton was still into all the funky costumes then, and he had several costume changes during the concert. We sat on folding chairs on the floor of the amphitheater, and toward the end of show, I recall seeing my dad, in his late 40s at the time, standing on his chair like the rest of us, rocking out with Elton. In my eyes, that made him as cool as Mr. J.

That was 40 years ago, and since then, I’ve seen Elton perform live in each of the past five decades, the most recent on Sept. 23, 2016, at the Giant Center in Hershey, PA.

In all of those concerts, I’ve never had what I would call a decent seat. They were all stadium concerts – a couple were with Elton and Billy Joel together – but I’ve never been close to the action on stage.

That changed at the Hershey concert. My wife – The Blonde Accountant – and I had tickets behind the stage. I actually had planned it that way. The Giant Center website has a virtual seating chart, one where you can get an actual online view from the seat itself. Knowing from past concerts that Elton always puts his piano at stage left, I selected seats behind to be stage right, so that we would be looking at Elton face-to-face from that vantage point. 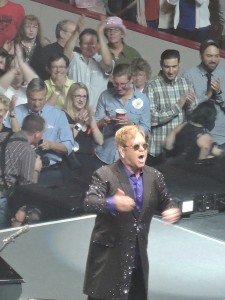 And it worked out beautifully. We were closer to the stage than we had ever been from those seats. And Elton did a great job of playing to and acknowledging the fans behind the stage without taking away from the majority of the crowd facing him. It was a unique perspectively, essentially looking over the shoulder of Elton’s longtime drummer, Nigel Olsson.

Elton played all the hits at Hershey. And he was at the top of his game. He seemed to genuinely be having fun and certainly the crowd was, too.

I didn’t get to hear a couple of my favorites, namely “Little Jeannie” and “Mona Lisas and Mad Hatters,” which weren’t in this set list, but that took nothing away from the show. Elton has such a vast catalog of hits and there’s nothing quite like hearing the Rocket Man sing “Rocket Man” and “Crocodile Rock” live.

Elton John is one of the greatest artists of our generation. He’s at the top of my bucket list to interview and is one of those performers that I’m glad to say I got a chance to see live. We’re fortunate to have grown up in the same era.

And it turned out that the best Elton concert experience I’ve had over the course of five decades would be from behind the stage.