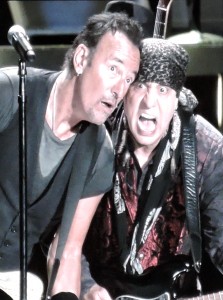 Who knew that farmers could predict the future of rock and roll?

When I moved into the dorms my first year at Iowa State University in Ames, Iowa, the guys who lived next door were enlightened and entertaining characters. Al Steinbach, a New Yorker with a dry wit, was studying engineering there in the middle of the Heartland. I’m not sure why he went all that way to do that. His roommate, Duane Morrison, was a rural gent from Grinnell, Iowa, who was studying farm management. That made more sense to me, since the university is surrounded by roughly a bazillion cornfields and two bazillion cows.

What made these guys cool to a youngster experiencing being away from home for the first time was that they had a turntable, a vinyl collection and an open-door policy. Anyone could drop in and listen to records at almost any time.

Duane was particularly taken with a relatively new artist at the time, one with whom I wasn’t familiar. One day he played the guy’s album for me, seeking my reaction.

“Well, whaddaya think?” he said to me after both sides of the record had been played. “Do you like it?”

“Yeah, it’s OK I guess,” I responded, without much enthusiasm.

“You’d better listen closely,” Duane said. “This guy is going to be a big deal some day.”

The artist was Bruce Springsteen and the album was “Born to Run” from 1975.

A mere 39 years after pooh-poohing the “Born to Run” album in the middle of Nowhere, Iowa, I was at Citizens Bank Ballpark in Philadelphia seeing Bruce Springsteen and the E Street Band live for the first time in my life. For the sake of posterity, the date was Sept. 7, 2016. 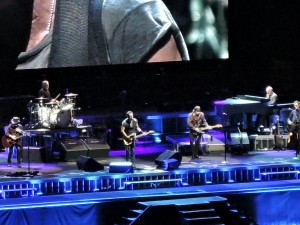 While I appreciate what Springsteen has given us with his music and concerts, I had never become a diehard fan over the years. The Blonde Accountant and I also aren’t big fans of stadium concerts, but we figured that if we were going to spend the money on one, it would be to see Springsteen, whom neither of us had seen in concert.

I had mentioned to her on the way to the show that Bruce’s music over the years hadn’t really spoken to me like some other artists, most notably the Beach Boys and co-founder Brian Wilson. Certainly that’s a subjective view. Music can evoke an emotional response within us, but it can be from different artists for different people.

We battled the crowds to get into the stadium that evening, and had just secured some ballpark and were trying to make our way to our seats in the 200 level, when the crowd got it’s first look at Springsteen. He hit the stage a little after 8 p.m. and the Philly crowd went crazy.

And Duane the farmboy was right. Bruce Springsteen is a really big deal now.

The Boss opened with “New York City Serenade,” featuring a beautiful string section. And there I stood, a tray full of chicken fingers and crab fries, at my first Bruce Springsteen concert . . . and I couldn’t contain my emotions. The music reached in and grabbed my soul, and I could feel my eyes well up with tears. It was an in-the-moment thing and it caught me off guard. And as I remember this concert in the years to come, that’s the feeling I want to remember. 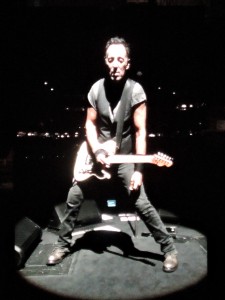 The rest of the night was what we’ve come to expect from Bruce these days. He doesn’t much care if it’s a work night or a school night, every night is a Friday night for Bruce and he seems happy to play well into the wee hours. He’s in a stretch of concerts now where he’s regularly hitting the four-hour mark. In fact, our show lasted 4:04 and is the longest show to date that’s he’s ever played in the U.S. My guess is that record won’t last long.

I don’t know how he does it. I’m 10 years younger than he is and I got tired just sitting there watching him. And I can’t imagine that E Street drummer Max Weinberg – dressed in a jacket and tie in the September Philly heat and humidity and banging away on the drum kit all night long – didn’t at some point think to himself, “Really Bruce? Four hours? I’m dying up here. C’mon, man.”

In a concert that was mostly all highlights for a first-timer, I was particularly pleased with “Rosalita (Come Out Tonight),” which I thought was outstanding. The crowd appeared to agree with me on that one.

The encore featured the tour debut of “Streets of Philadelphia,” (just for those of us in Philly, of course) “Jungleland,” “Born to Run,” “Dancing in the Dark,” “Tenth Avenue Freeze-Out,” a cover of the Isley Brothers’ “Shout” and “Bobby Jean.”

One of my favorite Springsteen songs is “Girls in Their Summer Clothes,” but I didn’t expect to hear that one because he hasn’t been playing it on this tour. But I can’t even call that a disappointment, given the quantity and quality in the show. 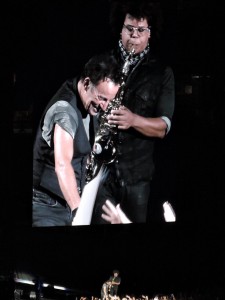 The Boss and Jake Clemons interact with the crowd.
(Photo by Mike Morsch)

Of course, many friends wanted to know what I thought after my first Springsteen show, and they may be surprised at my initial reaction. This will require some more thought and I reserve the right to change my mind at any time, but I don’t think I want to see another Bruce Springsteen concert.

Coming to the Springsteen bandwagon later in life has afforded me what I believe is a unique opportunity to have his entire catalog of music to explore and his live show to experience. It’s all fresh and new to me.

And to have that first concert experience be as close to perfect seems special. It’s like a baseball player hitting a home run in the last at bat of his career, circling the bases and running right off the field into retirement. It’s a perfect ending.

In my case, my first Bruce Springsteen concert was a perfect beginning and a perfect ending. And I’m not sure I want to ruin that story.