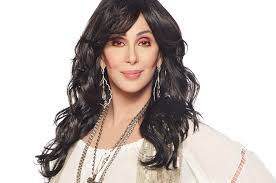 Cher nearly got knocked down by members of the Screen Actors Guild during a television broadcast in 1983.

This is a story about Cher almost being knocked on her keister in 1983. But to get there, I’ve got to first go through the rock-folk duo of Brewer and Shipley and the squeaky cleanness of the Lawrence Welk Show.

In Volume I of The Vinyl Dialogues, I had interviewed Michael Brewer and Tom Shipley about the making of their 1970 album “Tarkio.” The album would include what would become Brewer and Shipley’s biggest hit single, “One Toke Over the Line.”

“One Toke Over the Line” is a song about drugs. According to Shipley, before a gig in Kansas City, someone had given him a block of hashish and recommended he do two hits. But Shipley decided to do three hits, and by the time he got to the stage, he was wasted. “Jesus Michael, I’m one toke over the line,” Shipley said to Brewer.

Brewer thought that was hysterical, and right on the spot started singing, “One toke over the line, sweet Jesus, one toke over the line” before they went on stage that evening. The next day, they turned the line into a song, which they wrote only to give themselves and their friends a laugh.

When it came time to finish the “Tarkio” album, a suit at their record label – Kama Sutra Records – recommended that “One Toke Over the Line” go on the album. The song was released as a single and became a hit.

There was a wholesomeness about the Welk show, which featured a cast of highly talented artists and musicians who normally tried to stay current with the times, performing covers of songs that were popular. In 1971, that included “One Toke Over the Line.”

There is a YouTube video of the performance where singers Dick Dale and Gail Farrell performed “One Toke Over the Line,” after which Welk says, “There you heard a modern spiritual by Gail and Dale.”

Because the song had the word “Jesus” in it, Welk thought it was a spiritual song. He apparently didn’t have any idea it was a song about drugs.

That their song about being high was performed on such a family friendly show cracked up Brewer and Shipley.

“I was amazed, but at the same time I was also on the road and smoking a lot of pot, so I could believe just about anything,” said Shipley. 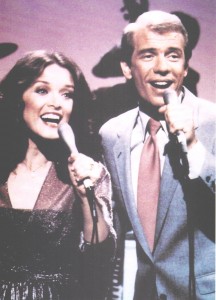 I eventually tracked down Gail Farrell, got her on the phone and asked just that: What did you know and when did you know it? She would have been 24 years old in 1971 and presumably hip to the social consciousness of the late 1960s and early 1970s.

Gail is a wonderfully talented singer and performer and we talked for about an hour. I cajoled her every which way I could as a journalist to get her to tell me if she knew she was singing about drugs when she and Dick Dale belted out “One Toke Over the Line” in front of the Welk faithful.

But she wouldn’t budge. And I understand why. She’s writing a one-woman show for herself and the answer to the “One Toke” question is an integral part of her show. She’s saving that reveal for herself, as it should be.

Gail and I have kept in touch via email over the past few years, and her husband Ron Anderson, also a Welk singer in the early 1980s, are both fans of The Vinyl Dialogues series, which I appreciate quite a lot. It was Gail who hooked me up with Welk singers Guy Hovis and Ralna English, who I interviewed for a chapter in The Vinyl Dialogues Volume II: Dropping the Needle.

But it’s Ron Anderson who is the bridge to Cher. Many artists are great storytellers and Ron is no exception. I’ve asked him questions about performing with the great composer and arranger Henry Mancini, and he has cheerfully shared his stories with me via email.

“Ask me sometime about Robert Redford, or Lucille Ball, or Jesse White, or Cher,” Ron wrote at the end of Mancini story email.

Cher? Yes, please. I’ll let Ron tell the story in his own words from here. He writes:

“It was 1983 and I was lucky enough to land a job as a ‘singer-who-can-move’ on the Screen Actors Guild (SAG) 50th Anniversary TV broadcast to be shot at the Shrine Auditorium in Los Angeles.
“It was a huge project with original music and lyrics composed for historical sketches presented throughout the program illustrating various milestone accomplishments achieved by the union in labor advances and disputes over the decades.  The cast was made up of tons of veteran and then-current film and TV stars, great character actors whose faces were instantly recognizable, and rank and file performers who, while not famous, were faithful dues-paying union members who maintained day-jobs in order to pursue their calling as actors.

“One of the biggest segments of the show was a full-blown production number expressing our pride in the union where nearly the entire cast was on stage, in several rows of about 20 people each, standing shoulder-to-shoulder with our SAG membership cards raised high while singing a specialty number titled, ‘Here’s My Card!’

“The next segment of the show (as I recall, it was a special award presentation to one of the founders of the union) was supposed to be a smooth segue from the ‘Here’s My Card!’ number right into the celebrity presenter’s speech.

“The challenge was this: How on earth could we get nearly 80 people off the stage in literally just a few seconds so the program could continue without stopping tape or taking a commercial break?

“The solution was this: We were all told to split our rows dead center and, on cue from the stage-left and stage-right stage managers, charge – yes, ‘charge’ – off stage while the cameras took shots of the audience giving their fully anticipated standing ovation to the ‘Here’s My Card!’ number.

“The day of the broadcast, we rehearsed the song and, especially our exit, several times on stage and the director was thrilled that it was working so well. For that number I was assigned to a position in the center of the very front row and was standing right next to Janet Leigh, who at age 56 was still a knockout!
I had several very nice conversations with her and found her to be engaging, charming and very funny.

“So it’s the night of the broadcast – packed house, tuxes and formals in full plumage, sketches, presentations, production going great, our performance energy level off the chart – and we come to the big finish of ‘Here’s My Card!’ The audience members are on their feet not just applauding, but cheering, too! The stage managers yell at the top of their voices, “Move!’ and we stampede right and left off the stage.

“Just off-stage-left, where I and my entire half of the group were headed, stood a lady waiting to make her entrance for the next segment. She sees this mass of humanity charging at her and does her best to get out of the way and protect herself from being trampled, but has no place to run.

“Now, I’m one of the very last to exit the stage but I don’t see the lady because there are nearly 40 people in front of me also trying to exit the stage. As I take my last couple of steps, I smash into this woman who is cowering in fear for her life and I grab her shoulders to keep her from falling down. As I steadied her and made sure she was safe I say, “Oh, I’m so sorry – I didn’t see you there.”

“To which this exotically beautiful woman with a husky alto voice smiles and says to me, ‘That’s okay – no problem’ and I suddenly realize that I have my hands on the shoulders of …Cher. She hears her cue and starts walking on-stage and as I’m walking farther off stage I’m thinking, ‘Anderson, do you realize what just happened?’”

Think about this: If I don’t interview Michael Brewer and Tom Shipley for The Vinyl Dialogues about an album of theirs that includes the song “One Toke Over the Line”; and if Gail Farrell isn’t one of the performers who sings that song on the Welk show; I never get to hear the story about another Welk artist, Ron Anderson, almost knocking Cher on her ass in 1983.

Man, I love a good story. And the road it takes to get there.