Paul Anka capable and comfortable being the ‘Keeper of the Cool’ 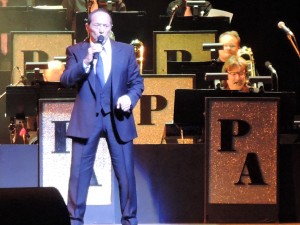 Paul Anka knows how to stand in front of a band during his Dec. 16, 2016, performance at the New Jersey Performing Arts Center in Newark.
(Photo by Mike Morsch)

Frank, Dean and Sammy would be proud. Anka is a professional, a showman and has always realized the importance of being a snappy dresser. At age 75, he still dances with the one that he brought and closes his show with “Diana,” a song he wrote as a teenager and recorded in 1957 that was a No. 1 hit in Canada, Australia, the United Kingdom and reached No. 2 on the U.S. Billboard Hot 100 Singles chart.

Certainly one’s level of cool is subjective in the eye of the observer. And this was my first time seeing Anka perform live. But here’s how cool he was at his Dec. 16 show at the New Jersey Performing Arts Center in Newark, N.J: he entered the venue through the back, walking down the aisle while singing “You Are My Destiny,” shaking hands and posing for pictures along the way; left the stage after the first handful of songs and went back into the crowd again, stood on one of the seats and sang a medley of his hits while fans crowded around him with their cell phones at the ready; when a lady in the audience named Theresa requested he sing a song in Italian that didn’t appear to be on the original setlist, Anka honored the request, then went off script, stopped the show and called Theresa down to the stage where the two of them proceeded to have a conversation like they were sitting in a living room chatting. 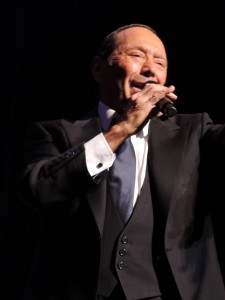 Oh, and he didn’t just sing. He played the piano, he played the guitar, he picked up the baton and directed the 14-piece backing band. He probably would have been willing to sell popcorn if somebody at the NJPAC would have asked him.

In an interview for a story to advance the show, Anka had said to me that the Rat Pack – Frank Sinatra, Dean Martin, Sammy Davis Jr., Peter Lawford and Joey Bishop, who had epitomized the La Vegas entertainment scene of the early 1960s – were as cool behind closed doors as they were in public.

“Us young guys, we all wanted to be cool like them. We wanted to dress like them. I wanted to stand in front of a band like them,” said Anka. “Oh, it was just amazing. They were the coolest to be around. It was everything that you could imagine.”

The Rat Packers are all gone now. But Anka is still around, and you know what, he’s learned how to stand in front of a band.

“(You’re) Having My Baby,” was one I wanted to hear Anka sing in concert because it’s on the album “Anka” from 1974. We spoke at length about the making of that album and the songs on it during our conversation and it will be featured in The Vinyl Dialogues Volume IV, due out in 2017.

Fans surround Paul Anka as he comes into the audience to sing.
(Photo by Mike Morsch)

Among the other highlights of the concert for me was Anka’s version – and beautiful arrangement – of Eric Clapton’s 1991 hit single, “Tears in Heaven”; his version of “It Doesn’t Matter Anymore,” which he wrote for Buddy Holly and which became the final song Holly recorded before his untimely death in a plane crash in February 1959, the day the music died; and his versions of “Oh Lonesome Me” by Don Gibson, “Bye Bye Love” by the Everly Brothers and the inclusion of a portion of “Purple Rain” by Prince into the middle of another song.

There was also a nice video tribute to Sammy Davis Jr. singing the Anka-written song, “I’m Not Anyone,” on which Anka accompanied on live vocals. It’s been part of Anka’s show for a while now, but for those who haven’t seen it live, it’s a special part of the performance. And cooler than cool.

One other observation: Anka appears to genuinely appreciate the attention of the fans. I was close enough to the stage when he sang the final song “Diana,” close enough to see the expression on his face as people reacted to that song. Several artists have told me during interviews that they can feel the positive vibes from the audience, and that they feed on that reaction.

It was apparent to me that the NJPAC audience loved Anka and he loved it back.

Anka and his music have remained relevant for seven decades, which to state the obvious, is no small accomplishment. And he’s the closest thing we have left to the legacy of the Sinatra Rat Pack.

Paul Anka seems quite capable and comfortable being the standard-bearer of that kind of cool. 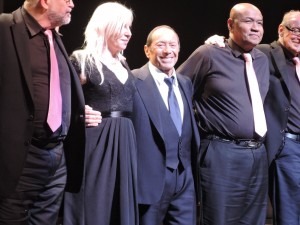 Paul Anka and his band take a bow after the show.
(Photo by Mike Morsch)