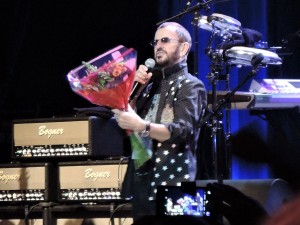 Ringo Starr admires the flowers given to him by a fan at his show Oct. 30, 2015, at the Tower Theater in suburban Philadelphia.
(Photo by Mike Morsch)

Before the show Friday night at the Tower Theater in Philadelphia, people were gravitating toward the stage to take pictures of Ringo Starr’s drum set.

It was the day before Halloween, but the only sign of that was a jack-o-lantern that was sitting on the riser alongside the drum set. On the pumpkin was an image of Ringo. I recognized it right away. It was the way Ringo was drawn for the Beatles Saturday morning cartoon series that ran on ABC from 1965 through 1969. It was one of my favorite cartoons as a kid and I watched it every Saturday.

The image on the pumpkin immediately reminded me of my childhood and a much simpler time. And it reminded me that it’s pretty universally agreed upon now that Ringo was in a pretty good band in the 1960s, a band that was big enough to have its own Saturday morning cartoon show, which happened to be the first weekly television series to feature animated versions of real, living people.

I never saw the Beatles perform live. My folks, who would have been in their 30s when the Beatles first became popular in the U.S., had a few of their 45 rpm records in the house. I recall listening to “I Want to Hold Your Hand” on the record player when I was about 6 or 7 years old. (“I Want to Hold Your Hand” was released in November 1963. “I Saw Her Standing There” was on the B-side.) 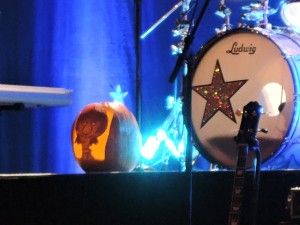 A jack-o-lantern featuring Ringo’s cartoon character sits next to his drum set.
(Photo by Mike Morsch)

Friday night in suburban Philly would be the first time I had ever seen one of the Beatles perform live.

Since 1989, Ringo has been performing with his All-Starr Band, and the Oct. 30 Philly stop would be the next-to-last show on the current tour. The first All-Starr Band members included Joe Walsh from the Eagles; Clarence Clemons and Nils Lofgren of the E Street Band; Dr. John; Billy Preston; Levon Helm and Rick Danko from The Band; Jim Keltner; and several guest artists, including Ringo’s son, Zac Starkey.

And man, was it a good show. Ringo was his charming, funny, peace-sign flashing self. Wearing a red jacket to start the show, he would change it midway through the set opting for a black jacket that had – what else – stars on it, he moved effortlessly across the stage as the frontman. Ringo is in his mid-70s, but he looks and has the energy of someone half his age.

He’s been doing this for a long time, so Ringo is very good at being Ringo. 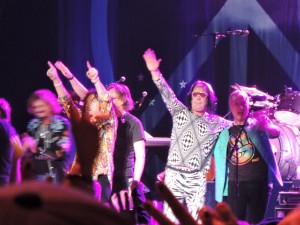 All-Starr band members, including Todd Rundgren and his funky concert attire, second from right, acknowledge the cheers of an appreciative crowd after the show.
(Photo by Mike Morsch)

But he’s also comfortable in his more familiar role, that of stepping back behind the drum set, banging away and letting his all-stars steal the show. Which they did.

All great songs, all performed flawlessly and all a pleasure to experience live.

But the highlight of the evening for me was Lukather absolutely kicking ass on Toto’s two huge hits from 1982: “Rosanna,” which reached No. 2; and on a chill-inducing performance of the No. 1 hit “Africa.” Simply outstanding. 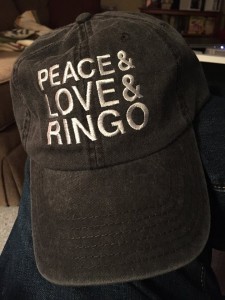 Some new headgear from the Ringo merchandise table.
(Photo by Mike Morsch)

These guys aren’t called all-stars for nothing. It was two hours of great music and entertainment.

The only oddity – and certainly this is a subjective opinion – was Rundgren’s wardrobe choice for the show. He was wearing an outfit that looked a lot like a test pattern, and it reminded me somewhat of The Riddler’s costume that actor Frank Gorshin wore on the 1960s television show “Batman.” It certainly was difficult not to notice it, which I assume is what Rundgren intended.

Everybody was feeling good on the way out of the show, and I wanted to grab something from the merchandise table to commemorate the evening. It’s not like Ringo needs my money, given the fact that he’s probably made a bazillion dollars in his career.

I settled for a $30 ballcap, on which the words “Peace & Love & Ringo” are stitched.

It’s a pretty cool hat and I like the message it conveys. I slapped it on my head as I walked to the car. It seemed like a perfect way to end the evening.