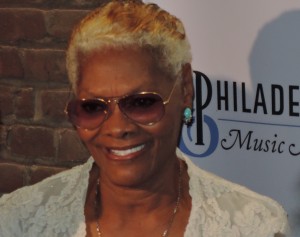 Dionne Warwick shared some memories of working with The Spinners on the No. 1 song “Then Came You” from 1974.
(Photo by Mike Morsch)

You gotta love Jerry Blavat, the iconic Philadelphia radio and television personality. The Geator with the Heater knows how to work a room. He has a great sense of style and a big smile that lasts a while.

Plus, he’s got a memory for faces. In particular, my face.

That’s how I got to meet Dionne Warwick. Jerry recognized my face and made the introduction.

The Boss With the Hot Sauce and Ms. Warwick were among the stars who attended the Philadelphia Music Alliance’s 2015 Walk of Fame gala Oct. 26 at the Fillmore Philadelphia, the city’s newest music venue.

The event, hosted by Saturday Night Live alum and Jersey boy Joe Piscopo, attracted some of the big names from the Philly music scene, including Kenny Gamble, who along with Leon Huff founded Philadelphia International Records in 1971 and created what we now know as “Philly soul” and “Sound of Philadelphia”; and 1960s teen idol and past Walk of Fame inductee Bobby Rydell.
I was part of the media contingent credentialed for the VIP cocktail reception prior to the induction ceremony, which offered photo and interview opportunities.

Ms. Warwick and Mr. Gamble were the two that I hoped to interview. While both easily could have their own chapters in the The Vinyl Dialogues Volume III – targeted for release in the summer of 2016 – the circumstances dictated that if I could get close enough to them with my recorder, I’d only have time for one or two questions.

Having already interviewed Walter Williams of The O’Jays and Henry Fambrough of The Spinners, I knew I could add some details to those chapters. Mr. Gamble and Mr. Huff co-produced The O’Jays breakthrough album “Back Stabbers” in 1972 and co-wrote the group’s biggest hit, “Love Train”; and Ms. Warwick had the only No. 1 single of her career in a duet with The Spinners on the Grammy-nominated song “Then Came You” in 1974. 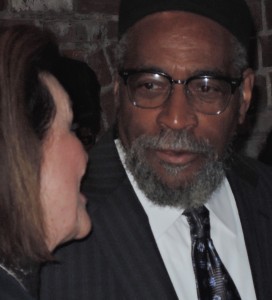 The Father of Philly Soul and co-founder of Philadelphia International Records, Kenny Gamble, co-produced The O’Jays breakthrough album “Back Stabbers” in 1972.
(Photo by Mike Morsch)

And that’s where Jerry Blavat came in. He was Ms. Warwick’s escort for the Walk of Fame evening. She was there to induct Billie Holiday and he was there to help induct Harvey Holiday.

I’ve met Jerry several times over the years, but more importantly in the context of this event, I had interviewed Jerry for the first book in “The Vinyl Dialogues” series. That interview was an analysis of the music of the 1970s and served as the epilog of the book.

“My man!” exclaimed Jerry as we met and shook hands, Ms. Warwick on his arm as the two of them made their way to the back of The Foundry, the upstairs reception room of the Fillmore Philadelphia, where there is some semi-private VIP seating. The area includes a handful of high-backed leather couches, each with a table, and curtains that can be drawn if VIPs desire more privacy. A railing separates the VIPs from the hoi polloi.

I had spotted Bunny Sigler off to the side and he was also someone I wanted to talk to. Mr. Sigler was the co-producer on The O’Jays’ “Back Stabbers” album and was not only a performer, but also one of Gamble and Huff’s best songwriters in the 1970s. He has three songwriting credits on the “Back Stabbers” album.

After I finished my six-minute interview with Mr. Sigler, I turned back toward the VIP seating section and noticed that nobody – public or press – had crowded around Ms. Warwick and Mr. Blavat. 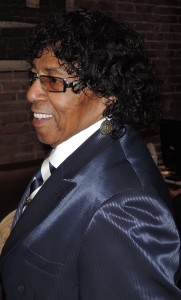 Walter “Bunny” Sigler was instrumental in the creation of the Philly Sound and wrote three of the songs that appeared on the “Back Stabbers” album by The O’Jays.
(Photo by Mike Morsch)

It was time to see if I could get an interview with Ms. Warwick. So I walked to the railing in front of the duo and leaned over.

He introduced to me to Ms. Warwick and I asked if I could ask her some questions about working with The Spinners.

“Go ahead and ask your questions,” said Ms. Warwick.

And I did, despite some pre-interview nervousness that caused my hands to shake a little bit while trying to turn on my digital recorder.

Ms. Warwick answered my questions and I got some quotes that will add historical background and perspective to the chapter on The Spinners that will appear in volume three of The Vinyl Dialogues.

I thanked Ms. Warwick and shook Jerry’s hand. He hit me with another “My man!” as I took my leave from the VIP section.

Looking down at the recorder, the entire exchange with Ms. Warwick took one minute and 10 seconds. It might be the shortest interview I’ve ever conducted. But I got what I wanted and the chapter on The Spinners will include even more personal recollections and perspectives from the artists who made the music.

Although I got several good photos of Mr. Gamble, I didn’t get to talk with him. I’ve been trying to get an interview for several years – I think the Philly International years in the 1970s are a fascinating and historically rich part of that decade of music – and this was the closest I had ever gotten to him. It didn’t happen this time, but I’ll keep trying.

But it was a successful evening of interviews and photo-taking that will enhance a couple of chapters in the next volume of “The Vinyl Dialogues.”

And on this night, it was Jerry Blavat who was “My man!”