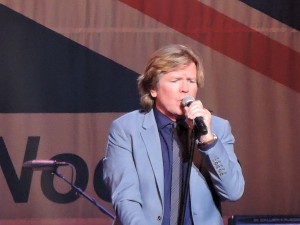 The incomparable Peter Noone of Herman’s Hermits closed the “Sixties Spectacular” show Oct. 10 at the State Theatre in New Brunswick, N.J.
(Photo by Mike Morsch)

A few songs into their set, “Yo” Vinny – the frontman and lead singer for The Bronx Wanderers – answered the question that many in the audience likely had been thinking: How do I get these kids to play songs from the 1960s?

On the surface, it seemed like a legitimate question. The Bronx Wanderers opened the “Sixties Spectacular” show Oct. 10 at the State Theatre in New Brunswick, N.J., that featured Gary Puckett and the Union Gap, Jay and The Americans and Peter Noone of Herman’s Hermits.

“Yo” Vinny – the elder statesman of the band – has surrounded himself with a group of twenty something musicians that includes his sons, Vin A. “The Kid” and Nicky “Stix,” and some of their friends. The group covers songs by Dion and Frankie Valli and the Four Seasons. 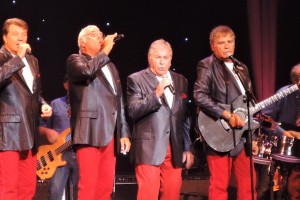 Jay and The Americans performed all their hits.
(Photo by Mike Morsch)

The way he got the “kids” to play the classic ’60s songs, he said, was that he suggested they learn to play a song from another generation that they could work into their set.

Then “Yo” Vinny stepped to the side, relegated himself to background vocals, and The Bronx Wanderers broke into their version of “Bohemian Rhapsody” by Queen.

And it absolutely kicked ass. It was as spot on as any band could cover any song. By the end of the tune, the crowd that was there to hear those great hits by those great bands from the 1960s was on its collective feet cheering the musicianship and showmanship of those “kids” doing a cover of a classic song from the 1970s.

When was the last time you’ve been to a concert and the opener got a standing ovation? 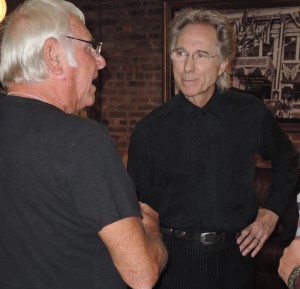 Gary Puckett, right, speaks with Sandy Deanne of Jay and The Americans before the show.
(Photo by Mike Morsch)

The great thing about the overall performance of The Bronx Wanderers was that it was only the beginning. The show got even better from there.

Gary Puckett and The Union Gap was up next, and they provided the smooth sounds of the band’s hits “Woman, Woman,” “Young Girl” and “Lady Willpower”; Jay and The Americans followed with all of their hits – supported visually by some great red pants worn by all the members; and Peter Noone from Herman’s Hermits closed the show, with the 67-year-old Noone dancing and moving around the stage like his undershorts were on fire. Noone is a fabulous singer and entertainer. We all should have that much energy at 67 years old.

Kudos to my friend Jim Anderson, one of the promoters of the show who was instrumental in setting me up to interview Sandy Deanne of Jay and the Americans, Noone and Puckett. Jim and his colleagues put on a first-rate show. If you didn’t leave the State Theatre thoroughly entertained and satisfied with that show, then you should check your pulse . . . you may be dead. 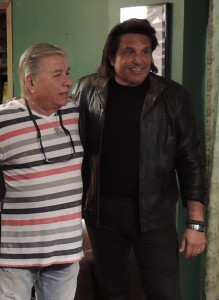 Howie Kane, left, of Jay and The Americans, greets “Yo” Vinny from The Bronx Wanderers before the show.
(Photo by Mike Morsch)

The other cool aspect of the evening was that the artists came out after their performances and spent time visiting and signing autographs for the fans. It was a scene right out of a Beatles news reel. There we were, those of us whose teen years are well in the rearview mirror, acting like teenagers and mobbing our musical heroes, the ones who provided the soundtracks of our lives, for pictures and autographs.

Lock up the giddy grandmothers, indeed. And the grandfathers, too.

The only band not to appear after its performance was The Bronx Wanderers. “Yo” Vinny had sent an apology through the event’s emcee that the band had to catch a plane for Chicago because it had a gig in the Windy City. (Editor’s note: Later word from “Yo” Vinny reveals that the band actually didn’t fly, but instead left as soon as their performance was over and drove through the night to Chicago, arriving Sunday afternoon.)

With all due respect to Peter Noone and Herman’s Hermits, it was evident that with this “Sixties Spectacular” show, something told me I was into something good.