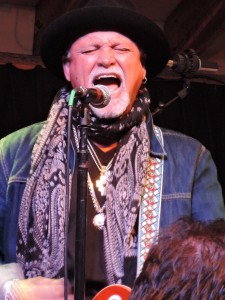 It was around around 3 a.m. on a Saturday in 1971, and Derek St. Holmes had just arrived home. The high school senior was in a band called “Scott,” and it had a Friday night gig that had kept him out late, something that his parents usually weren’t too happy about.

The St. Holmes family lived in Riverview, Michigan, known as “down river” from Detroit. St. Holmes’ sister, two years his senior, was off to college, which was a break for St. Holmes. Her bedroom was bigger than his, and when she left, Derek got to move into her room and claim it as his own.

On this night, though, his parents were asleep by the time St. Holmes got home. He got to his bedroom without waking them up, but he was still hyped up from the band’s performance.

So with his guitar in hand, he sat on the edge of his bed and started to write a song. He got out a piece of paper and a pen and started playing the guitar and writing the lyrics, trying hard not to wake his parents.

“The next day I ran it by the band to see how we could put it together and play it. And it sounded great,” said St. Holmes.

A few years later, in 1974, “Scott” had progressed to the point where the band opened for Ted Nugent and The Amboy Dukes. 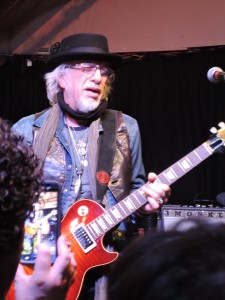 By late 1974, though, Nugent had tired of The Amboy Dukes. He decided to leave the band and start a new one, simply calling it The Ted Nugent Band. He would bring Dukes’ bassist Rob Grange with him, and eventually would add drummer Cliff Davies.

But Nugent still needed a vocalist and rhythm guitarist.
Because “Scott” had opened for Nugent, St. Holmes had on occasion hung out with Nugent, having dinner and kicking around Nugent’s Michigan farm.

That was enough to get St. Holmes a tryout and he impressed Nugent sufficiently enough to be offered a job as lead singer and rhythm guitarist for the band.

And then it was time to make an album.

The self-titled “Ted Nugent” album was the new band’s first effort. It would be recorded at The Sound Pit in downtown Atlanta, Georgia.

Although that first album had Nugent’s heavy footprint on it, there is one song that was written, arranged and performed by St. Holmes on the album, and for which he gets all the credit. It’s called “Hey Baby,” and it is the song that St. Holmes wrote in his bedroom at 3 a.m. that Saturday morning in 1971 when he was a senior in high school and still living in his parents’ house in Riverview, Michigan.

The “Ted Nugent” album, released in September 1975, reached No. 28 on the Billboard 200 album charts in 1976. “Hey Baby” was the only single from the album to chart, checking in at No. 72 on the Billboard Hot 100 singles chart. The album would go on to be a double-platinum album in the United States and a gold album in Canada. 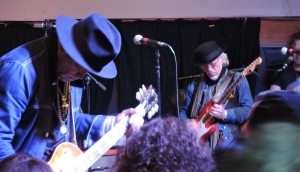 Derek St. Holmes and Brad Whitford made their first album together nearly 35 years ago. Now they’ve got a new album out called “Reunion.”
(Photo by Mike Morsch)

St. Holmes had shared that story with me during an interview to preview an appearance by Whitford St. Holmes Nov. 22 at Havana in New Hope, PA.

The thing I like about those kinds of backs stories is knowing them before a performance, then listening to the songwriter/artist perform the song live.

That’s what happened Sunday night. Brad Whitford, guitarist for Aerosmith, and St. Holmes have recorded a new album called “Reunion” and were at the tail end of a 10-show tour through the upper Midwest and Northeast that had started Nov. 12.

And when Derek St. Holmes played “Hey Baby” live at Havana New Hope, it . . . was . . . just . . . that . . . cool. That song is nearly 45 years old, the album on which it appears celebrated its 40th anniversary this year, and St. Holmes rocks it with an enthusiasm like he just wrote it yesterday.

The concert itself blew the doors off Havana. I don’t think that was a surprise at all for anyone who was there. Aerosmith and Ted Nugent have blown the doors off a lot of venues over the years. Whitford and St. Holmes grew up with arena rock, so they’re quite skilled at it. Expectations for the show were met and exceeded. 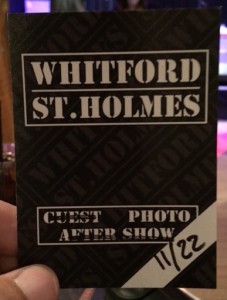 My ears were still ringing the next day. As it should be with these artists. If you get a chance to see Whitford St. Holmes, do it. And check out the new album.

And if you live within driving distance of New Hope, PA, check out Havana. It’s a great venue for a show, and entertainment manager Dave Maida is a real music guy and a class act. He knows how to book a show for his venue and he knows how to take care of his customers.

A special shoutout to the wait staff and the kitchen. I’ve been to Havana a handful of times now. The food is excellent and the service is top notch.

Besides, my ears should be back to normal in a few days.

In the spirit of ELO, The Orchestra offers some not-so-strange magic of its own