In the spirit of ELO, The Orchestra offers some not-so-strange magic of its own

ELO violinist Mik Kaminski, with his trademark blue violin, rocks with guitarist Parthenon Huxley at a concert by The Orchestra Jan. 2 at Resorts Casino Hotel in Atlantic City.
(Photo by Mike Morsch)

One can get a pretty good critique of a concert in the men’s room immediately after the show. This is particularly true of bands that have been around for decades because generally, the crowds tend to be older and nature has a way of catching up with all of us at some point. Especially if we’ve had a few cocktails before and during the show.

Such was the case Jan. 2 at a concert by The Orchestra at Resorts Casino Hotel in Atlantic City. As I was leaving the men’s room, another gent was staring at the wall, saying to all within earshot: “When they broke into ‘Telephone Line,” it was like I was back in my bedroom as a kid, listening to records.”

As much as I wanted to, I resisted the urge to answer, “Dude, that’s what The Vinyl Dialogues series is all about. The back stories behind the songs and albums that made up the soundtrack of our lives.” That’s because passing out business cards and promoting one’s books in a men’s room is probably not the most effective marketing approach.

The Orchestra is the evolution of what was once the Electric Light Orchestra. From 1972 through 1986, ELO had 27 Top 40 hit singles in the United States and United Kingdom. Jeff Lynne, the band’s co-founder along with guitarist Roy Wood and drummer Bev Bevan, wrote and arranged the group’s original songs and produced all of its albums. 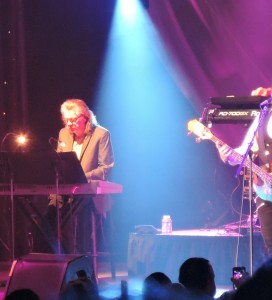 A little electric light shines down on Lou Clark, conductor and string arranger on some of the biggest ELO albums, during a concert by The Orchestra Jan. 2.
(Photo by Mike Morsch)

ELO Part II lasted until 1999 when Bevan left the group after a performance at the Sands Hotel in Atlantic City. The remaining members decided to continue as The Orchestra and have been performing as such ever since. Today’s lineup includes Clark and Kaminiski from the original ELO, Troyer and guitarist Parthenon Huxley from ELO Part II, former Styx guitarist Glen Burtnik and drummer Gordon Townsend.

Although Jeff Lynne released a new album, “Alone in the Universe” just a few months ago, in November 2015, under the band name Jeff Lynne’s ELO, Saturday night belonged to The Orchestra.

I have friends who will say that it’s not ELO if Lynne isn’t in the band. But really, how many bands from the 1970s still have the same lineup? I’ve seen Hall & Oates, but I’ve also seen Daryl Hall without John Oates and John Oates without Daryl Hall. I’ve seen Brian Wilson with the Beach Boys and the Beach Boys without Brian Wilson. I’ve seen Ringo without John, Paul and George. It’s all good stuff to me.

For me, it’s about the music – and the spirit of the music. I’m not a critic, just a fan, and the men’s room commentator was right: When The Orchestra played all those great ELO songs, it reminded me of those times in my youth that were associated with those songs. 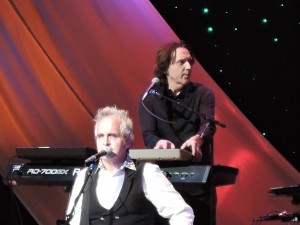 It was the first time I had seen a show at the Superstar Theater at Resorts Casino Hotel. Resorts itself is one of the oldest casinos in Atlantic City, opening in 1978. The first act in the 1,700-seat theater back then was Steve Lawrence and Eydie Gorme. Although its been renovated over the years, the theater still has cocktail tables in the middle of the seating area with those cool leather horseshoe banquette seats, like a lot of casino theaters had back in the day. I’m not sure if Frank, Dean and Sammy ever performed at Resorts, but it’s not difficult to imagine them having done so.

I always get a kick out of my generation at a classic rock concert these days. We might not be able to stand for an entire concert anymore, but we can still get up out of our seats and dance a bit. And The Orchestra had us up and dancing for much of the evening. My main concern when I get up to dance at a concert now is that I don’t pull a hamstring, strain a hip or throw out my back.

The Orchestra features experienced, professional musicians who know how to put on a good show. The Superstar Theater at Resorts is a good venue in which to see a show.

And The Orchestra didn’t. Quite the opposite, in fact.

Lost in the love of Air Supply for three decades