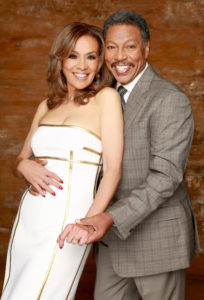 The cracks in musical cohesiveness among the members of The 5th Dimension were evident to the group’s members by the time they began work on the “Earthbound” album in 1975.

They had reunited with songwriter Jimmy Webb, who had penned the group’s first pop hit, “Up, Up and Away” in 1967. Webb was going to produce “Earthbound” and Marilyn McCoo and husband Billy Davis Jr. were both excited about working again with Webb.

But rehearsals were tense. Recording sessions were tense. At the center of the discomfort was the direction the band was heading by 1975.

Since the mid-1960s, the original five members – McCoo, Davis, Florence LaRue, Lamonte McLemore and Ron Townson – had produced a string of hits in addition to “Up, Up and Away,” including “Stoned Soul Picnic,” “Aquarius/Let The Sunshine In,” “Wedding Bell Blues,” “One Less Bell To Answer” and “(Last Night) I Didn’t Get To Sleep at All.”

But as the music of the 1970s continued to evolve, things were changing internally for The 5th Dimension.

“Part of the problem we were having inside the group was the discussion about do we continue to do the music the way we’ve been doing it and using the same formula?” said McCoo. “We saw the musical direction changing, and our music wasn’t clicking like it had before. Should we follow the market or do we stay where we are? And that was one of the conflicts that we were dealing with inside the group.”

A recent interview with Ms. McCoo and Mr. Davis revealed some of the backstory of “Earthbound,” which was to become the final album recorded with the original members of The 5th Dimension.

It was bonus information from McCoo and Davis, who would leave The Fifth Dimension and strike out on their own. In 1976, they recorded their debut album as a duo, “I Hope We Get To Love In Time” that featured the hit single, “You Don’t Have To Be A Star (To Be in My Show),” which earned them a Grammy Award for R&B Vocal Performance By A Duo or Group.

The making of “I Hope We Get To Love In Time” was the reason for the interview. That album will be a featured chapter in the book “The Vinyl Dialogues: Volume II,” scheduled for release in late spring/early summer 2015.

But the circumstances leading up to the making of that album included the fallout from the making of The 5th Dimension’s “Earthbound” album.

McCoo and Davis, who have been married for 45 years as of 2014, continue to perform today. They currently tour with a musical tribute to the hits and productions of their careers. Upcoming events scheduled include Oct. 17 in Century City, CA; Nov. 1 in Washington, D.C.; and Nov. 8 in Greeneville, TN. Go to www.mccoodavis.com for details on those and future appearances.

McCoo and Davis come off in an interview as quality individuals, loving and caring for each other, articulate and insightful. Their recollections of what happened nearly 40 years ago – with both the “Earthbound” album and the “I Hope We Get To Love In Time” album – are still pretty vivid.

Without giving away too much of what will be in The Vinyl Dialogues: Volume II chapter, the “Earthbound” experience is fascinating because McCoo and Davis both admit that they didn’t realize until many years later just how good the music is on that album.

The emotional toll it took to make the album clouded their ability to see it clearly as a superb piece of work at the time. If you’re not familiar with the album, seek it out either on vinyl – which is the preferred method here at The Vinyl Dialogues – or online and listen to it. Make sure to put headphones on and get the full effect. In addition to some Jimmy Webb tunes, there are other songs on the album written by John Lennon and Paul McCartney and Mick Jagger and Keith Richards.

“I thought Billy did some of his best work on ‘Earthbound.’ He did some amazing things on that album. It’s brilliant,” said McCoo. “Jimmy (Webb) will remember the difficulty of the project because of all the other stuff that was going on. But we have told him recently about how special we think the ‘Earthbound’ project was and still is and that it was a shame that it got caught up in everything else that was going on.”

Indeed, “Earthbound,” the group’s 12th studio album, was among The 5th Dimension’s worst-performing albums to that point, peaking at No. 136 on the Billboard Top 200. It did, however, do much better on the R&B chart reaching No. 30.

Still, the conflicts within the band overshadowed the music at the time for McCoo and Davis. And after the group did a tour in support of the album, the couple made the break.

“We wanted to do a lot more woodshedding and sharpening of our tunes instead of just continuing to go out and work all the time,” said Davis. “When you work with a group, it is an ongoing fight. But the whole thing is that it gets to a point where it gets out of hand. Then it gets frustrating.”

“At the end of it (‘Earthbound’), we kind of looked at each other and said, ‘Wow, are we going to go through another project like that again?’ We started thinking seriously about making a change,” said McCoo.

But they didn’t come to the conclusion that “Earthbound” was some of their best work until decades later.

“We had so much emotion mixed up in the music itself that we couldn’t even rationally listen to it. It was a disconnected artistic evaluation,” said McCoo. “What was going on as far as getting along or not getting along is nowhere to be found in the recording. Whatever we were experiencing during the making of it didn’t come across in the production.”

For a long time, Davis and McCoo thought “Earthbound” was some of their worst work. But with the benefit of nearly 40 years of hindsight and reflection, the album has turned out to be a hidden gem in the great catalog of The 5th Dimension.

Something that true professionals like Marilyn McCoo and Billy Davis Jr. aren’t afraid to admit now.