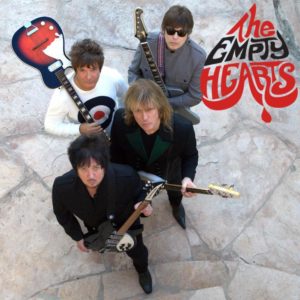 This isn’t the first time Elliot Easton has cut a debut album with a new band.

In late 1977, he spent 21 days in London where he took only a day-and-a-half to lay down all his lead guitar parts for the record. He and the rest of the band were staying in a beautiful rented house in the Mayfair District of central London, and when not in the AIR recording studio – an independent studio founded by Beatles producer Sir George Martin – Easton would explore the area.

The punk movement was going strong by that point, and all the young people roaming the local markets in and around London were wearing mohawks and dressing outrageously.

“The first thing I wanted to do was go to the marketplace,” said Easton. “They had these stalls where you could get custom-made boots and clothes. I wanted a pair of snakeskin boots like Brian Jones had.”

Jones, who had died in 1969, was one of the original founders of the Rolling Stones and one of Easton’s musical influences.

By the end of the three-week stay in London, Easton and his Boston-based bandmates – Ric Ocasek, Benjamin Orr, Greg Hawkes and David Robinson – had cut an album that many would come to consider a rock masterpiece, the self-titled “The Cars.” By late 1978, the album would be certified platinum.

Oh, and Easton got those snakeskin boots.

More than 35 years later, Easton has a new set of bandmates and they have recorded their first album. Billed as a “supergroup” consisting of Easton, drummer Clem Burke of Blondie, Wally Palmar of The Romantics on vocals, harmonica and guitar and bassist Andy Babiuk of The Chesterfield Kings, the group has just released its self-titled debut album “Empty Hearts.”

Now the band is ready to hit the road in support of the album, opening a tour that kicks off with four dates in the northeast – Oct. 16 in Londonderry, NH; Oct. 17 in Ardmore, PA; Oct. 18 in Brooklyn, NY; and Oct. 19 in Cranston, RI, before heading to Tokyo, Japan, Oct. 22-23 for four more shows.

And Easton is having just as much fun this time around as he did three-plus decades ago with The Cars.

“Andy (Babiuk) called me and asked if I wanted to play in a band with guys I liked and have fun playing the kind of music that reminded us of why we wanted to play music in the first place when we were young kids,” said Easton. “And I told him that sounded like a wonderful idea.”

The four got together in Babiuk’s studio in Rochester, NY, to write and record. They added another friend, Ian McLagan of Faces and Small Faces to help on keyboards, and a producer that they all knew, Ed Stasium.

And the end result came out great, according to Easton.

“We’ve all known each other for a long time and we’ve all liked each other. We just wanted to have a band without drama and just have fun. We’re not trying to change the world, we’re just trying to play music we love that’s good,” said Easton.

Choosing a band name presented a bit of a challenge, that is until another friend, Steven Van Zandt from the Rock and Roll Hall of Fame E Street Band, suggested “Empty Hearts,” chosen from his personal list of “secret” unused band names.

Van Zandt, along with his rock and roll pedigree, also starred as the consiglieri Silvio Dante in the long-running HBO series “The Sopranos.” And nobody in the “self-proclaimed band of rock and roll lifers” was going was going to disagree with Silvio Dante’s “suggestion” for the band’s name.

“There was no pressure. We all have nothing to prove. We’ve all had great careers and have a lot to be grateful for. So the only pressure is what we put on ourselves to just do good work,” said Easton.

“We’ve all made tons of records, we all know how it’s done, what to do. And we knew the kind of record we wanted to make. I think it was obvious to us that it wasn’t going to be one of those laboratory records. It was going to be a real rock and roll record with people playing off each other. So that’s what we’ve got.”

The band is now in rehearsals preparing to hit the road. Easton said the goal is to capture some of the fire of the band and translate that into the live shows.

“When the band is firing on all cylinders, it’s a really good band. It’s a raging band. We just want to get on the road and start rocking and having a good time with people,” said Easton.

For more information about the album and the tour schedule, visit www.theemptyhearts.com.