An original ticket stub from Game 1 of the 1959 World Series. This isn’t the exact ticket my Dad used to attend that game, but one that I purchased years later at a collectibles show.
(Photo by Mike Morsch) 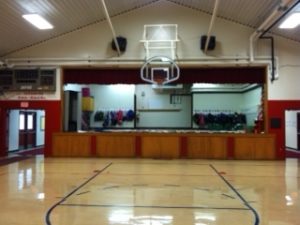 This is the stage at Rankin Grade School as it appears today. Leo’s TV sat in the middle of that stage in 1968 so students could watch World Series games between the Cardinals and the Tigers.
(Photo by Carole Delahunt)

Leo Woith was a running buddy of my dad’s back in the 1950s and 1960s. And the two of them provided me with a couple of my favorite World Series memories, even though one of those memories wasn’t actually a memory at all but a story because it happened before I was born and it’s part of family lore.

My dad was the superintendent of Rankin Grade School, a small rural school just south of Pekin, Illinois. The nameplate on his desk read a very official “E.E. Morsch,” but his close friends called him “Eddie.”

Leo was a local businessman who owned and operated Leo’s TV and Appliances in downtown Pekin. Leo’s kids attended Rankin – that’s how he and Dad knew each other – and as they became friends, they discovered that each shared a love of baseball. I recall going with Dad to Leo’s TV on Saturday mornings so he and Leo could shoot the breeze. I loved those trips because in addition to TVs and appliances, Leo also had “Heartland” baseball statues in the store and I was fascinated with those things.

Heartland figurines were hard plastic statues about eight or nine inches tall of the baseball stars of the past as well as of the early 1960s – Babe Ruth, Mickey Mantle, Ted Williams, Hank Aaron, Willie Mays, Stan Musial, Roger Maris, Warren Spahn, Nellie Fox, Luis Aparicio, Rocky Colavito, Yogi Berra. They originally were sold at the ballparks and at specialty stores for $1.98 and were marketed as toys and not the collectibles that they have become today.

I’m not sure sure how a TV and appliance store qualified as a “specialty” store for baseball figurines in those days, but Leo loved baseball and through his graciousness, I would often come home with one of those Heartland figurines.

This would have been around 1963 or 1964. But by then, the two friends had already established themselves as diehard baseball fans.

In 1959, the Chicago White Sox met the Los Angeles Dodgers in the World Series. Having grown up in central Illinois about three hours south of Chicago, our area boasted a lot of Cubs and White Sox fans, with Dad and Leo among their legions.

Leo had secured tickets to Games 1 and 2 of the 1959 World Series, which were to be played in Old Comiskey Park in Chicago, and he had invited Dad to go along. It was a big deal to have tickets to that World Series because it would be the first post-season appearance for the White Sox in 40 years, the team’s last one being in 1919, the same series that featured what became known as the infamous Black Sox Scandal.

The plan, according to Leo’s son Rick – who I recently had the pleasure of talking to so that we could compare notes on this story – was for the two friends to take the Rock Island Rocket train from Peoria to Chicago’s LaSalle Street Station. From there, they would head to the Palmer House Hotel where they were staying and get a cab to Comiskey Park.

But there was one catch threatening to upset the plan – my mom was pregnant and the original due date of the baby – me – was the last week of September. In those days, there weren’t any divisional playoffs, so the World Series started right after the end of the regular season, usually the first week in October. And all World Series games were day games then.

Dad was faced with a dilemma: Go to the first two games of the World Series with Leo, which would require the overnight stay in Chicago, or stay close to home for the impending birth of his son.

So this was a big decision. Despite his gruff exterior as a school superintendent, Dad was a sensitive guy underneath it all. He certainly was aware of the seriousness of the decision, but he also wanted to gather all the facts that he could ahead of time before making a final decision.

He and Mom consulted with Dr. Robert Gildersleeve Rhodes (that really was his name), the family doctor in charge of delivering the baby. Since Mom had already surpassed the late September due date, Dad wanted to know from Dr. Rhodes if my birth was imminent that first week in October.

The good doctor examined Mom and determined that, to the best of his medical expertise, nothing immediate seemed to be happening on the baby front. So he gave Dad the green light to head to Chicago with the instruction to call home every three hours to see if the situation had changed.

That was all Dad needed to hear. He called Leo and they headed to the south side of Chicago for the first two games of the World Series, on Oct. 1 and 2, with Dad calling home every three hours, at times from a pay phone at Comiskey Park.

The home team got off to a great start hammering the visitors 11-0 in the opener, but the Dodgers came back to take Game 2 by a score of 4-3, evening the series and sending it to Los Angeles for Games 3, 4 and 5.

As Dad and Leo left Comiskey Park after Game 2, they noticed a big billboard outside the stadium that caught their attention. It read, “Tickets to Games 3, 4 and 5 plus air fare to Los Angeles, all for $125.”

“What do you think Eddie, you want to go to Los Angeles for the next three games?” Leo said to Dad.

“Leo, my wife is pregnant and is due to give birth anytime, I can’t go to Los Angeles now,” said Dad.

I was born 17 days later on Oct. 19. In subsequent years of telling that story, Dad never let me forget that by coming along so late, I had beaten him out of going to those three World Series games in Los Angeles.

Nine years later, during the 1968 World Series, Dad and Leo got in cahoots once again for a post-season baseball scheme.

This time, it was the St. Louis Cardinals against the Detroit Tigers. Neither of the friends had a favorite team in the series, but that didn’t mean they still weren’t diehard baseball fans.

Dad had arranged with Leo to have a television brought to Rankin Grade School for the series. This was not a new thing for Leo to do, according to son Rick. Leo oftentimes provided TVs, not only for Dad’s school but also for the high school during the World Series.

It wasn’t just any TV out of Leo’s store that was going to be on loan, but one of those big console televisions that many of us had in our homes in the 1960s. It was a big piece of furniture. Only the best and most modern color TV was going to be provided because Leo was a guy who knew how to take care of his pals.

The TV was placed on the stage at the school, which was at one end of the gymnasium. This was before the advent of cable television, so along with the TV came a set of “rabbit ears,” a big antennae contraption that sat on top of the TV. The reception one got on the TV depended on which way the antennae arms were pointed to pick up the signal.

Dad had made the announcement to the students that anyone who wanted to stay indoors after lunch instead of going outside for recess could occupy one of the metal chairs he had set up on the gym floor and watch the World Series on Leo’s console TV.

Which of course was where the 9-year-old me was parked for every post-lunchtime recess for the duration of the 1968 World Series. I didn’t really care who won – I was a Pittsburgh Pirates fan at the time – but it was a ballgame on TV during the school day and that’s where I wanted to be, right in front of Leo’s TV. Plus, the sight of Dad constantly fiddling with those antenna arms trying to get the best reception was entertaining because he approached every task with a certain panache that I found amusing and endearing, even at 9 years old.

The funny thing about that series – and something I good-naturedly teased Dad about in subsequent years – was that after recess was over and the students had returned to their classrooms, Dad didn’t turn off the TV. It was left on the remainder of the school day for as long as the game lasted, and anyone who passed through the gymnasium for any reason could stop and catch a few moments of the game.

I know I took several breaks during those October afternoons in 1968, lollygagging from my third-grade classroom just off the gymnasium and across the tile floor to the boys restroom on the other side of the gym. And I’m pretty certain that Dad took several breaks away from his desk to patrol the building on official school business, always making sure to go through the gym on his rounds.

That’s the way things were in the much simpler times of the late 1960s. Something like that wouldn’t happen in schools these days.

It goes a long way toward explaining why I still watch the World Series now, even if my team isn’t playing for the title. It’s October baseball, and it’s a lifelong bond that I still share with my dad.

But he’s not around anymore. Neither is Leo. My sense, though, is if they were, they’d be finagling some way to watch the 2014 World Series unfold between the Royals and the Giants.

David Knopfler: On his own ship of dreams for 30 years