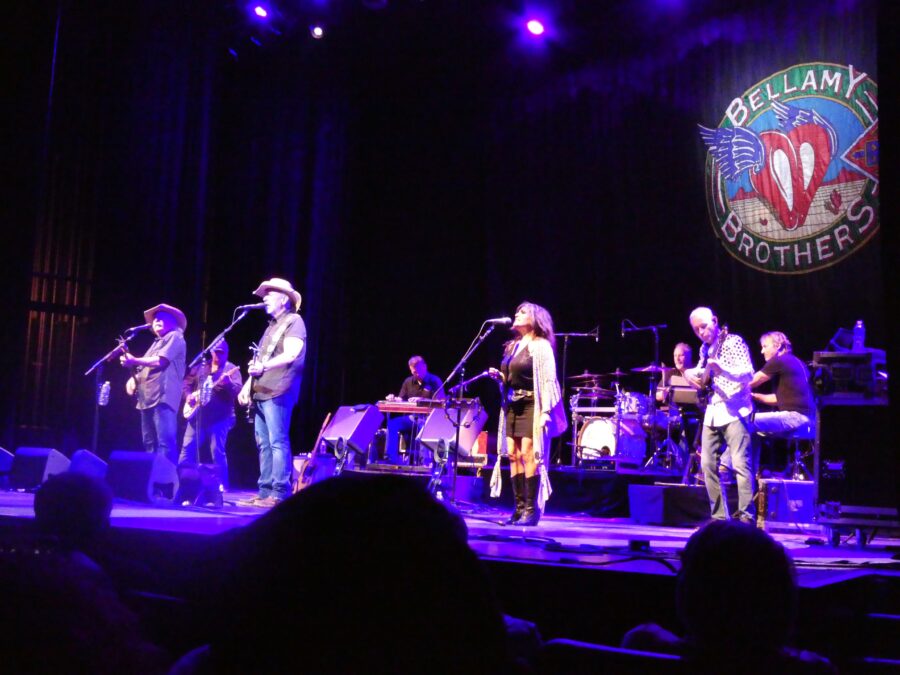 It’s been a while, but the love still flows from the Bellamy Brothers

There’s a reason for the sun-shining sky

And there’s a reason why I’m feeling so high

Must be the season

When that love light shines all around us

Every once in a while, I need a little yay-hoo in my yee-haw. Thanks to the Bellamy Brothers — Howard and David — that itch was scratched for the first time in quite a while.

It’s been 18 months since I (and the rest of the world) have had the opportunity to attend a concert at an indoor venue (thanks pandemic, you rat bastard) and that’s a long time to go without live music. But I finally got the chance Aug. 19, 2021, at the American Music Theater (AMT) in Lancaster, Pennsylvania. (By the way, if you’re anywhere near southeastern Pennsylvania, make it a point to see a show the the AMT. The seats are wide, the leg room is plentiful, the tickets are reasonably priced, there’s not a bad seat in the house and the ushers don’t bother non-intrusive picture-takers like me.)

Opening the evening was Gene Watson, whose career has included five number one hits, 21 Top 10 hits, and 48 charted singles. He is most famous for his 1975 hit “Love in the Hot Afternoon,” his 1981 No. 1 hit “Fourteen Carat Mind,” and his signature 1979 song “Farewell Party.”

There’s not much between-song banter between songs from Howard and David. Lucky for me, though, I’ve interviewed Howard for The Vinyl Dialogues series and he has shared with me the backstory behind “Let Your Love Flow.”

In the early 1970s, the Bellamy Brothers headed to Los Angeles, not knowing anybody. To make ends meet they worked local gigs and tried to get noticed enough to get a record contract.

In the meantime, they were hanging out with the artists in the Los Angeles music scene at the time — Bob Dylan, James Taylor, Van Morrison — as well as West Coast country rock groups like the Byrds and Poco.

Eventually, the brothers did get noticed and signed a deal with Warner Brothers Records/Curb Records in 1975. They also started sharing the stage with the likes of the Beach Boys, the Doobie Brothers and Loggins and Messina.

Among the early friends the brothers made in Los Angeles were a record producer named Phil Gernhard and members from Neil Diamond’s band, most notably Dennis St. John, Diamond’s drummer. A roadie for Diamond, Larry E. Williams, had written a song for Diamond, but the singer declined to record it.

Johnny Rivers, who had a string of hits in the 1960s, including “Secret Agent Man,” “Poor Side of Town” and “Baby I Need Your Lovin’,” and had followed that in the 1972 with another hit single, “Rockin’ Pneumonia and the Boogie Woogie Flu,” also passed on the Williams song.

St. John, however, thought it was perfect for the Bellamy Brothers.

“He [St. John] came over to our house one night and said he had a song that really sounded like something we would do. That’s just kind of how it happened,” said Howard Bellamy.

The song was “Let Your Love Flow.”

“And I thought it was the best song that I had ever heard,” said Bellamy.

The Bellamy Brothers did indeed decide to record the song, but they weren’t the first. Despite the fact that Diamond and Rivers had passed on “Let Your Love Flow,” not everybody did. Singer-songwriter Gene Cotton — who had four Top 40 hits between 1976 and 1978, including “You’re a Part of Me,” a duet with Kim Carnes — had recorded the song but had not secured the rights to it.

“We’d written most of our own songs, but this song just felt like our song when we heard it,” said Bellamy. “It’s so important to have the right marriage between a song and an artist and this one was just the song for us.”

But not everybody was as excited about the song, especially record company officials.

“We really had to push to get it out. I’m still surprised that we won out on that. We didn’t win many battles in those days. They [record company officials] really didn’t want us to record the song. They weren’t as hot over it as we were. But we kept on and kept on and finally we talked them into it.”

The persistence paid off. Not only did Curb Records officials relent and let the Bellamy Brothers record “Let Your Love Flow,” but the company also decided to release the song as a single.

“I was so pumped about the version that we had,” said Bellamy.

And his instinct was right. The song took off like a rocket, first in Europe, and then back around in the United States.

The Bellamy Brothers had a monster pop hit on their hands. And it had created a few more complications for them.

Were they a pop group or a country group?

As for an album, the Bellamy Brothers were nowhere ready to make one.

“It was like, oh my, we’ve got a monster record, what do we do now? The song had made such an impact, we had to scramble to put our career together to go with it,” said Bellamy. “In those days, singles were the big thing. You’d get these producers that put more emphasis on singles — and the situation that we were in was kind of that way. We were more album-oriented, but we were in a big head-butting situation with the label. We didn’t really agree with them on anything.”

Finally, though, the Bellamy Brothers’ debut album, also titled “Let Your Love Flow,” was completed in 1976.

“We got the other songs done, but we scrambled to do them. No one could imagine the battle we were going through with the record company at that time. It was unbelievable,” said Bellamy. “We were just two farm boys from Florida saying ‘What the hell have we gotten ourselves into?’ Thank goodness there were two of us. We just battled through it and somehow survived.”

Produced by their friend Gernhard, the album contained 10 songs, including the song “Inside of My Guitar,” co-written by David Bellamy and Jim Stafford that had been on the B side of the “Let Your Love Flow” single.

David and Howard wrote all the other songs on the album with the exception of one, “Satin Sheets,” the first song on the A side of the album written by Willis Alan Ramsey. In 1972, Ramsey wrote and recorded the song “Muskrat Candlelight,” covered in 1973 by the band America, which had a minor hit with it, and again in 1976 by The Captain & Tennille, both with the revised title “Muskrat Love.”

Still, the label didn’t know didn’t know what to do with “Let Your Love Flow.” In fact, one of the most popular songs of the era that followed “Let Your Love Flow” to the top of the Billboard Hot 100 singles chart in 1976 was “Disco Duck,” a satirical novelty dance song performed by radio personality Rick Dees & His Cast of Idiots.

“We didn’t start out as a country act, even though we were country. The people that we were involved with, they didn’t know what in the hell we were,” said Bellamy. “That was one of big problems. And people still don’t know what the devil we are. We’ve never fit into any particular mold.”

Over the course of their 40-plus-year career, Bellamy estimates that he and his brother have performed “Let Your Love Flow” more than 8,000 times onstage.

“One great thing about our careers — and there are a lot of great things, even though it’s been as crazy as anybody’s career how it happened — we have songs that have had long lives,” said Bellamy. “And people still get excited. When you go and do one-nighters with new faces, I can honesty say that singing ‘Let Your Love Flow’ has never gotten old.”

The song that crossed genres and connected generations