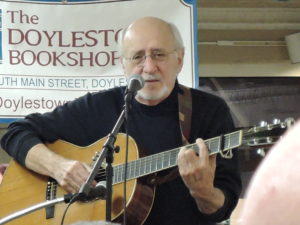 Peter Yarrow of Peter, Paul and Mary was at the Doylestown Bookshop on Nov. 10, 2014, to promote his new book, “Peter Paul and Mary: Fifty Years in Music and Life.”
(Photo by Mike Morsch)

As much as I like listening to my favorite artists on vinyl, I’ve got this thing about hearing and seeing them sing their signature songs live. It completes the musical experience for me and oftentimes touches me emotionally.

That’s part what music is about for me: to elicit that emotion.

I want to experience Brian Wilson and the Beach Boys singing “Surfer Girl” in person. And I have.

I want to experience Hall and Oates singing “She’s Gone.” And I have.

I want to experience Elton John singing “Rocket Man.” And I have.

I’d like to witness Bob Dylan singing “Blowin’ In The Wind.” The same goes for Bruce Springsteen singing “Born To Run.” I hope to experience both of those some day.

There’s a whole list of artists whose songs I enjoy. I’ve got the records. But I haven’t seen them all live.

Fortunately, I was able to cross another off the bucket list this week. I got to see and hear Peter Yarrow, of Peter, Paul and Mary, sing “Puff the Magic Dragon” and “Leaving on a Jet Plane.”

Yarrow was at the Doylestown Bookshop in Doylestown, PA, to promote his new book, “Peter Paul and Mary: Fifty Years in Music and Life.” He told stories, sang a handful of songs, signed books and spent time chatting with those in attendance.

Yarrow, along with Noel Paul Stookey and the late Mary Travers are folk music legends. They’ve always been about peace, love and social consciousness.

That hasn’t changed for Peter Yarrow. He’s still about all those things. And about community. That was evident in his Doylestown appearance. Those in attendance knew the words and sang along to “Puff, the Magic Dragon,” “Leaving on a Jet Plane” and “If I Had A Hammer.” We all shared in the Peter, Paul and Mary experience that has unfolded over the past 50 years.

Actually, “Leaving on a Jet Plane” – written by John Denver – is my favorite Peter, Paul and Mary song. That song resonates differently for people. For me, it reminds me that my baby girl is away at college in Iowa – 16 hours by car from Philadelphia – and that I only get to see her once a year. Mary Travers sang lead on that Peter, Paul and Mary song and she owned it. The song was the group’s biggest single and only No. 1 hit on the Billboard Hot 100 chart in the United States.

I was too young to see a Peter, Paul and Mary concert in the 1960s. But to hear Peter sing “Leaving on a Jet Plane” solo now was just as powerful for me as I sat there and listened to it.

It’s part of the musical experience. It’s personal. And it means a lot.

So after I got home from Peter’s book store appearance, I picked up the phone and called Iowa. Just to hear my daughter’s voice. And to complete a musical experience with Peter Yarrow.

A musical journey from Springsteen to ‘Springhouse Revival’

One night in Havana with The Empty Hearts: Just what I needed