One night in Havana with The Empty Hearts: Just what I needed 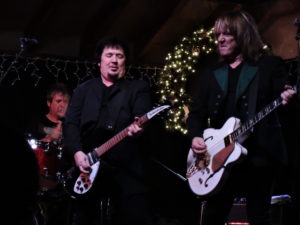 The Empty Hearts performed Dec. 3 at the Havana in New Hope, PA. From left, Clem Burke on drums, Wally Palmar on guitar and Andy Babiuk on bass.
(Photo by Mike Morsch)

The Havana – a restaurant, bar and music venue – is a hip place. In addition to sporting some top-notch pool tables – the kind of tables that attract players that bring their own customized cue sticks in custom made cases – it exudes a cool vibe.

It could be the orange couches. They may be leather, they may be naugahyde. Two of them face the stage, the other faces the the pool tables, which sit in front of big windows that offer a view of Main Street in New Hope, PA.

New Hope is a community of eclectic shops, restaurants and venues in a town that for decades has generally been regarded as the halfway point between Philly and New York City for the “in” crowd.

Havana has an outside bar and seating area that during the warm weather months is perfect for people-watching. But on a recent early December evening, all the action was inside. 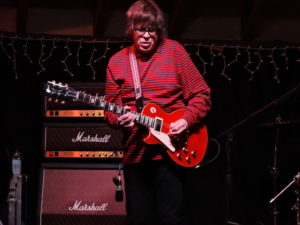 One might expect to walk into the Havana, look over and see a white-jacketed Humphrey Bogart, drink in hand, leaning on the bar welcoming you while “As Time Goes By” plays on the sound system.

The venue has hosted to some pretty big names, but enhancing its coolness on Wednesday, Dec. 3, 2014, was The Empty Hearts. A supergroup that includes Elliot Easton of The Cars, Clem Burke of Blondie, Wally Palmar of The Romantics and Andy Babiuk of The Chesterfield Kings, the band has been together for only about six months, but has already produced a self-titled album of kick-ass tunes and has toured both coasts and Japan.

The set Wednesday was 75 minutes of pure high-decibel rock music. You know the kind: The intimate venue where one can sit 15 feet from the stage, feel the drums and bass guitar thumping in your chest and sense the unruly eyebrow hairs that you forgot to groom properly before venturing out in public flapping from the big sound coming out of the speakers.

There isn’t a lot of in-between song banter by The Empty Hearts. The closest we got to that at this show was when Babiuk shouted across the stage to a momentarily perplexed Easton, “You’ve got the wrong set list!” And Easton replied, “Are you (bleepin’) kidding me!”

Otherwise, The Empty Hearts banged out song after song after song with an up-tempo high energy. These guys are seasoned professionals who are happy to spend time interacting and talking with fans after the performance. But while they’re on stage, it’s all in-your-face rock and roll.

The thing I liked about this show – and maybe this isn’t all that unusual for a supergroup whose members have already-established catalogues of hits – was that the new songs complemented the more familiar hits of their previous bands that were interspersed throughout the set. We got to hear all the songs on the new Empty Hearts album, which are really good. And in-between, we were treated to classics like “Good Times Roll” and “Just What I Needed” by The Cars, “What I Like About You” and “Talking in Your Sleep” by The Romantics and “One Way or Another” by Blondie.

For the price of a ticket and a CD, The Empty Hearts is one of the best values out there. Add to that the professional stage presence of the band members and the personable interaction they displayed after the show with fans, and I’m hard pressed to find a more reasonable and entertaining music experience. Check out the band and its upcoming concert dates at www.theemptyhearts.com.