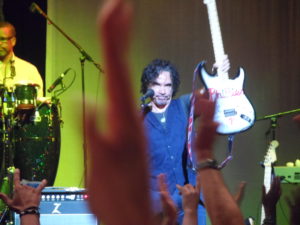 John Oates is comfortable coming home to Pennsylvania, especially when he performs solo gigs at the Sellersville Theater 1894.

As he is fond of saying when performing there, the theater holds a special place in his heart. It was where Oates, as a newly licensed driver in the mid-1960s, took a young lady from nearby Silverdale borough on his first car date to the venue to see a movie.

The locals will tell you that the intimate movie-theater-turned-concert venue has been the site of a lot of memorable moments ever since that Oates date.

And on Thursday night, Sept. 25, John Oates created another of those memories for himself. Six songs into his set, his drummer and bass player exited, leaving just Oates and his guitar on stage.

“I want to dedicate a song to my mom,” he said.

The Oates family is from North Wales, PA, in Montgomery County, the northwest suburbs of Philadelphia. A little further west in the county is where Daryl Hall grew up, just outside Pottstown, PA.

For years, at least at all the East Coast Hall & Oates shows that I’ve attended in Pennsylvania and New Jersey, John’s parents have been in the audience. They were there again in Sellersville Thursday evening.

Oates proceeded to relate a story about how when he was 5 or 6 years old, his mother had him perform at a local park, dressed to the nines in a red blazer. But the young Oates was more interested in getting some ice cream than he was in performing. In an effort to persuade her son to focus more on his song and less on the ice cream, Mrs. Oates insisted that the star of the show – a young Irish tenor by the name of Dennis Erickson – certainly was more interested in his music than he was ice cream and that John should be, too.

It was enough to do the trick, and John sang his song. It was the last time he sang that song until Thursday night.

The tune John dedicated to his mom was “Me and My Gal,” written in 1917 by George W. Meyer, Edgar Leslie and E. Ray Goetz. But it was Judy Garland and Gene Kelly who made it into a hit in the 1942 film of the same name.

And this is how music connects us. Not only did Oates create a special memory for himself and his mother, he created one for me as well.

Of the songs my mother used to sing to me as a toddler, the ones I remember are “Paper Doll” by the Mills Brothers. And “Me and My Gal” by Judy Garland and Gene Kelly.

But getting something special out of a John Oates solo concert isn’t at all unusual. As much as we all like the Hall & Oates concerts, they’re different than what Oates gives fans at a solo show. And different in this context is really good.

I love the Hall & Oates album “Abandoned Luncheonette” from 1973. In fact, interviews with Daryl and John about the making of that album were the inspiration for “The Vinyl Dialogues: Memorable albums of the 1970s as told by the artists.”

Oates solo shows do feature H&O classics, like “Maneater,” “Out of Touch” and “You Make My Dreams Come True,” but they’re Oates versions of those songs, with Oates vocals, Oates interpretations, Oates arrangements and Oates tempos.

In addition to great storytelling to set up each song, the set list Thursday night featured “Camellia” (another personal H&O favorite), more recent solo efforts from Oates’ albums “Mississippi Mile” and “Good Road to Follow,” as well as performances of “It’s All Right” by Curtis Mayfield, “Come Back Baby” by Lightnin’ Hopkins, “Little Queenie” by Chuck Berry and “Deep River Blues” by Doc Watson.

Fortunately, there was a whole lot of good at this show that overshadowed a bit of the not-so-good.

We’ve all been to concerts and sat next to people who don’t know how to keep quiet during the performance. And Thursday night it was my turn to sit next to not one, but three of them.

Since it was on Oates’ home turf, in addition to his parents, he had a lot of friends and acquaintances in the audience, including a crowd from Temple University where he went to college. Part of this trip home for Oates includes his being presented – along with Brian Williams of NBC News and others – the Lew Klein Excellence in Media Award from the university. Klein is a Philadelphia-area philanthropist and former television executive who hired Dick Clark to host American Bandstand. The ceremony was scheduled for the night after this particular show.

So it was no surprise that the three women who sat next to me claimed to have some kind of connection to the star. As they took their seats 15 minutes before the show, one of the women announced, “Where are you John? Your high school sweetheart is here.”

Apparently, in his early years, Oates dated mostly jibber-jabberers who thought that rock shows were supposed to start 15 minutes earlier than the 8 p.m. time printed on the ticket. And this woman wouldn’t quit talking through the entire show. That not only shows a lack or respect for the artist, it’s rude to the people in the immediately vicinity who paid to hear John Oates perform.

I’m guessing one of the reasons that she’s not Mrs. John Oates today because she wouldn’t shut up long enough for him to propose to her back in the 1960s.

Nevertheless, it was the only glitch in an otherwise stellar performance by the bona fide Rock and Roll Hall of Famer and all-around nice guy.

I even called my mom on the way home after the show and we sang a line or two of “Me and My Gal” together over the phone.

Thanks to John Oates and his music, I was reminded of a cherished childhood memory of my own. And no amount of jibber-jabber can overshadow that.