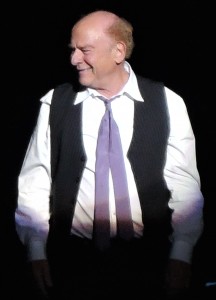 Art Garfunkel performed a solo show March 20, 2016, at McCarter Theatre on the campus of Princeton University.
(Photo by Mike Morsch)

When Judy was a little girl in the 1970s – maybe 10 years old or so – her parents used to take family camping trips. Judy’s dad had gotten a trailer that he hitched to the back of the family’s station wagon, and off they’d go, sometimes staying in their home state of Pennsylvania and sometimes venturing as far west as Illinois and Missouri.

Judy, a confessed girly girl, didn’t much like these camping trips. She preferred the comforts that civilization afforded her, which, among other things, included indoor plumbing. Judy was then, and is now, a big advocate of indoor plumbing, which puts her at odds with much of the camping experience.

It was on these trips that her father, equipped with 8-track players (who remembers those?) in both the station wagon and the trailer, subjected his family to his favorite music: Simon and Garfunkel.

“He played those tapes over and over again,” said Judy. “I knew the words to all those songs.”

That is not unlike the experience many of us had growing up, listening to our parents’ music. For me it was the 1960s and the Beach Boys, Elvis, The Association and The Young Rascals, among others.

But from the moment Art Garfunkel stepped on stage at McCarter Theatre Friday night on the campus of Princeton University, the memories of those long-ago camping trips came flooding back.

When Garfunkel broke into “The Boxer,” Judy could see her parents in the front seat of that station wagon, her dad in a flannel shirt and jeans – he never wore that type of shirt or blue jeans except on those trips – her mom in the passenger seat next to him, both bobbing their heads slightly to the music. When Garfunkel sang “Scarborough Fair,” Judy could see every detail of the inside of trailer, where she slept, and the small compartment where she stored the stuff that a 10-year-old city girl would take on a nasty old camping trip.

And what once were less than fond memories of camping trips from long ago were transformed into pleasant memories right there in McCarter Theatre, thanks to the sweet voice of Art Garfunkel singing “The Sound of Silence” and “Bridge Over Troubled Water.”

Judy’s mom passed a few years ago. Her dad – my father-in-law – is still around. He still listens to Simon and Garfunkel records . . . and I’ve never seen him in a pair of blue jeans.

Although he has had some vocal chord issues in the past, Garfunkel will always be among the iconic voices of the soundtrack of my generation. Some would say that Paul Simon, who wrote many of those wonderful songs in the Simon and Garfunkel catalog, was the creative force of the duo. I am not in that camp and won’t quibble about it. Simon and Garfunkel together were, and are, brilliant. Separately, they are just as brilliant.

I had the opportunity in interview Garfunkel for an advance story in Packet Media for the McCarter show. He can be prickly in interviews and he does not suffer foolish reporters lightly. But I had done my homework ahead of the interview and I found him to be pleasant and engaging during the 35-minute conversation. The interview included his recollections on the making of his second solo album – “Breakaway” from 1975 – that will appear in my book “The Vinyl Dialogues Volume III: Wax On,” due out this summer from Biblio Publishing.

Garfunkel – who sometimes refers to himself in the third person as “Artie” or “Arthur,” both in interviews and onstage – still has the remnants of voice issues these days. To my untrained ear, it took him about three songs and some throat clearing to get on track at the beginning of the Princeton performance. Does he sound the same at age 74 as he did age 28? It’s pretty close, but maybe not. Neither does Paul McCartney, Elton John or Brian Wilson of the Beach Boys.

The Princeton audience was treated to a combination of songs and what Garfunkel called “poems” – readings of things he has written that will appear in his as yet untitled autobiography, scheduled for release in 2017. The poems included memories and perspectives that gave historical context into the songs he would sing that evening, accompanied on acoustic guitar by Tab Laven, who was simply outstanding. Garfunkel’s slightly uptempo version of “The Sound of Silence” was particularly compelling.

Read what you will into previously published media accounts as to his current relationship with Simon, but Garfunkel revealed in both his interview with me and onstage during the performance that he holds Simon in high regard. His favorite songwriters, he said onstage, included Stephen Sondheim, Simon, Jimmy Webb, James Taylor and Randy Newman.

The Princeton performance also provided a glimpse into Garfunkel’s personal life, as his young son Beau introduced him to the stage at the beginning of the show and appeared with his iconic father during the final bows of the evening. Garfunkel made no secret of his love for, and pride in, the lad.

And even though “The 59th Street Bridge Song” wasn’t in the setlist, I walked out of the show feelin’ groovy.

Would we like to see Simon and Garfunkel reunite for one last run of concerts? Most certainly. If it doesn’t happen, though, they’ve already given us a lifetime of great music and memories, both together and individually. In that regard, they don’t owe us any more.

But for one night in Princeton, half of Simon and Garfunkel was pretty darn good from where I sat. And for the woman sitting next to me, now a mother herself, it helped give greater meaning to the soundtrack of her life and to what once were those insufferable camping trips.

And I think we owe it to our children and future grandchildren to make sure they know the significance and great gift that is Simon and Garfunkel.