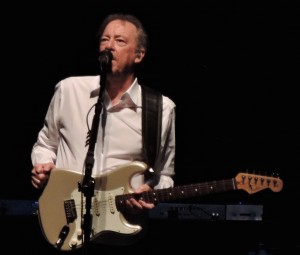 Boz Scaggs performed all his hits, along with some newer songs, April 14, 2016, at the Keswick Theatre in Glenside, PA.
(Photo by Mike Morsch)

When Bobby Caldwell had a hit with “What You Won’t Do For Love” in 1978, one of his label-mates at TK Records was Boz Scaggs.

And officials at TK Records recognized the similarities between the two artists.

“Disco was burning out. But don’t forget, three years prior to me releasing my first album, Boz Scaggs had the ‘Silk Degrees’ album. That kind of like almost ushered in that type of path for me. And TK Records took full advantage of that,” said Caldwell in an interview I did with him for “The Vinyl Dialogues Volume III: Wax On,” due out this summer. “I did recognize myself that there were some similarities between myself and Boz, especially in the music we grew up on.”

Many of us had Scaggs’ “Silk Degrees” album in 1976. It went to No. 2 and spent 115 weeks on the Billboard 200 albums charts. The album featured the singles “Lowdown,” which made it to No. 3 on the Billboard Hot 100 singles chart in 1976; and “Lido Shuffle,” which made it to No. 11 on the singles chart in 1977. It’s a great album with a great album cover. If I ever get a chance to interview him, I’ll have to ask if he knows the name of woman whose hand is barely visible on the back of bench at the far right edge of the cover.

I’d never seen Boz perform live. But a rare opportunity to attend a weeknight concert – which normally isn’t possible due to work commitments – presented itself April 14 to get the lowdown on Boz live at the Keswick Theatre in Glenside, PA, well . . . The Blonde Accountant and I made like a beeline, headed for the border line and decided to go for broke on the tickets.

And man, did we have great seats. About 15 rows back and dead center. It was so dead center that most of the photos I took of Boz show the microphone squarely in the middle of his face.

And he didn’t disappoint. Musically, his voice is still strong at age 71. He’s not talkative between songs and he doesn’t smile much, but those aren’t necessarily criticisms. And he’s surrounded himself with some excellence musicians and backing vocalists which only added to the enjoyment of the show.

The music leaned heavily on rhythm and blues, which wasn’t a surprise given Boz’s history. In fact, and maybe this is just my perception, but it appeared that – veteran performer that he is – Boz is well aware that many of us were there to hear “Lowdown,” “Lido Shuffle” and “Look What You’ve Done To Me” (from the film “Urban Cowboy” in 1980). And certainly he delivered those with a laid-back enthusiasm. But he seemed to put more emotion into the blues tunes, which were equally impressive and enjoyable.

And yes, we all sang the “whoa, oh-oh-oh” part on “Lido Shuffle.” Loudly. Really, isn’t that one of the songs that we all turn up on the car radio so we can loudly sing along?

One unusual thing – and again, that’s not to say it was bad – was that Boz closed the second encore and show with a ballad called “There’s a Storm Comin’” by Richard Hawley. It’s a beautiful song with some great guitar. But most of the concerts I’ve attended over the years have ended with a tune that got people up, out of their seats and dancing. This show closer was notable for it’s change of pace. And it’s probably just as well because at my age, getting up and dancing at a concert for any extended period puts me in jeopardy of needing a hip replaced.

Boz Scaggs is one of those artists who made up a portion of the soundtrack of my life. He certainly contributes to my theory that we did indeed have the best music in the 1970s.

If you get a chance to see him in concert, do so. It was a great show.

Lost in the love of Air Supply for three decades