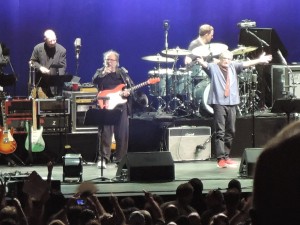 Steely Dan, with Walter Becker, left, and Donald Fagen, performed “The Dan Who Knew Too Much Tour 2016” July 3 at the BB&T Pavilion in Camden, N.J.
(Photo by Mike Morsch)

Here the thing: If you’re a Steely Dan fan and you’ve paid to see the band in concert, then you cannot get up and go to the restroom just as the artists are breaking into “Reelin’ in the Years.”

I understand that those of us who grew up with Steely Dan over the past 40-plus years may be at an age where the frequency of using the facilities may be more challenging to us at this age than it was in our younger days.

Surely one can reel in the bladder for the 4:37 of the song while its being played live.

Apparently not, as evidenced by the two women sitting in front of me at the July 3 Steely Dan show at the BB&T Pavilion in Camden, N.J., who missed the entire song.

It was, however, only a minor distraction from what was otherwise another outstanding show by Steely Dan, which featured Steve Winwood as the opener (more on him later).

You know that old saying – made popular by those of us who grew up in the 1960s and 1970s – that “we got to see all the good bands.” Well, let the record show that we were right. And we’re fortunate that one of the good bands is still around for us to see today. 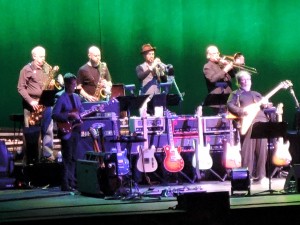 For nearly two hours, Steely Dan did what it does, perform the music that it has made for nearly five decades – that great jazz rock, smooth groove, with a some funk and R&B thrown in. The Dan only toured for a few years in the early 1970s, then became mostly a studio-only band until hitting the road again in 1993. And it has been touring fairly regularly ever since.

The core members – Fagen and Becker – have remained the constants, and have surrounded themselves with a revolving cast of talented musicians and backing vocalists. “The Dan Who Knew Too Much Tour 2016” features a stellar lineup, what Becker called “the best Steely Dan band we’ve had in our careers.”

The setlist included all the hits and then some: “Black Cow,” “Hey Nineteen,” “Kid Charlemagne,” “Bodhisattva,” “Do it Again,” “Deacon Blues,” Josie” and “Peg” to name a few. The encore was “Pretzel Logic,” the title track from the 1974 album. Noticeably absent from the set was the band’s highest charting single, “Rikki Don’t Lose That Number,” which reached No. 4 on the Billboard Hot 100 chart in 1974.

It was the first time I had seen Steely Dan live and the band did not disappoint. And it has been a particular pleasure to go back searching for the Dan’s vintage vinyl at record stores in an effort to revisit its early efforts and gain a further appreciation for what the band brought to that rich music scene of the 1970s.

I got exactly what I hoped for from my first Steely Dan concert. If there was a surprise during the evening – and surprise may not be the correct word given his career accomplishments – it was that the Steely Dan crowd was very much into Steve Winwood as well. 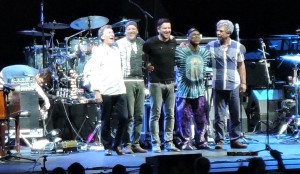 Steve Wijnrood, left, and his band take a bow after their set opening for Steely Dan.
(Photo by Mike Morsch)

Winwood, also surrounded by a group of stellar musicians, presented a nine-song set and received five standing ovations from the appreciative crowd.

Consider that for a moment. Nine songs, five standing ovations. I’m not sure I’ve ever seen an opening act get that amount of love and respect. Winwood has scheduled 22 dates with Steely Dan this summer.

His set included two songs from his days with the Spencer Davis Group – “I’m the Man” and “Gimme Some Lovin’”; three songs from his time with Traffic – “Pearly Queen,” “Low Spark of High Heeled Boys” and “Dear Mr. Fantasy”; and his No. 1 hit single, “Higher Love,” which topped the charts in 1986 and earned two Grammys for Record of the Year and Best Male Pop Vocal Performance.

“You’re in for a treat when Steely Dan comes out later on,” Winwood said to the adoring throng three songs into his set. “Until then, we’ve got some music for you.”

Boy did he ever.

What wasn’t a surprise, of course, was that an evening with Steve Winwood and Steely Dan was a few hours of high quality entertainment, musicianship and great music. It was a bucket-list kind of a night.

As an aside, I’m always hopeful for an unbilled walk-on at the shows I attend. Every once in a while, Bruce Springsteen will walk on to a Southside Johnny Show. Just recently, Billy Joel did a walk-on with the band Big Shot, which just happens to include several members of his touring band.

The night after the Steely Dan show, right next door to the BB&T Pavilion in Camden, N.J., the town’s Fourth of July celebration was to be headlined by Michael McDonald. In addition to a successful stint with the Doobie Brothers starting in 1976 and a subsequent and equally successful solo career throughout the 1980s and 1990s, McDonald was a member of Steely Dan’s touring group in 1974.

It would not have been out of the question – at least in my mind – that since McDonald was performing the next night 100 yards from the BB&T Pavilion, that maybe he might already be in town, make a guest appearance and lend his voice to some of the Steely Dan hits on which he contributed in the 1970s.

But it didn’t happen, which was OK. Steely Dan and Steve Winwood didn’t need any help giving us our money’s worth.