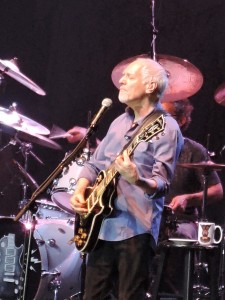 In a conversation with a newsroom colleague earlier this week, I mentioned that I was going to the Peter Frampton concert June 14 at the Sands Casino in Bethlehem, PA.

“Is it an acoustic show or a full band concert?” he asked.
“I don’t really know. I’ll have to check,” I said.

The question slipped my mind until later that evening. While sitting in the easy chair with the computer in my lap, I happened to be looking at Twitter and noticed some tweets from Frampton, whom I follow on that social network.

My experience with artists on Twitter has been mixed. I know, for example, that David Crosby and Howard Kaylan from the Turtles respond to tweets themselves and I have had exchanges with both. But I also know that many artists, like Brian Wilson and Al Jardine from the Beach Boys, Daryl Hall and John Oates, and Peter Beckett and Ronn Moss from the band Player, hire people to run their social networks because I worked directly with those folks.

The tweets I saw that evening by Peter Frampton suggested that it actually might actually be him doing the tweeting. Now I could have easily gone to his website to see if the Bethlehem concert was an acoustic or full band show, but I chose the lazy way out. Since I was already looking at Twitter, I thought I’d just ask Frampton himself.

So I typed “@peterframpton Is tomorrow night’s concert at the Sands Bethlehem an acoustic show?” 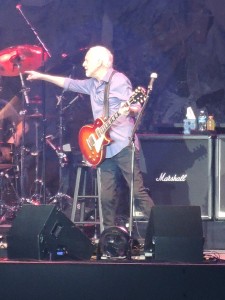 Within a few minutes, I got a response: “Summer shows r w/my incredible band. Spring and fall are the RAW acoustic shows. Can you pass this on pls? Thx ;-).” That little thing at the end is a winking emoji.

“I think Peter Frampton just winked at me on Twitter,” I said to The Blonde Accountant, who was in the kitchen at the time.

“Did you wink back?” she asked.

Well . . . no, I didn’t. But as a chronicler of the stories behind the making of the music of the 1970s, I’m happy to pass along any pertinent concert information to my circle of music friends.

The show was a full band show, and it was the first time I had a chance to see Frampton live. Cross that one off the bucket list. Now all that remains on my Frampton Wish List is an opportunity to interview him for The Vinyl Dialogues series.

Of course, what I remember most fondly about his career was the “Frampton Comes Alive!” album, which is celebrating the 40th anniversary of its release this year. That’s one of the albums I grew up with in that glorious decade of music. 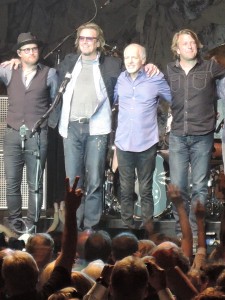 Band members and Frampton take a bow after the show. From left to right are Adam Lester, Paul Peterson, Frampton and Rob Arthur. Not pictured is drummer Dan Wojciechowski.
(Photo by Mike Morsch)

Who doesn’t love the hits off that album? I was 16 at the time, and my girlfriend loved to make out to Led Zeppelin’s “Stairway to Heaven.” I liked the making out part, but I hated that song. I thought Frampton’s “Baby, I Love Your Way” made a much better background for making out in 1976. Turned out I learned an early lesson on the advantages of compromising for the greater good.

Of course, those of us who grew up with his music in the 1970s recall Frampton’s long, curly blonde locks on the cover of “Frampton Comes Alive!” But the days of being one of the decade’s Hair Gods is gone for Frampton, as it is for many of us. That should be of no concern to him or us, though, as Frampton’s considerable artistic skills and musicianship have not receded in the least.

As for the Bethlehem show, it was vintage Frampton. Lots of guitar and lots of loud rock and roll. Right in his wheelhouse, and exactly what we came to see. And his band – Adam Lester on guitar; Paul Peterson on bass; Rob Arthur on keyboards; and Dan Wojciechowski on drugs – is superb.

I’m big on seeing artists sing their hits live, and we got “Baby, I Love Your Way,” “Show Me The Way” and “Do You Feel Like We Do,” along with the talk box effect that we all loved on the latter two singles.

But I also enjoyed the portion of the show where Frampton played three songs from his 2006 album “Fingerprints,” which won a Grammy for Best Pop Instrumental Album in 2007.

A lyric sheet of “Baby, I Love Your Way,” with Frampton’s signature in the lower righthand corner.
(Photo by Mike Morsch)

“I got a Grammy for the only album I made where I didn’t sing,” deadpanned Frampton.

In an evening filled with highlights, Frampton saved a really good one for the last encore song: “While My Guitar Gently Weeps,” written by George Harrison for the Beatles “White Album” in 1968. A few years later, a young Frampton would do session recording for Harrison’s first solo album, “All Things Must Pass” in 1970.

On this night – to the surprise of nobody I would guess – Frampton owned “While My Guitar Gently Weeps.” And that was very cool for those of us fortunate enough to witness it.

After the show, I stopped at the merch table. I’m in to signed posters now, so I always look to see if the artist has included those for purchase. There wasn’t a poster, but there was a signed lyric sheet of “Baby, I Love Your Way,” which I happily snapped up for the reasonable price of $25. A small price to pay for the fond memories of trying to control teenage hormones in 1976.

For anyone who doubted it, Frampton’s still alive. And he’s still showing us the way to a memorable evening of great music.